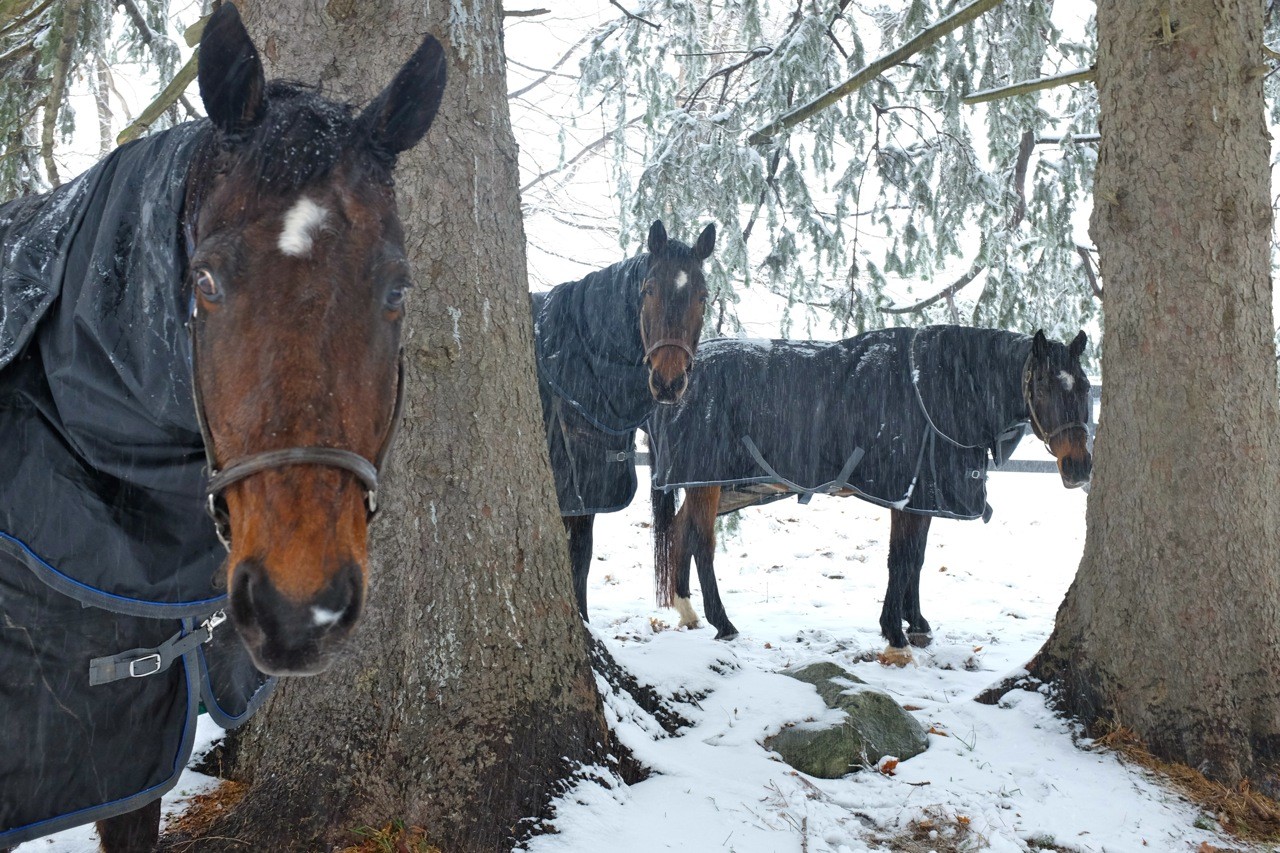 The snow began this morning and continued all day—a damp, weighty snow that piled up on the fences and trees. I took some carrots to the old boys in their pasture. All morning I’d watched them wander, roll, and huddle together, declining to make use of their run-in shed. They like it better under the big spruces.

The pasture’s back gate was frozen shut. In my giant parka, I squeezed through the fence (hood up; camera zipped inside). The view beyond my eskimo-style fur ruff was hazy with falling snow: black fences and bare, sepia trees; big, snowy spruces and white fields; grey sky.

Otter and Grappa came to me politely; Ray Ray became possessed, post-carrot. He herded Grappa along the fence, then lunged in my direction. I flapped my arms and kicked up some snow. He dodged away, tossing his head. Finally he walked back to me, looking sheepish. As his newly retired, field-dwelling self, he can’t decide whether to fight or make friends. He means well, I think—but social skills aren’t his strong suit.

Ray Ray chewed Grappa’s blanket while Grappa pawed emphatically at the snow. Otter stood close to me, breathing into my hood. I love that: snowy whiskers and warm, damp breath on my face. Otter is one of the kindest animals I’ve ever known.

These boys are a matched set—bay with white stars and hind socks—but as different, personality-wise, as three horses could be. Even from a distance, in their identical blankets, it’s easy to tell them apart. Otter’s languid walk and arched neck. Grappa’s long, thin tail and ambling gait—tending toward shuffly in his old age. Ray Ray’s dinosaur-sized head and taller socks. Usually Otter and Grappa stick together, and Ray Ray wanders on his own. Ray Ray’s tail is shorter than the others’, and he holds it up like a horse in a hunt print. Grappa often stands and stares in fascination at some activity that I can’t see, beyond the fence. Otter keeps an eye out for Grappa, chasing Ray Ray away if he pesters Grappa too much.

Tomorrow’s forecast says sun and clouds. Looks like we’ll have a bright, snow-covered farm for the holiday. 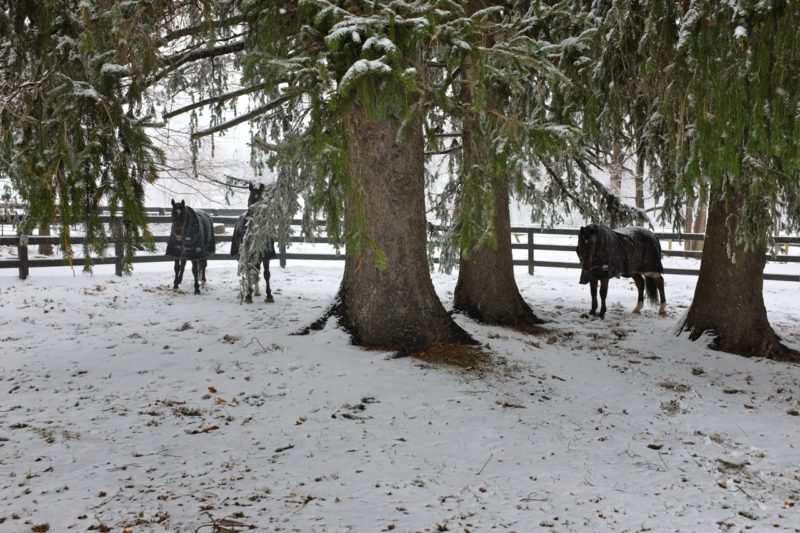 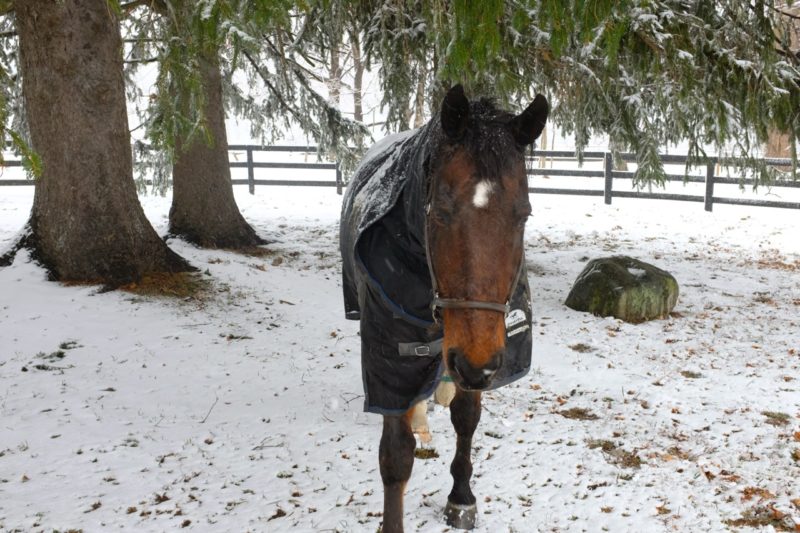 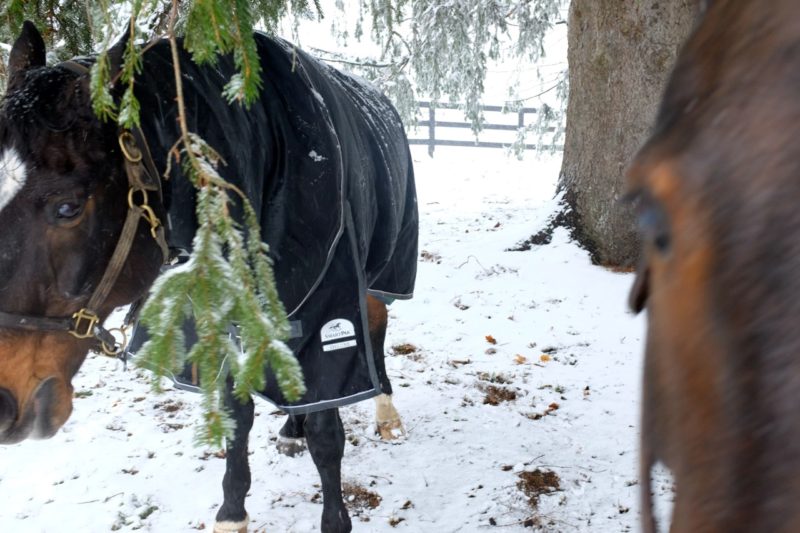 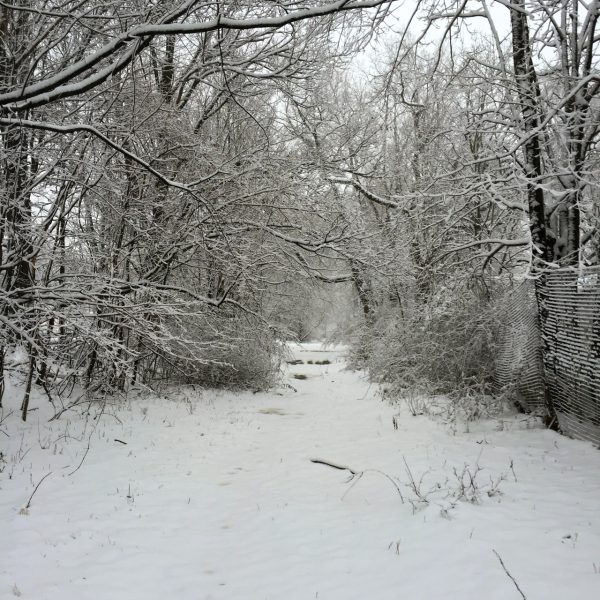 The snowy lane, on a walk home from the barn