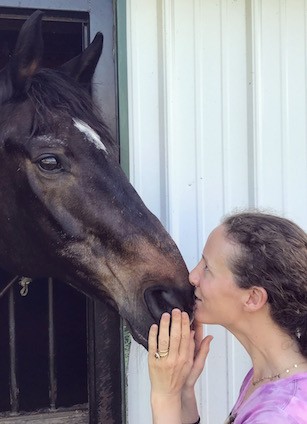 Grappa Lane is named for my extraordinary horse Grappa, seven-time national champion and the embodiment of vitality and style. He has been with me twenty years, more than half my life. A dappled bay with cresty neck and bright eyes, he is a teacher and an old friend. He reminds me every day how I want to live: with gratitude, joy, curiosity, class, and a little mischief. As a show horse with a wild streak, he taught patience, diligence, and total presence. He inspires appreciation of beauty.

In this spirit, I write about conscious living, on the farm and beyond. My husband, Philip, and I are bringing new life to an old Connecticut farm… READ MORE

The Best Horse trophy at the US Equestrian Team Talent Search Finals is named after him. Teenage rider-girls all over the country discussed him in Internet chat rooms. He almost became a Breyer horse model. (Breyer, you shoulda done it!) Grappa is one of the all-time greats of the sport. He won seven national equitation championships. At age 25, he attended our wedding at Philip’s family’s farm. He posed handsomely for portraits in his old-pro-in-front-of-the-camera way, dappled and miraculously youthful.

He’s a well-named horse, as fiery as the Italian after-dinner drink. He bucked off most of his riders. When he focused… READ MORE

Sarah is a rider, horse breeder and writer. She owns and operates Turnabout Farm, breeding and developing top-quality jumpers and western reining horses. She serves on the National Advisory Committee of the US Equestrian Team Foundation and on Horse Network’s Board of Advisors.

As a hunter-jumper, she was one of the most successful riders of her generation, winning multiple national equitation championships, Open Jumper Grands Prix, and the intercollegiate Individual National Championship. She received the National Horse Show’s Sportsmanship Award and was named US Equestrian Federation Junior Equestrian of the Year, Chronicle of the Horse Hunter Horseman of the Year, and… READ MORE