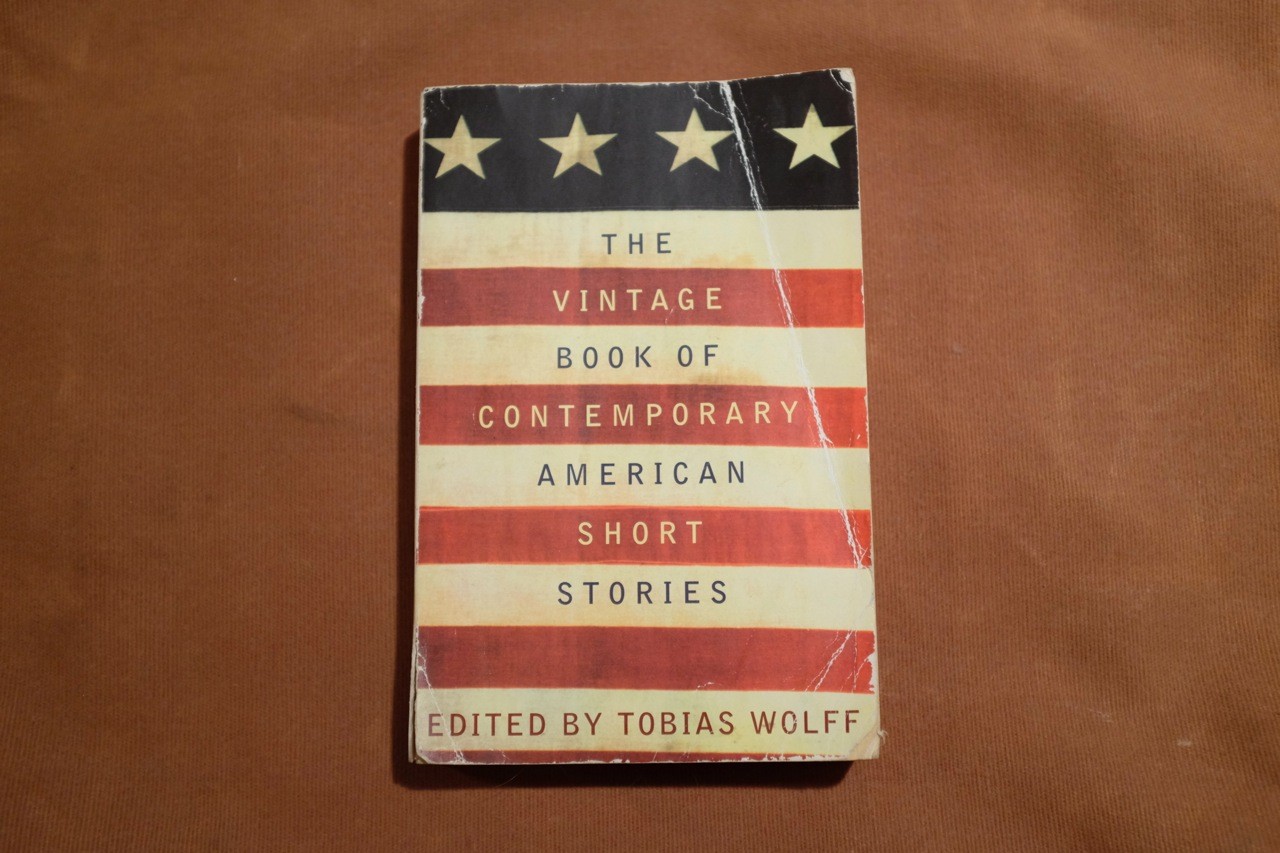 “A few years ago I met a wheat farmer from North Dakota,” writes Tobias Wolff,

“and couldn’t stop myself from asking him how he kept from going crazy in all that windblown solitude. He did not seem to find the question peculiar. He told me that when he was out in the fields he brought along a Walkman and listened to short stories on tape… He and his wife read them aloud to each other, and to their tape recorder, at night and during the long winter afternoons when the snow held them housebound. They kept the stories they liked and erased the rest. He named some of his favorites, and from the way he spoke about them it was clear they had become part of his life.

Stories becoming part of our lives: a fitting theme for Wolff’s introduction to this collection, which has become part of mine. My copy of The Vintage Book of Contemporary American Short Stories has traveled thousands of miles with me—from Palo Alto to Boston, Florida to The Netherlands, back and forth between Manhattan and our Ridgefield farm.

Some of the characters feel closer than old friends: Edward P. Jones’s young girl in her checked cotton dress and Dixie Peach hair grease, holding her mother’s hand on the steps of the school that has turned her away; Barry Hannah’s pale and precocious Quadberry toting his saxophone through a cornfield; Joy William’s lonely, nine-year-old Danica writing postcards to her dog; Stephanie Vaughan’s military kids carving their skates across the Post ice rink in the cold, bright sun; Robert Stone’s alcoholic psychotherapist watching his wife’s desolate posture at their bedroom window; Denis Johnson’s drug-addled Emergency-Room workers lost in an old truck at night, finding miraculous beauty in a sudden snow.

I was one of the lucky Stanford undergraduates who studied with Wolff, in a freshman humanities course, then an Intermediate Fiction workshop. For the latter, this anthology served as textbook. We’d sit around a table—twelve students, and Wolff—learning to critique each other’s work, and studying the craft of these published stories he loved. He spoke in a measured, sonorous voice, incisive in his feedback and yet respectful of our dignity (the holy-grail combination of workshop-instructor qualities).

Of course I was eager for signs of his approval. We all were. The irresistible impulse: who will win the famous writer’s favor? But none of that matters much, compared to the greatest gift of his teaching: that infectious passion for the stories, the magic of what great fiction can do to us—why we read, and why we write. I think of him leaning toward us over his open book, his eyes shining. He’d read a passage from Raymond Carver or Joy Williams and marvel at the language, or delight in the humor—not the jokes-as-distraction kind of humor, but the kind that cracks open the window to our vulnerabilities and desires.

Take Ralph Lombreglia’s “Men Under Water,” and the unforgettable bald, corpulent Gunther preparing to drag the narrator on a celebratory scuba-dive in the pool:

He pounds upstairs. When he comes back down, he’s in his trunks, a total embodiment of what it is to be flesh. He tosses me an extra pair. They’re like a hot-air balloon or a parachute. I put them on in the bathroom and come out holding a yard of excess suit behind me. Gunther has the stapler from his desk. He staples the trunks until they stay up by themselves.

‘Just a quick dip in the low end here, Gunther,’ I say. ‘I have to get home for dinner.’

But of course Gunther has other ideas, and we watch the narrator go along despite his misgivings.

Or Carver’s “Cathedral,” that masterpiece of the conversational voice:

This blind man, an old friend of my wife’s, he was on his way to spend the night… I wasn’t enthusiastic about his visit. He was no one I knew. And his being blind bothered me. My idea of blindness came from the movies. In the movies, the blind moved slowly and never laughed. Sometimes they were led by seeing-eye dogs. A blind man in my house was not something I looked forward to.

The narrator is jealous of his wife’s friendship with the blind man, Robert—she worked for him one summer, wrote a poem about her last day with him, when, having asked permission, he delicately touched every part of her face, feeling the image of her. For years they’ve exchanged tape-recorded letters. The narrator sulks:

Now this same blind man was coming to sleep in my house.
‘Maybe I could take him bowling,’ I said to my wife.

By the story’s end, the narrator has moved to an entirely different plane—nothing we’d expect; nothing he expected. A new sensation, an illumination—all the more powerful for its happening invisibly within him, in his own unremarkable house, accidentally.

The stories deliver the unexpected, in ways that nonetheless feel true. As Wolff says in his New Yorker fiction podcast of Stephanie Vaughan’s “Dog Heaven,” “The best fiction suddenly illuminates that thing that’s been beside us all along and makes us see it for the first time.” These stories describe particular, vivid lives—lives that, in many cases, could be lived in our own neighborhoods.

In Richard Ford’s “Rock Springs,” the narrator steals an ophthalmologist’s Mercedes and takes off across Montana with his makeshift family, to try to give them all a fresh start. In Leonard Michaels’ “Murderers,” four boys scale a precipitous Brooklyn roof to watch the rabbi have sex with his beautiful, wig-wearing wife, the two of them dancing naked to the phonograph’s rumba. In Joy Williams’s “Train,” Danica travels home on an overnight train with her cruel friend Jane, and Jane’s bickering parents. A story of deep sadness and bitter humor; but a melancholy tenderness runs through it all, and Danica is a character I like to spend time with.

Some of the characters stick with me in darker ways: Joyce Carol Oates’s Arnold Friend transforming from amorous teenager to something much more sinister; Mary Gaitskill’s sadistic, trench-coated lover eating pizza and eyeing his prey. Mona Simpson’s “Lawns” is so unsettling that my mind deflects the memory of it—the awful, intimate, secret violence. Scott Bradfield’s “The Darling,” an homage to the Chekhov story of the same name, bounds headlong through a series of crimes, and like the characters in the story, we can’t help but sympathize with the murderess.

We need to feel ourselves acted upon by a story, outraged, exposed, in danger of heartbreak and change. Those are the stories that endure in our memories, to the point where they take on the nature of memory itself. In this way the experience of something read can form us no less than the experience of something lived through. Even more, sometimes, because so much of what we live through comes to us disguised as routine, or at a moment when we’re too well defended to receive it. But when we read we are alert and undefended, and liable to be struck hard.

Of the stories in this book, he says, “You will take them with you when you think you’ve finished them, and that’s when they’ll really go to work.”

You can hear him reading two of these stories on the New Yorker fiction podcast: Denis Jonhson’s “Emergency” and Stephanie Vaughan’s “Dog Heaven.” Like that North Dakota wheat farmer, I love to hear a great story read aloud, by a familiar voice—or the voice of someone who feels the story’s enchantment.