At the Saratoga Races 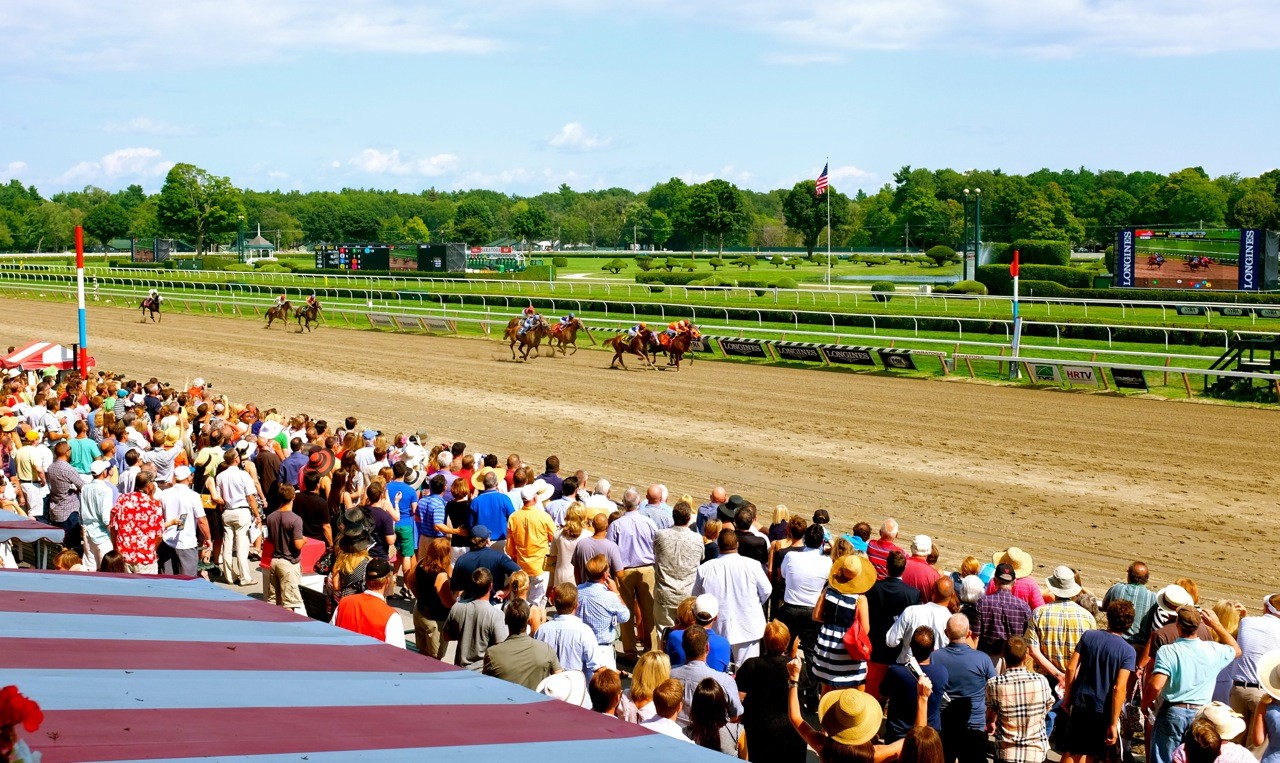 I’ve been to the races only a couple of times, so it was a treat last weekend to go with our friend Vivien Malloy, a longtime breeder and horsewoman. She gave my husband his first pony when he was four years old: Fifi, a little chestnut sweetheart loved and outgrown by Vivien’s kids. We watched the races from box seats, walked the auction barns and looked at yearlings, and scarfed a decadent dinner at the evening auction, where Vivian sold a few homebreds and bought an exciting filly by Medaglia d’Oro, sire of the great Rachel Alexandra, first filly to win the Preakness in 85 years.

We toured the backstretch in early morning—saw the stables and watched horses working. A few practiced starting in pairs from the gate. We stood by the track, very close. They burst out and rocketed away, hunkered down together on the inside rail.

Starting gate off the backstretch, for training 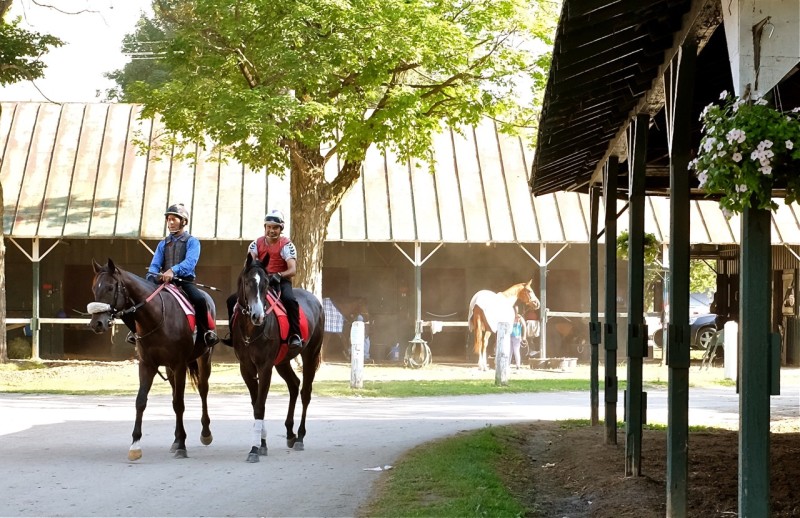 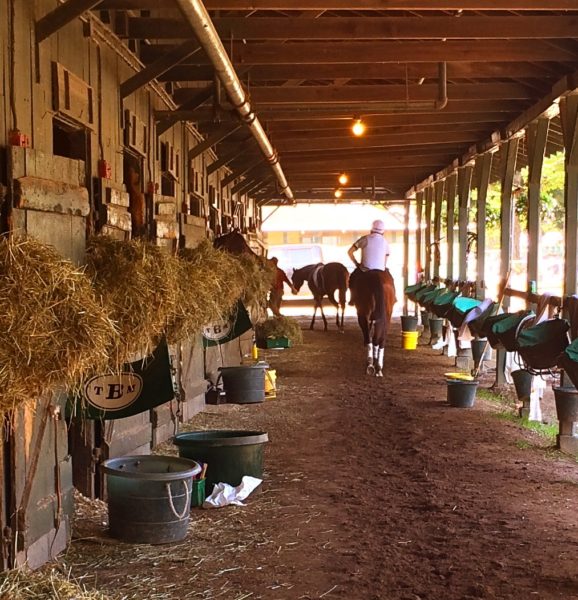 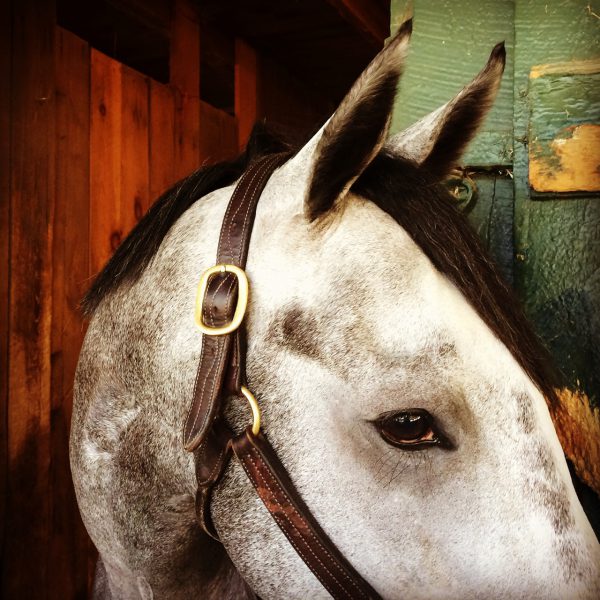 One of Vivien’s horses

I used to ride in the horse show here, and this track might have been the one I found on a trail ride many years ago. It was empty, the footing hoof-mark churned, entry chains down; I took my horse for a slow gallop—how could I resist?—and immediately a guard golf-carted over and shooed us away. My horse, Arabian, was a blocky Swedish Warmblood with paint markings, long ears, enormous eyes and a Roman nose. We must have been a comical sight, with his slow-motion, big-hoofed gallop. I knew he wouldn’t run off with me; usually it was a struggle to make him go forward at all. I’d leg him and he’d grunt instead of accelerating. (Though he could hop Olympic-sized jumps with very little effort at all.) 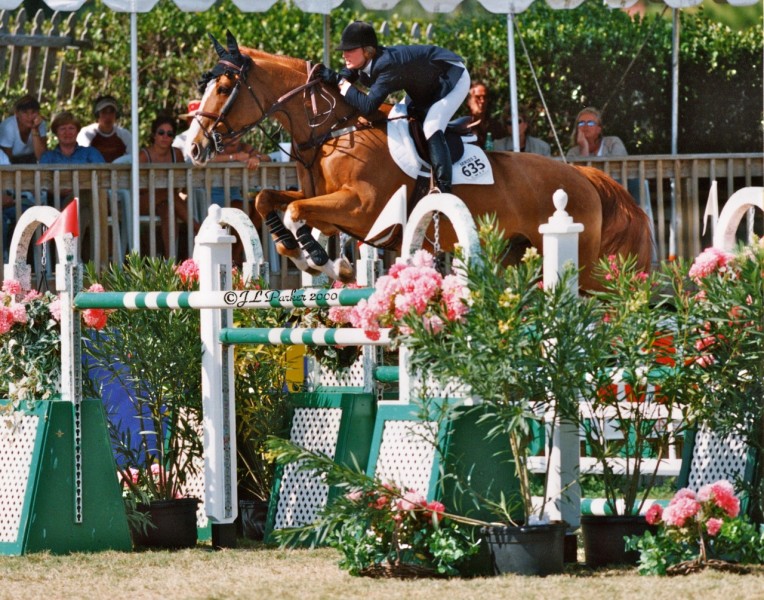 For contrast, here’s my old junior hunter Caped Crusader, a grandson of Secretariat and one of the last classic Thoroughbred hunters in a sport that’s now overrun with stockier and quieter European Warmbloods. Thoroughbreds can be harder to tame—Caped Crusader wasn’t easy, but he was gorgeous and old-school stylish: 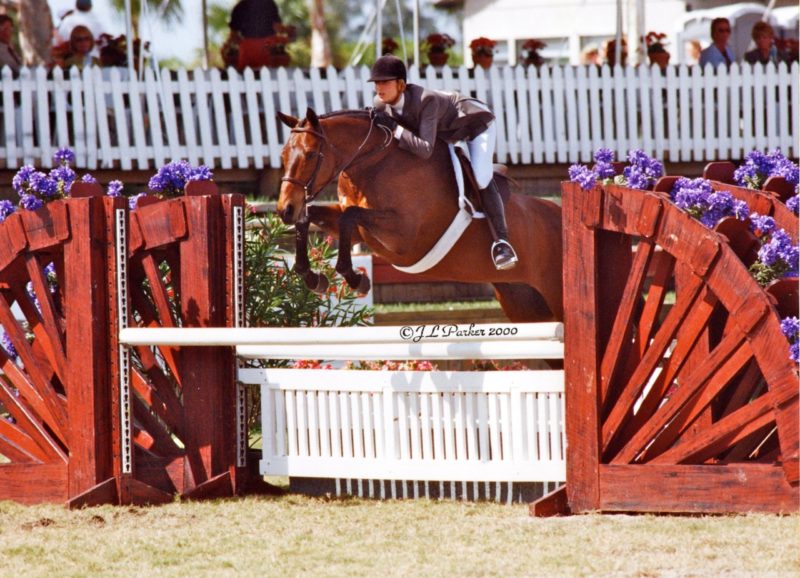 There’s something so chic about racetrack thoroughbreds: their lanky, muscled bodies and fine necks, unruly and greyhound-lean, tugging the reins. They want to run. Vivid silks and pre-race ponying excitement: horses kept calm but just barely, the jockeys alone can’t hold them. Tense moments in the starting gate, one of them won’t go in, then finally does. And they’re off! Gates clang open and horses crowd the rail, a pack of thundering slender legs; the crowd yells. The way the hurtling pack resolves into some horses trailing, some battling to lead. That feeling when one makes a move in the final turn—finds another gear and opens its spidery, reaching stride past the rest. Jockeys crouched low, blazing in dirt-spattered candy colors through the finish.

Before the sixth race—two-year-olds on the turf—we went to the paddock. It’s Saratoga tradition for each horse to walk, pre-race, around the tree numbered with his or her post position. Vivien led us straight to the seven horse: Designed for War, a gorgeous bay colt by War Front. The colt ambled coolly and chewed his bit in a babyish way. Fluid muscle under dark coat, a confident eye; unbothered by the crowd.

He led the race wire to wire, galloping ahead by several lengths and still gaining ground at the finish. That magical whole-different-species look when a racehorse leaves the rest bunched together in his dust: my spine tingles. “That horse is going to win a lot of races,” Vivien said. 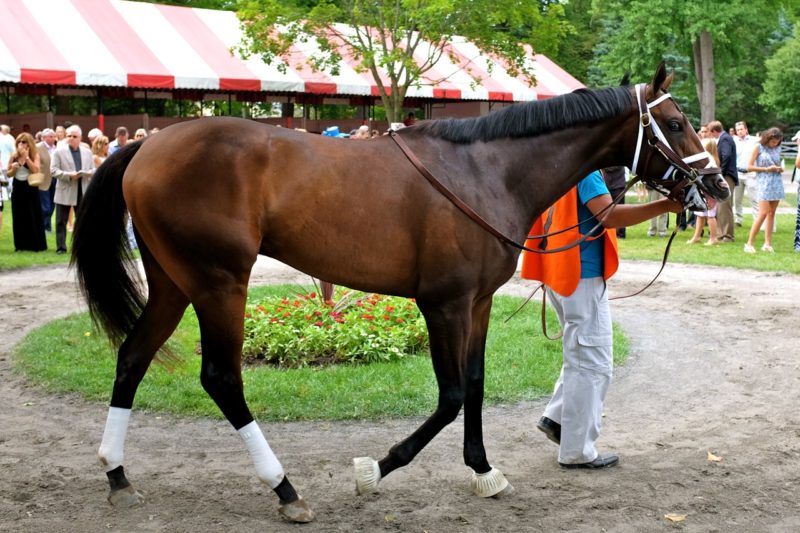 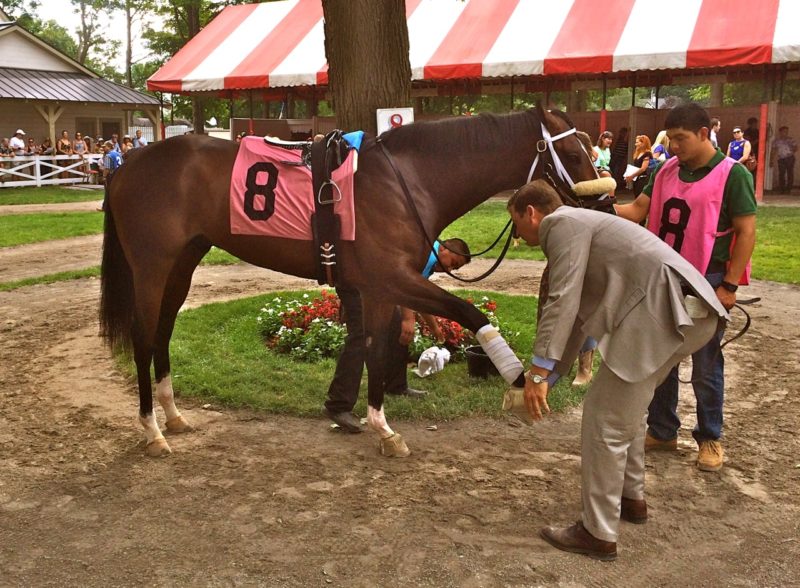 The eight horse gets a stretch after being saddled. 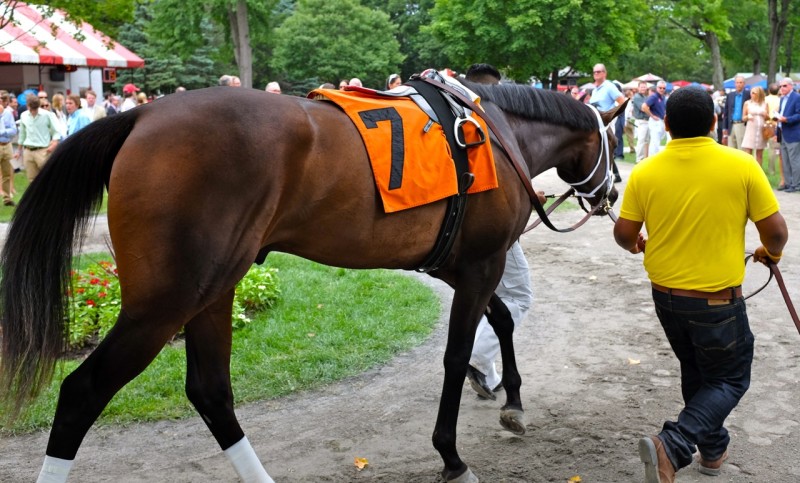 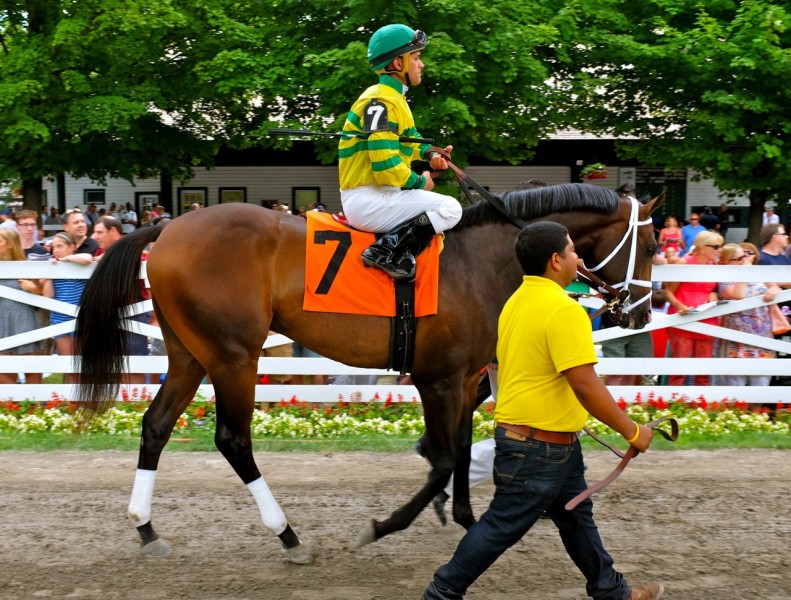 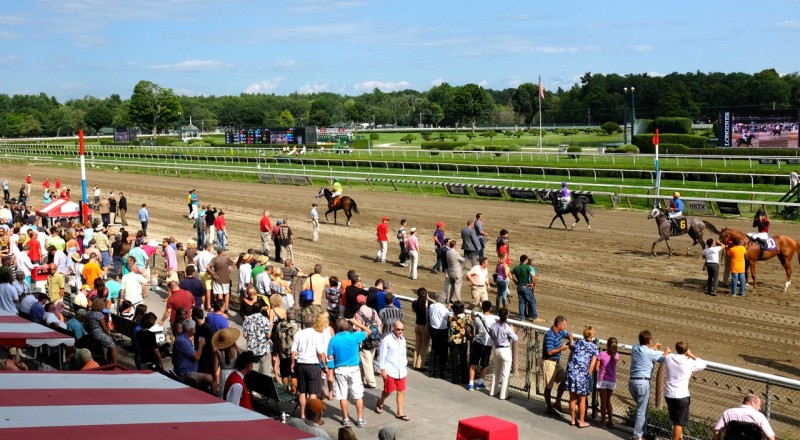 Sunday morning we found the Matz family at the Oklahoma track. Michael Matz is the show-jumping legend who switched to training race horses and won the 2006 Kentucky Derby with Barbaro and the 2012 Belmont Stakes with Union Rags. He was my husband’s jumper trainer for a while, and they’re good friends.

We arrived just in time to watch the fabulous Stakes-winning mare Somali Lemonade breeze on the turf track: dainty, pony-ish trot to warm up, a few moments standing calmly by the rail. Turn toward racing direction, and she’s off at an easy gallop. Really opens up on the far side; graceful, rocketing gallop through the turn and home stretch: fast half-mile time, a good workout.

Nearby, another trainer spoke to his exercise rider through a walkie-talkie-to-earpiece setup. “Put your hands down and lean,” he said into the device, “like riding a motorcycle.”

Back at the barns, Somali walked to cool out, stopping occasionally to drink from a bucket placed there just for her. Michael’s wife DD pointed out the bay grazing in front of us: Tonalist, the 2014 Belmont Stakes winner. 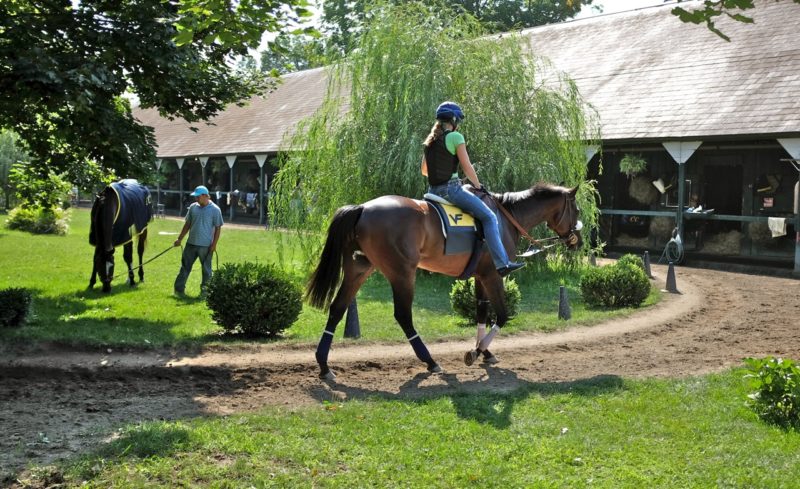 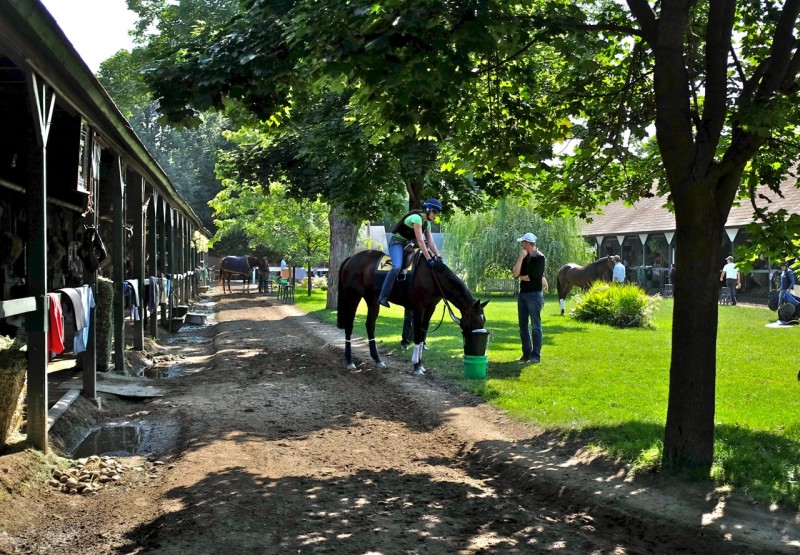 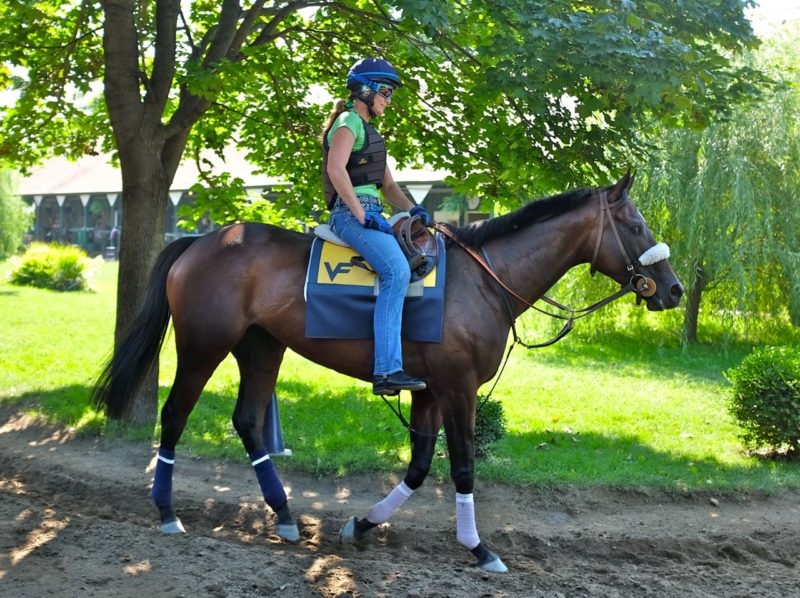 Three years ago my husband’s grandfather’s mare Sky Beauty was inducted into the Racing Hall of Fame here. My husband spoke at the ceremony. Here’s her tile in front of the Saratoga spectator gates. (Secretariat’s is nearby, not because he won the Triple Crown, but because he won here, too.) 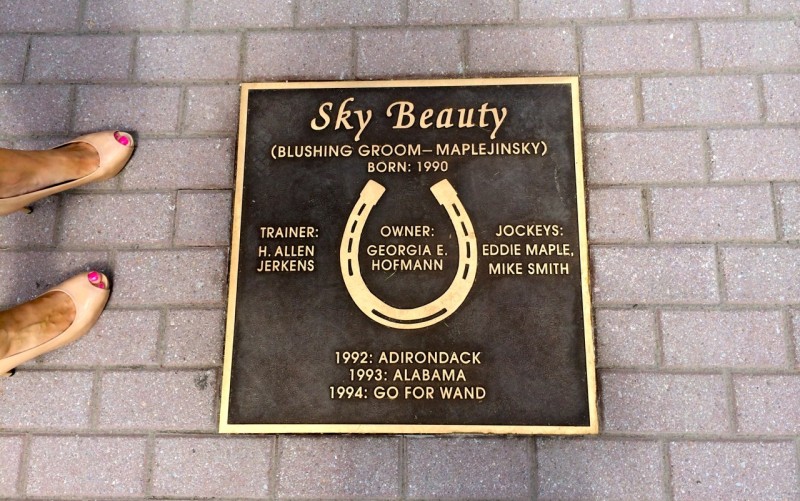 And a look back at one of racing’s all-time thrills. Secretariat’s world record still stands: a dirt-track mile and a half in two minutes twenty-four seconds.