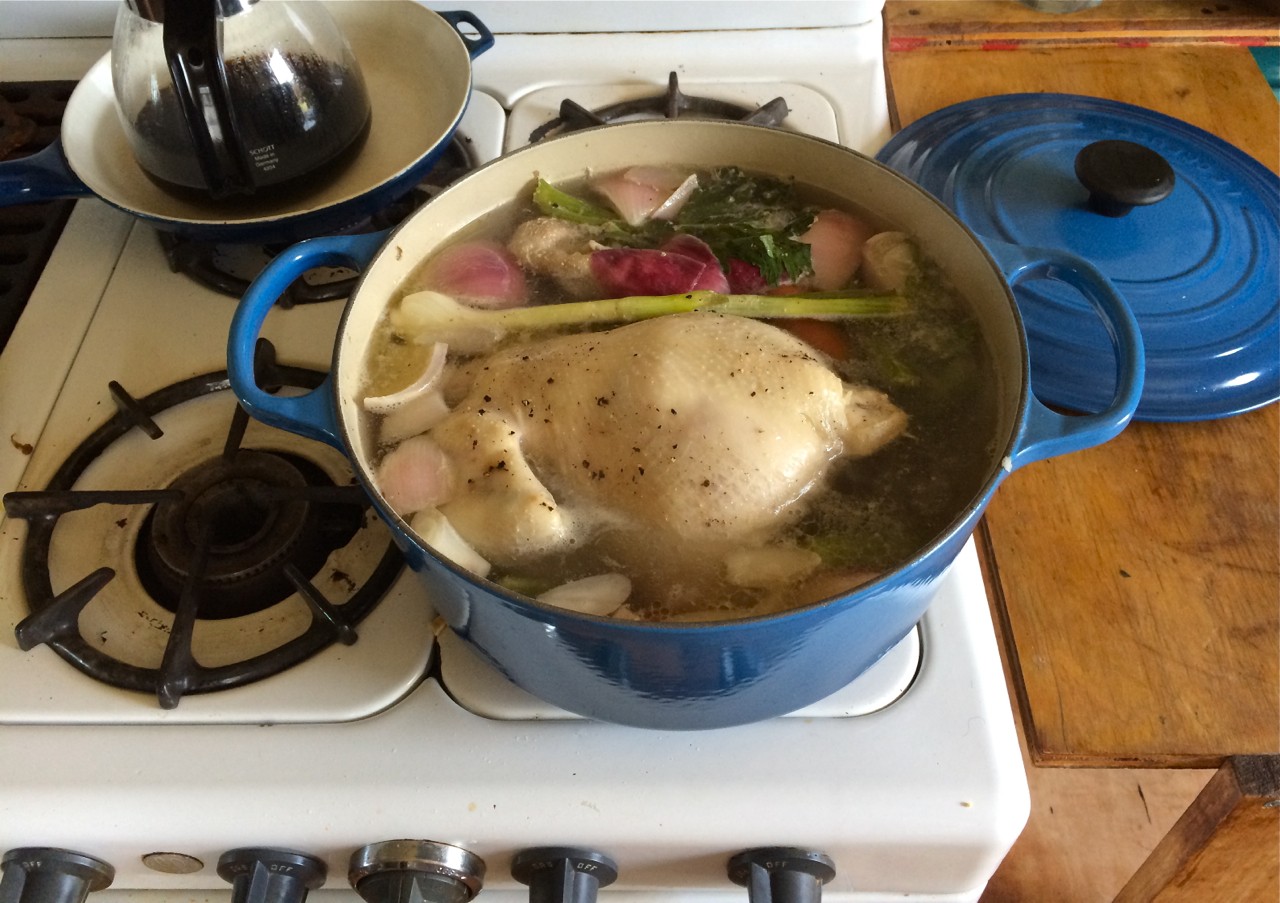 Better than a multi-vitamin, and soothing to the stomach: bone broth is Chinese Medicine’s miracle elixir. This according to my fabulous acupuncturist, Aimee Raupp, author of two popular books on natural health and beauty. She recommends a cup of bone broth a day, to improve digestion and immunity; calm inflammation; balance hormones and enhance fertility; strengthen hair, skin, nails and joints; support your nervous system and lift your mood.

The key is to make it the right way. Use organic, free-range chicken. (Factory-raised chickens are not as nutritious.) Before you turn on the heat, let the whole concoction sit for at least half an hour—including those two spoons of vinegar, which helps to draw the minerals from the bones.

Yes, it has to simmer for hours. But prep time is almost nothing. And the boxed stuff just isn’t the same. Use a whole chicken and save the meat for quesadillas or chicken salad. Freeze the broth in batches to have on hand for quick lentil soup, or use some of the meat and broth right away for classic chicken soup.

Aimee prescribes bone broth to enhance what Chinese Medicine calls our Jing—our essence or life force. Science supports the ancient tradition. Bone broth contains healthy fat and protein; calcium, magnesium, phosphorus and other minerals; collagen and gelatin; glucosamine and chondroitin. (Read more about the science here.) Rather than buying all these from the supplement shelf, Aimee says, try a healing mug of old-fashioned bone broth.

1. Chop the carrots, celery, onions and other veggies coarsely. Remove the chicken wings and neck and cut them into several pieces. Add all ingredients to the pot except the extra parsley. Let stand half an hour to an hour.

2. Bring to a boil, then use a spoon to remove the scum that rises to the surface. Simmer on low, covered, for 4 to 6 hours. (I usually take the chicken out after four-ish hours, pull the meat, and throw the bones back in to simmer longer.)

3. Add the extra parsley ten minutes before you take the broth off the heat. (The parsley adds mineral ions.) If you haven’t already done so, remove the chicken and reserve for other recipes; pull the meat from the bones while it’s warm. (It’ll be falling-off-the-bone tender.) Strain the broth and discard the veggies.

4. Refrigerate until the fat rises to the top and congeals. This fat layer protects the broth from contaminants; skim it off only when you’re ready to use or freeze the broth.