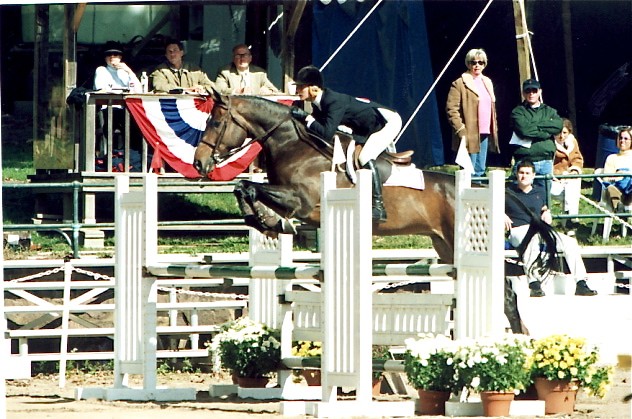 The show-horse paddocks have been fortified with higher fence height, and so far Firefly has stayed in. I’m in New York, and after a dropped cellphone call with Emily, she texted: “The connection went bad before we got to play Guess Who Jumped Out of the Paddock Today.” It was Grappa. Twenty-seven years old and still a rascal. The retirees’ big pasture is bordered by fence, pond, and stone wall. Grappa found a tumbled-down spot in the wall, hopped over, and strolled into the barn. Lesson learned: take him in from the paddock before the other horses. It seems the problem was that Otter went in first, and Grappa didn’t want to be left behind.

He’s been wild in general, with his new arthritis medicine, freshly clipped coat, and spa-grade bath and grooming by Clio. Last Thursday evening when I stopped in, Grappa heard my footsteps, whinnied, and charged his stall door. When I opened it, he practically mowed me over trying to barge out. (I kept him in; who knows what he’d have done.) I did let him rub his forehead on my back, a habit I allow him because he loves it, and I figure he’s earned it. He was extra pushy, though, and when I closed his door, he continued to whinny and walk circles, wild-eyed.

Sunday morning he was so rambunctious I had trouble getting his turnout blanket and halter on. He knew we were heading to the pasture and could barely contain himself. I put the chain over his nose and tugged it to establish some semblance of control; but once we were outside, he was polite. We were on the way to where he wanted to go. He walked briskly and lightly, an almost-trot, but didn’t pull me. In the pasture, he waited for me to unclip the lead shank, then wheeled and cantered away. Otter and Kondor followed, the three of them cantering and tossing their heads, then they all settled down to grazing in the sun.

The feature photo shows Grappa in his glory days, jumping to win the US Equestrian Team Talent Search Finals.