A Back-Patio Moment, After All Those Parties 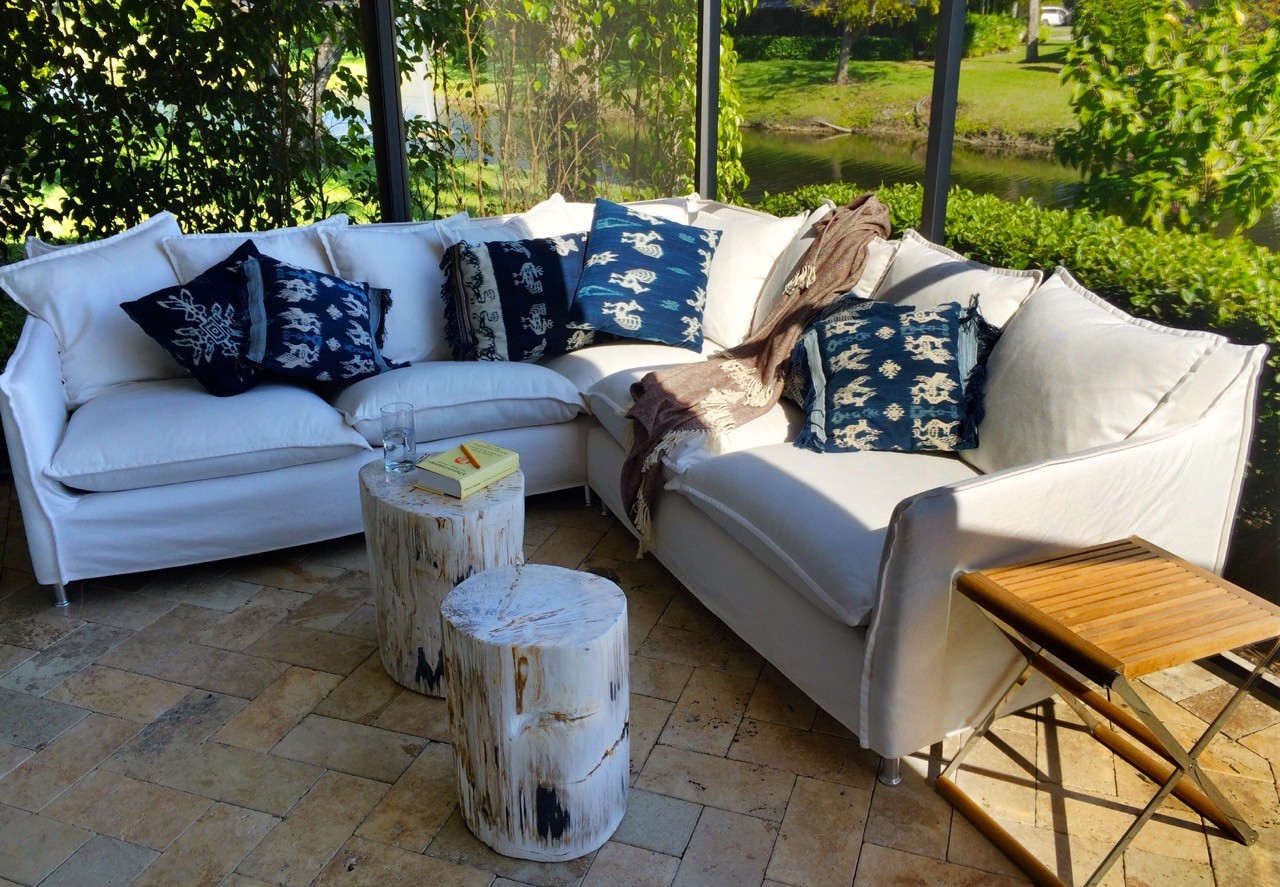 It’s seventy-three degrees in Wellington. I’m ensconced on our back patio couch. I’ve just eaten a mini lemon-meringue cake. Our red hibiscus is blooming, and the fountain in our shared lagoon makes its soothing waterfall-splash. A paradise for slowing down, breathing, napping, reading—our little oasis in the midst of Wellington.

The lemon-meringue cake was left over from the party we hosted Wednesday night, in honor of my husband’s business partners coming to town. That was the culmination of several eventful days in our household.

First was Washington Mardi Gras, a five-day, black-tie-party extravaganza. I’d never heard of it until our invitation arrived: gold-scripted and fanciful, as lavish as any wedding invitation, and emblazoned with our friend Charles’s royal monogram. He was being crowned King of the Mardi Gras, which is, in the world of Louisiana society, a huge and unmissable big deal.

New Orleans descends on D.C., taking over the Washington Hilton and its polo-field-sized ballroom. Cajun music and Dixieland jazz spill into the hotel parking court. Thousands of people with purple beads and southern drawls roam the halls, cocktails in hand. At times, the party migrates, via luxury-bus fleet, for dinner at the Italian Embassy or a more somber, ceremonial moment at Arlington Cemetery. But the main idea seems to be formal-attired, non-stop revelry.

I flew in for the final two days of it. Two nights of black tie, including the actual Mardi Gras Carnival Ball, over which King Charles presided from his satin-lined throne, while the princesses and festival queens, in a seemingly endless stream, emerged from the wings, waved their crystal-studded scepters, and promenaded along the parade route. They wore wedding dresses and tiaras. The festival queens’ tiaras reached Pope-headdress proportions, and their capes were topped with neck ruffs, in the manner of Queen Elizabeth or Dracula, only studded, of course, with thousands of crystals. The capes themselves advertised their festivals: Queen of the Strawberry Festival, the Gumbo Festival, the Shrimp Festival, the Cajun Hot Sauce Festival, the Frog Festival, the Pine Tree Festival, the Sulphur Mines Festival, the Fur & Wildlife Festival, the Smoked Meat Festival, the 4th of July Festival. The capes dragged behind the queens in long, heavy trains, and men in clownish Mardi Gras gear were stationed at every corner, to free the capes from entanglements and arrange them to display their full sequined glory.

Then came the floats—parade floats inside the ballroom—and the throwing of beads, showering of confetti, dancing in the makeshift streets, and carousing all through the night. Breakfast was served upstairs, and yet another band took the stage in this new room, where the so-called royal subjects (that’s us) could enjoy chicken and waffles and quail eggs and dance until the wee hours.

We arrived back in Wellington on Sunday and proceeded directly to the US Equestrian Team Foundation annual awards party, of which my husband was the M.C. (I line-edited his script on the plane and quickly printed it as we were getting dressed.) It was a lovely evening, much less dramatic than Mardi Gras. We ended the night scarfing house-made pasta at a local spot we like. It was chilly outside, by Wellington standards, and comfort food was definitely in order.

A couple of nights later was the party at our bungalow, which involved a caterer, a team of waiters, lots of cleaning and arranging and flower design, and a last-minute delivery of patio heaters. Our guests seemed happy, My husband’s business partner spoke beautifully about energy, politics and the global economy, and we have a fridge-full of delicious leftovers (curried sweet potato salad; chicken with chimichurri sauce; hearts of palm and tomatoes; a plateful of pastel-colored macaroons—tender little clouds of deliciousness).

Now I’m finally catching this moment to relax. There’s a breeze in the palm trees and sun on my bare feet. I’m reading this architecture book that’s already sent me into several late-night sketching frenzies. A Pattern Language—my cousin Jake put me onto it. More on that soon.

My front-row seat for the parade: 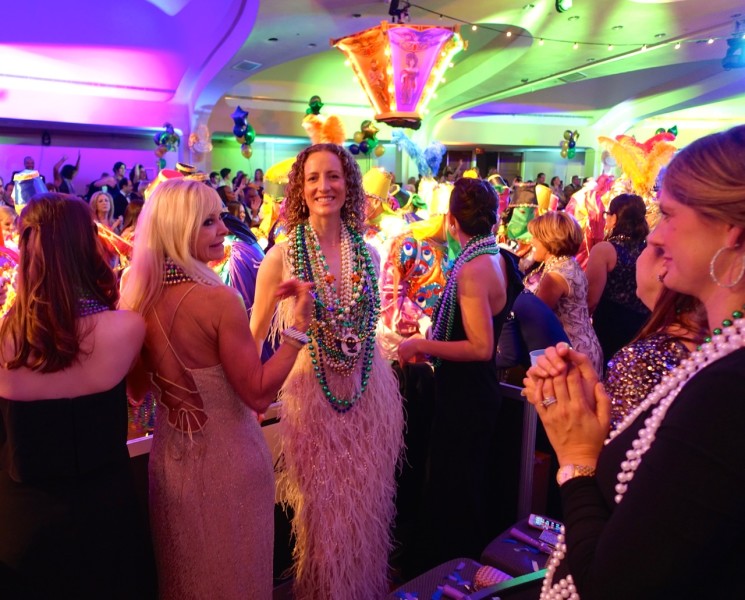 And the opposite end of the universe: 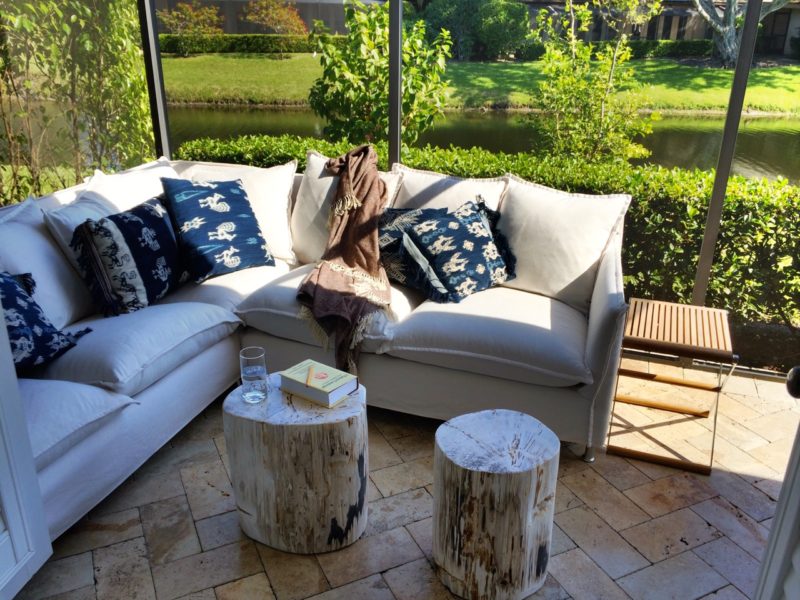 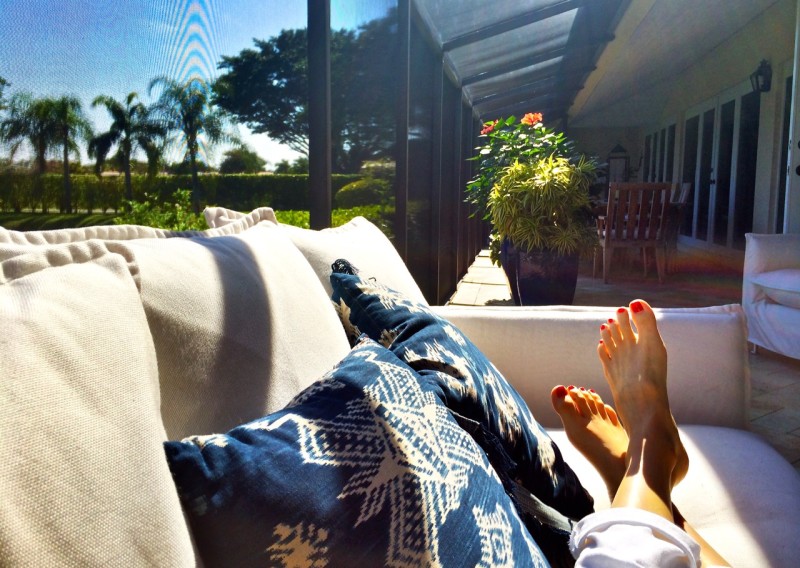