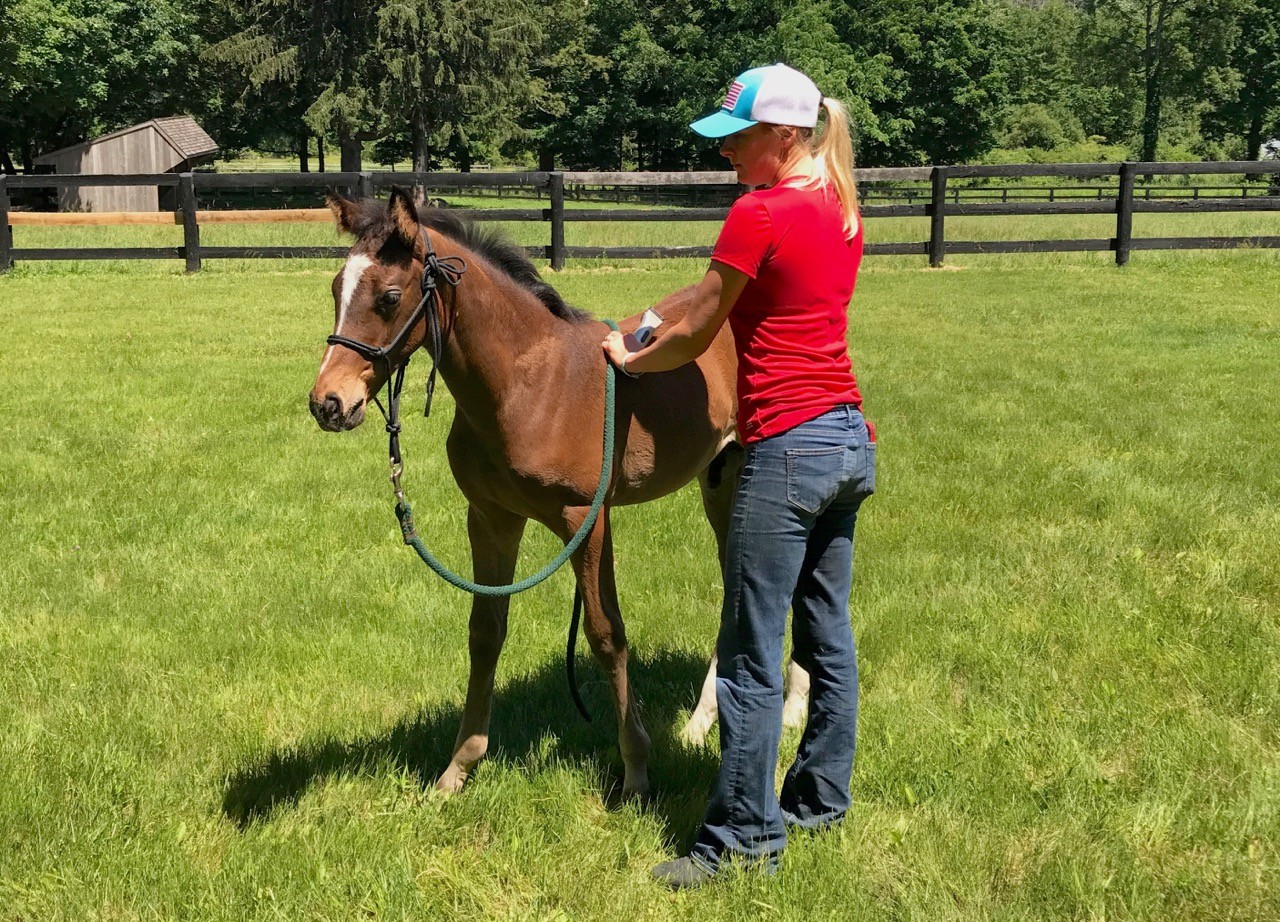 Our friend Sarah Dawson is a top trainer of western performance horses, based in Texas. A couple times a year, we steal her away for some help with our young jumpers. This time it was our three new foals in Connecticut—all colts, just two and three months old. Sarah’s system makes foals easier to handle as youngsters and easier to start when the time comes. She’s a super-experienced colt starter, and her method—like all effective horsemanship—is based on well-timed pressure and release. Here are her three core principles, for horses of all ages:

1. Make the right thing easy and the wrong thing difficult.
2. Reward the slightest try.
3. Be as gentle as possible and as forceful as necessary.

These are the same principles, incidentally, that make for good riding. (More about that another day.)

Every time you handle a foal, you’re training, for better or worse. Our boys got some excellent handling at Takoda Farm, where they were born, and our team has continued with the basics: get them used to being petted and brushed, rub their faces and ears, lead them alongside their mothers, pick up their hooves for a farrier’s trim. Which is not to say, though, that they’re 100% solid on leading and hoof-lifting. And they’re growing fast; they’re now too big and strong to be controlled by the bearhug-around-chest-and-hindquarters method, but too young to know all that much about manners.

They’ve got baby-stallion boldness and a tendency to see what they can get away with. (Eg., if I push you, will you step back? If I kick, will you drop my foot? If I pull back on this lead rope, will you give up?) With each other, they use rearing, striking, biting, chasing and kicking to play for dominance. And horses are prey animals, so the last thing they naturally want is to be contained or controlled, to let someone hold their leg, taking away their ability to run from a threat. Now’s a great time to build their trust and respect for humans. As Sarah puts it, they need to understand we’re their leaders, and their life will be easier if they follow our suggestions.

Example of the baby-stallion approach to life:

Over two days, Sarah made huge progress on leading and lifting hooves. And she worked on desensitizing the colts to the training stick and flag, the feel of a strap around their middle, and the sound and vibration of clippers.

We did two short sessions each day with the foals. (Their attention spans are short, and it’s important not to overwhelm them.) As a training area, we used a small paddock beside the mare and foal pasture. We brought in one mare and foal at a time. In this familiar setting with friends nearby, the foals felt comfortable but had enough distractions to challenge them, thereby creating the most training opportunities. We used the small paddock so if a foal got away, he’d be easier to catch. This happened only once; you can see how Sarah handles it near the beginning of the first video.

Day one, she worked mostly on lifting feet (which takes a lot of patience, as the foals try different means of escape; you have to hang on until they stand quiet) and teaching them to move their hindquarters, for better control and safety (see more about that in her demo video here, featuring a reiner colt of ours in Texas). Day two, she built on that foundation and added a few new elements, including clippers.

The western rope halters have more “feel” than leather ones, meaning the rope creates more effective pressure and more obvious release, for responsiveness and reward.

Here she is with Pavie, working on the stick and flag, rope around his barrel, lifting feet, and yielding to pressure from the halter and lead:

1. After Pavie gets loose and she catches him, Sarah doesn’t reduce the pressure or act tentative. She goes back confidently with the stick and flag and only releases pressure when he makes an effort in the right direction.
2. After a small victory, she gives him a break from the flag and works on something else; she knows how much to ask of him.
3. She uses a rope to lift his hind feet the first time; it’s safer if he kicks and easier to hold if he tries to walk away.
4. When he resists leading, she moves to the side and pulls diagonally to unlock his feet.
5. She pauses between things and rubs him when he’s made some good progress.
6. At the end, she makes sure she’s the one to walk away from him, rather than letting him decide when to leave.

“I have to be careful that I don’t take offense to any of the wrong answers that he tries. He’s just trying to figure it out.”

That afternoon, she worked with all three colts on desensitization to the clippers. Dominic had been the cheekiest on day one about lifting his feet; he tried rearing and kicking and stomping and then finally learned. And here he’s a total star with the clippers, trying only some minor hoof-lifting-related antics.

With the clippers running, Sarah starts by rubbing and petting the foal with the back of her hand, in a way he’s already used to:

1. There’s been a lot of buildup to this moment—two months of desensitization to being petted on his body, face and ears, plus Sarah’s first three training sessions building trust and respect.
2. To give him a fair chance, she introduces one new thing at a time: first the clipper noise, then the clipper feeling.
3. Rather than approaching tentatively, as if he might/should be scared, she confidently places her clippers hand on his back and rubs him in a bold, relaxed manner.
4. Note that she is not trying to actually clip him; she’s just getting him used to the sound and vibration. (This is also how to desensitize an older horse that’s afraid of clippers!)
5. When she lifts his foot and he tries to hobble away, she holds on until he stands quiet—then releases the foot.
6. She doesn’t actively try to stop him from moving around; she lets him realize on his own that when he stops, she’ll release his foot.

“It’s really no big deal that he’s trying to walk away, but I’m just going to try to keep this foot lifted up while he does it, so he doesn’t learn that when he struggles, I release.”

Elliot goes next, and is also excellent, clippers-wise:

1. She puts the heel of her hand between the clippers and his nose, so if he tosses his head, the hard edge of the clippers doesn’t bump him.
2. She keeps the clippers moving and doesn’t stay too long in one place, which might turn into an annoyance; as long as he’s being this amazingly good, she continually rewards him by moving on.
3. She keeps the lead rope draped over her arm or across his back so she can pick it up if she needs to.
4. She teaches him to drop his head from pressure on the poll. This is important for horses of all ages, since throwing their head in the air is a classic horsey means of attempted escape.
5. When she asks him to step back from pressure on his halter, she releases after he takes just one step; that moment of yielding is all she’s after.
6. When he pushes into her, she pushes him back and releases pressure only when he’s standing respectfully out of her space.

“I want to give him every chance I can to be confident about [the clippers] and realize it’s not that big of a deal.”

And finally back to Pavie, who tries an experiment in non-leading stubbornness:

1. When he resists or acts up, she is completely patient and methodical and never loses her temper.
2. When he’s not making progress with the first method, she tries something else (in this case, the stick and flag).
3. Once he makes a good improvement, she rewards him: let him stand and rest; rub his forehead.
4. She protects herself by keeping his head and hindquarters out of her space.
5. When he rears and leaps, she pulls him around to disengage his hindquarters. This hindquarters control is the first thing she taught him on day one.
6. To finish, she lets him stand and quiet his mind; the doing-nothing time is an important part of training.

“When you start something like that, you need to be careful that you finish it. It doesn’t mean that he has to be the loser and I’m the winner. He just needs to know that I’m his leader and he needs to respect me as a leader, whether it’s going over a fence or something as simple as being led through the pasture.”

“We run into more trouble when we try to control that forward energy. If they want to move, it’s best just to let them move.”

“You need to realize when it’s time to quit. We got a small win right there. He didn’t make it as far as those other ones did, but they’re all individuals. And so pick it up again tomorrow and see if we can get a little further with him.” 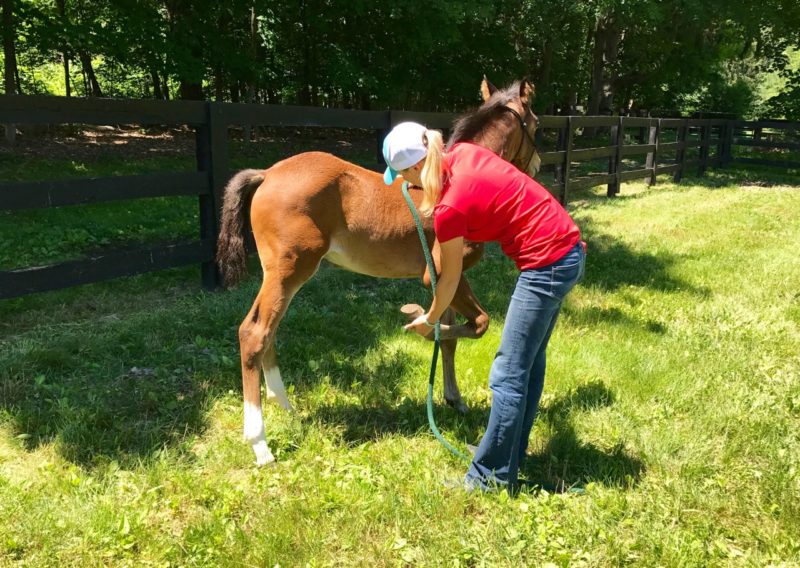 Preparing for the idea of a girth: 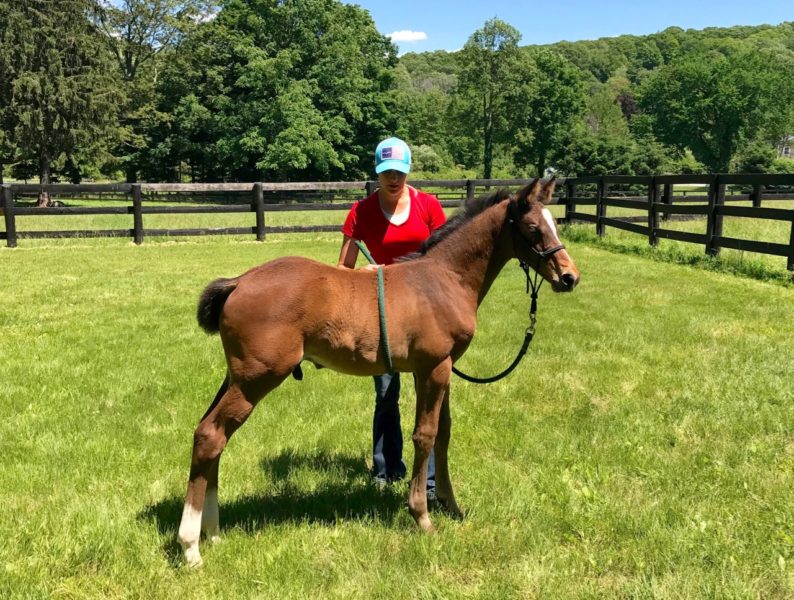 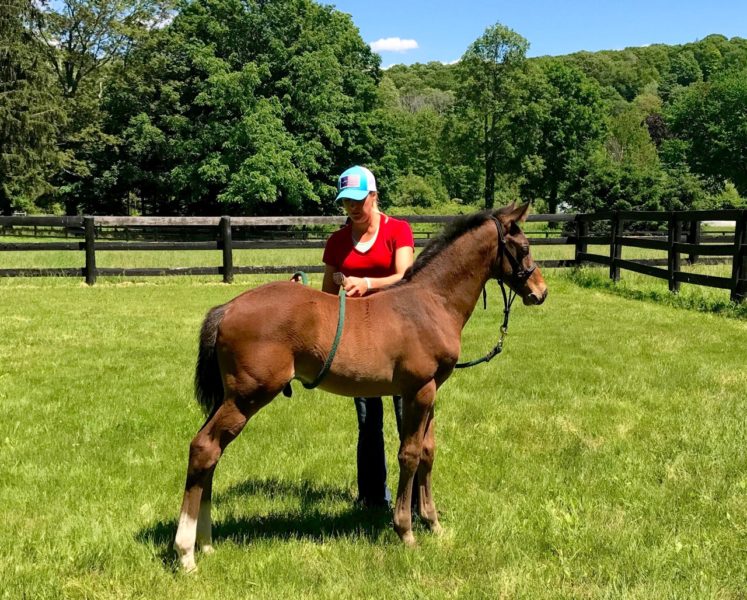 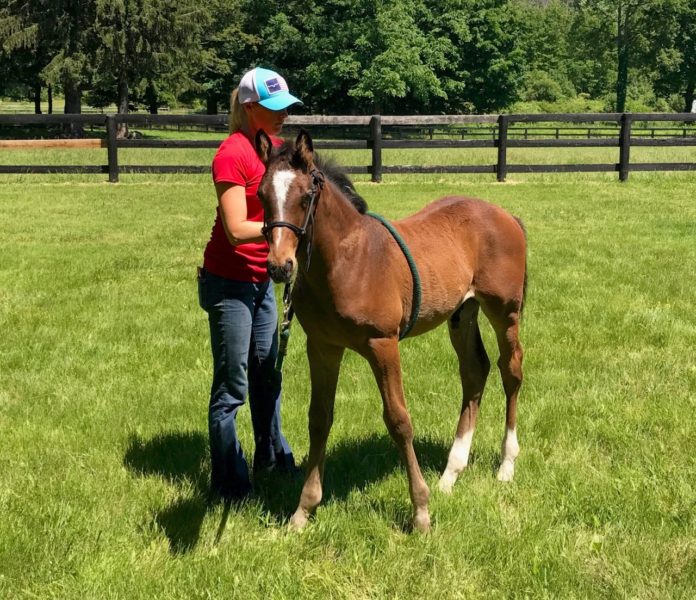 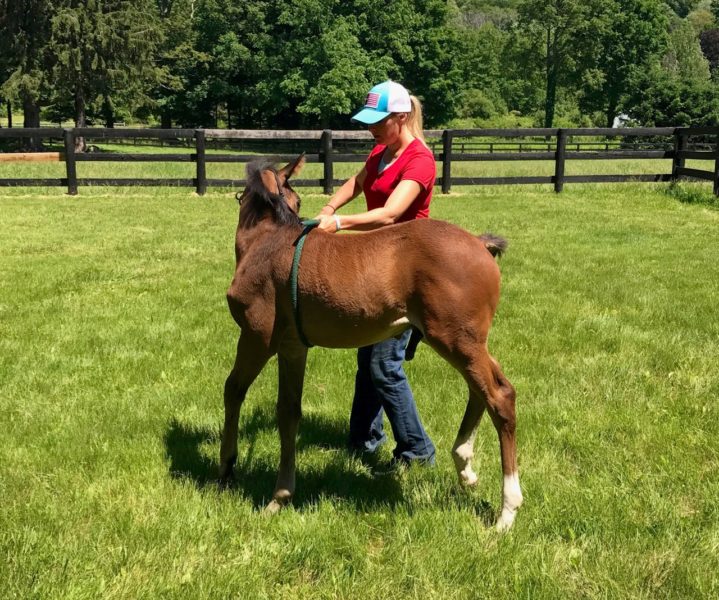 A cool maneuver to teach them to yield from pressure and follow the lead: 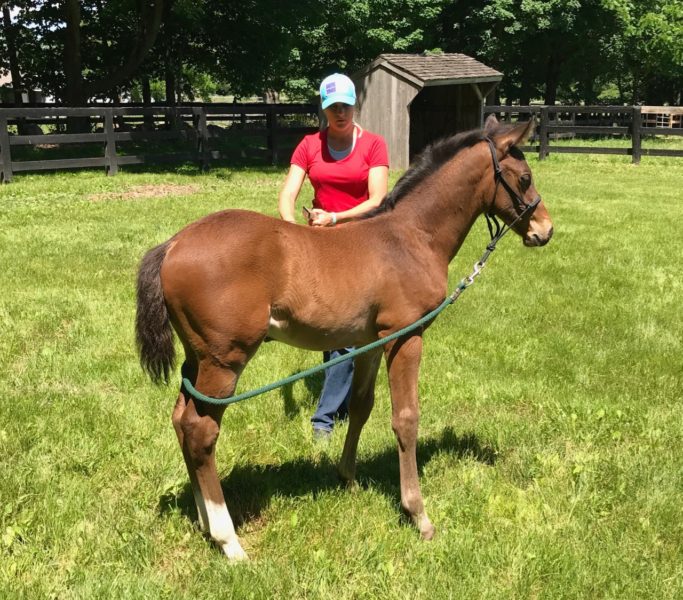 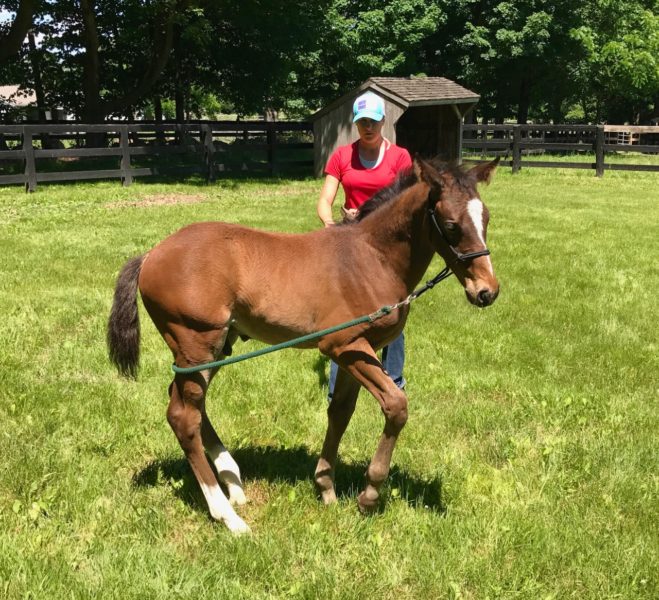 See all these things in motion:

What’s in store for these boys one day—here’s Feinest in the round pen: 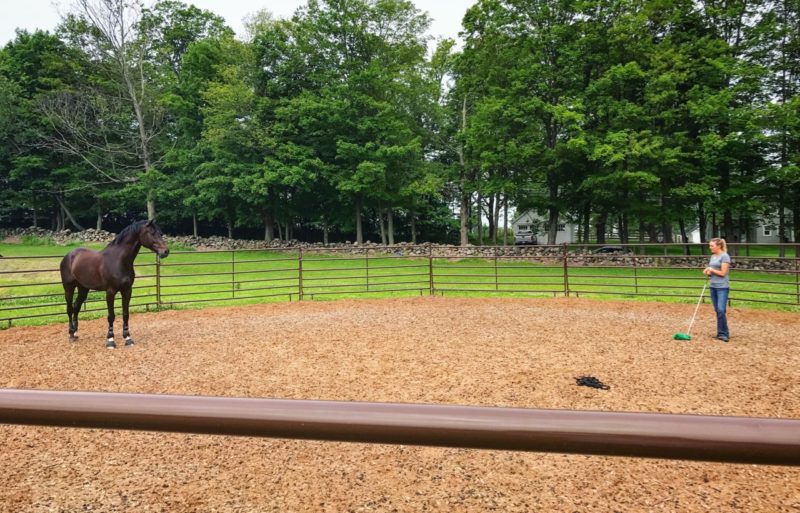 The old horses came over to watch: 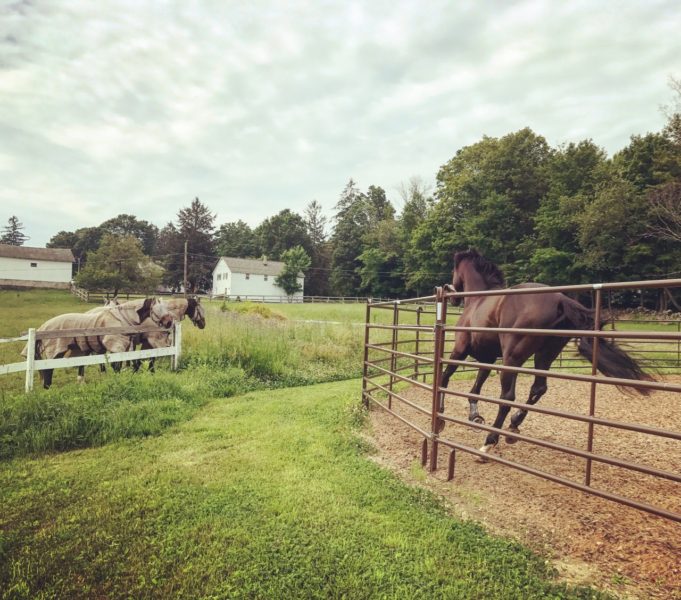 A glimpse of the round pen work:

Read about her last visit to our Florida farm here.

And check out her colt starting series on Tom McCutcheon’s Virtual Horse Help.

Sarah and her husband, Chris Dawson, operate Dawson Performance Horses from their ranch in Perrin, Texas. She is a leading professional trainer of working cow horses, a competitive western discipline that includes reining, cutting, and high-speed fence work. She is also a well-known colt starter and competed in Road To The Horse. (Her father, Richard Winters, was the 2009 champion.) For fun, she rides in three-day eventing. 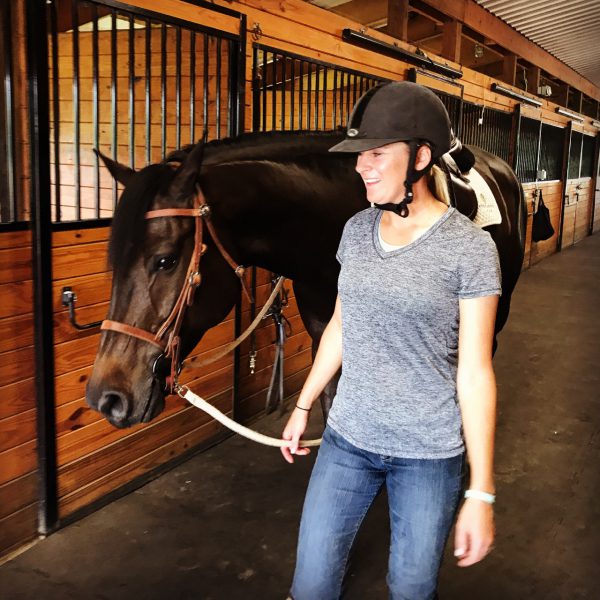 Sarah with Feinest (in a western snaffle bridle!)

Meanwhile, the weenie dog has work to do around th