How To Play Poison-Style Croquet 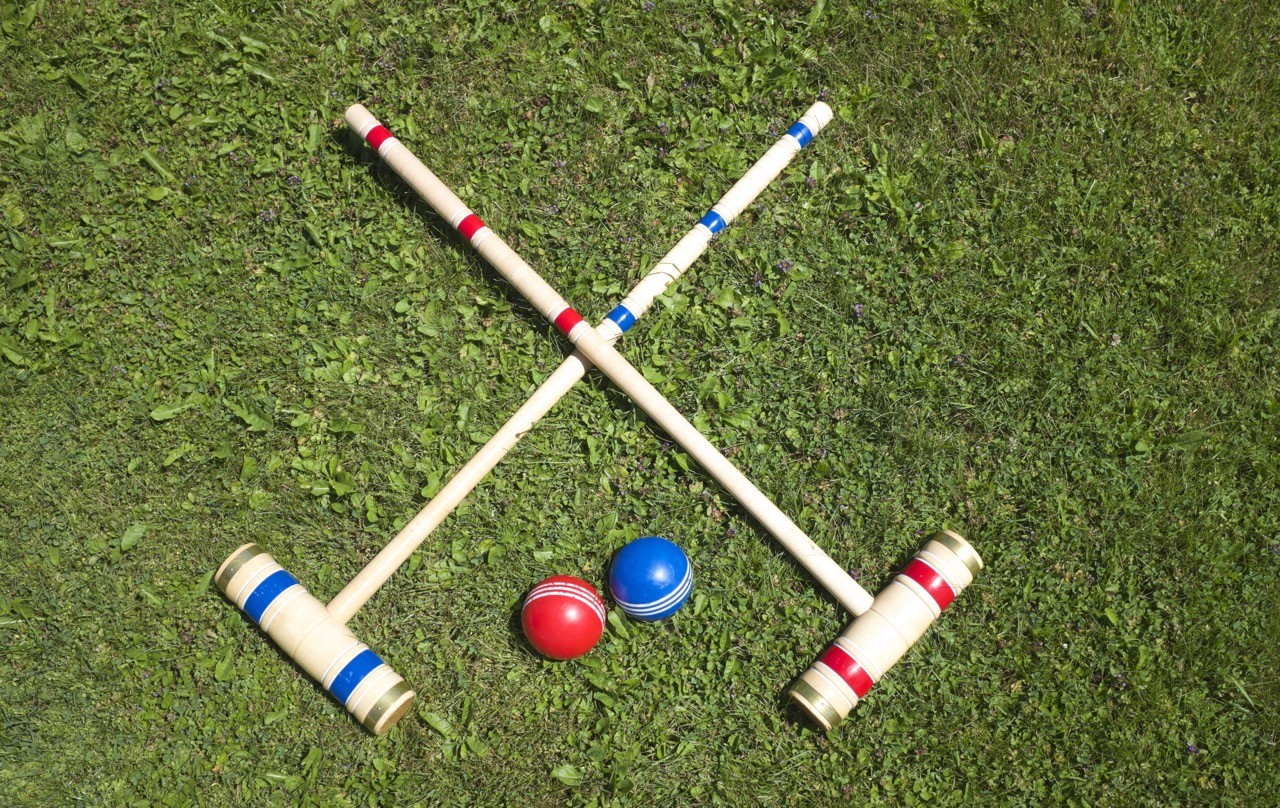 It’s my family’s go-to summer weekend game. Skip the whites, bring out the barbecue and cocktails, and stake your course on whatever flattish ground you have. A little hill just adds an element of challenge.

We play by Bridgewater Mountain rules, from John’s (that is, my stepfather’s) childhood. Once you complete the course, you become poison and go chasing your opponents. Last survivor wins. It’s all about strategy and looking several moves ahead. You won’t find us blasting each other a mile off course; much better to use your opponent’s ball to advance your own play. 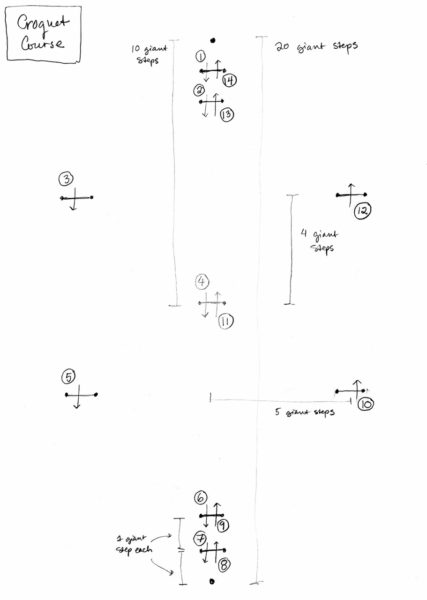 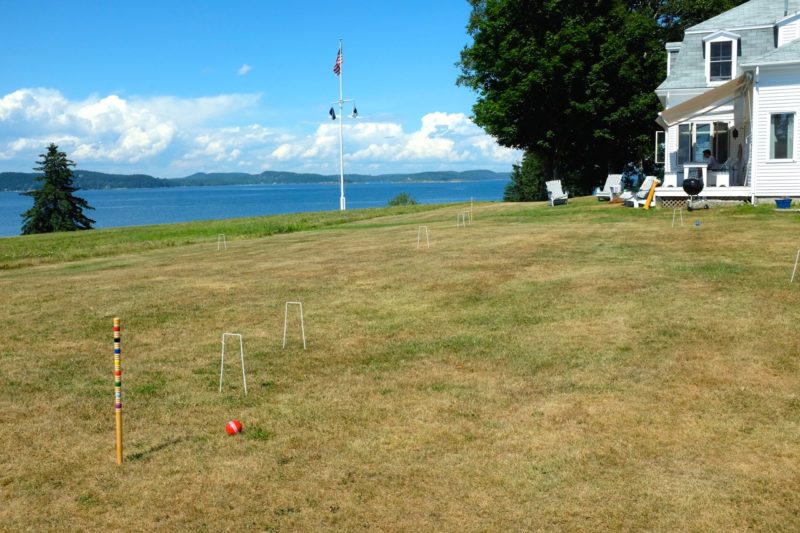 1. First, determine the order of play by shooting for the middle wicket.

2. To start, position your ball as close as you want to the first wicket. (See photo below, eg.) Proceed through the wickets in the order marked above. 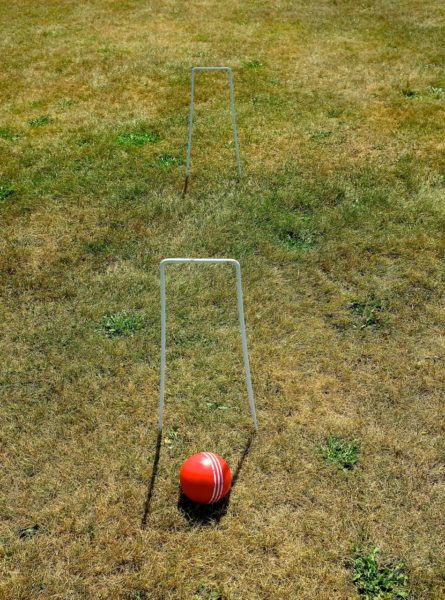 3. You have one shot per turn. But there are ways to get extra shots.

4. Once you complete the course, you’re poison. (Remember, don’t hit the stake! Go through the last wicket; then you have one more shot to start the chase.)

How To Use Those Extra Shots

1. Once you hit an opponent’s ball, play stops. (In other words, whatever your ball does after striking the other ball doesn’t count, including going through a wicket.) Pick up your ball and place it a mallet’s head away from the ball you hit, in any direction. (Photo below.) Make sure to leave yourself room for your backswing, plus a clear shot in the direction you’re headed. 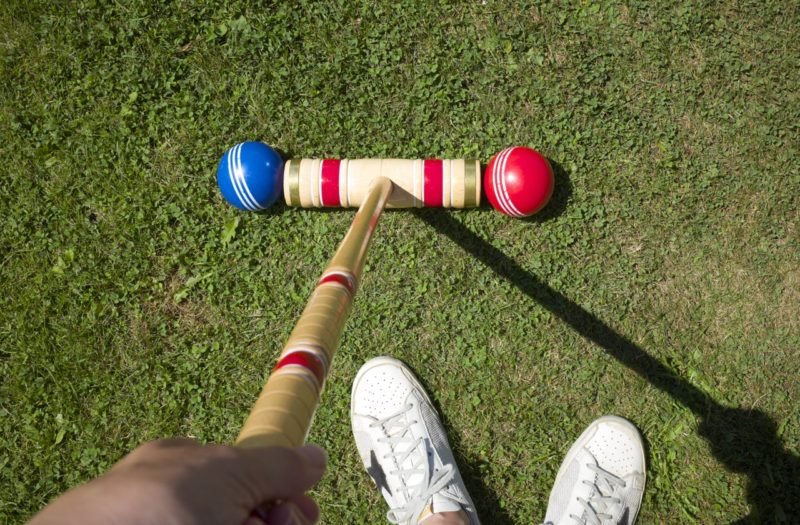 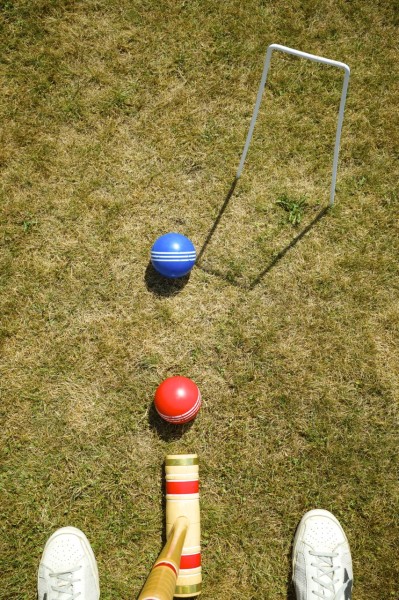 3. Another option is to place your ball directly touching the ball you hit. From there you have two possibilities: hit your ball normally so that the two balls angle away from each other (or, in rare cases, travel forward together, like through a wicket); or hold your ball in place with your foot, then strike it side-arm to send the other ball away.

Example 1: hit gently to send the blue ball past the wicket and set up the red ball; use your second shot to go through the wicket (another gentle shot). On the other side, you can play off the blue ball again: 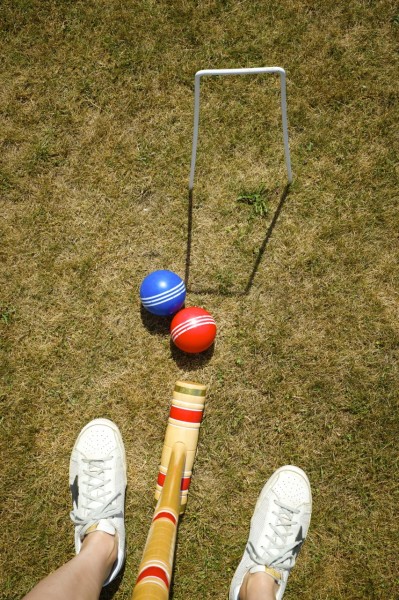 Example 2: If your current location gives you a good shot on the wicket, hold the red ball stationary and send the blue ball to the other side; use your second shot to go through the wicket, then play off the blue ball again: 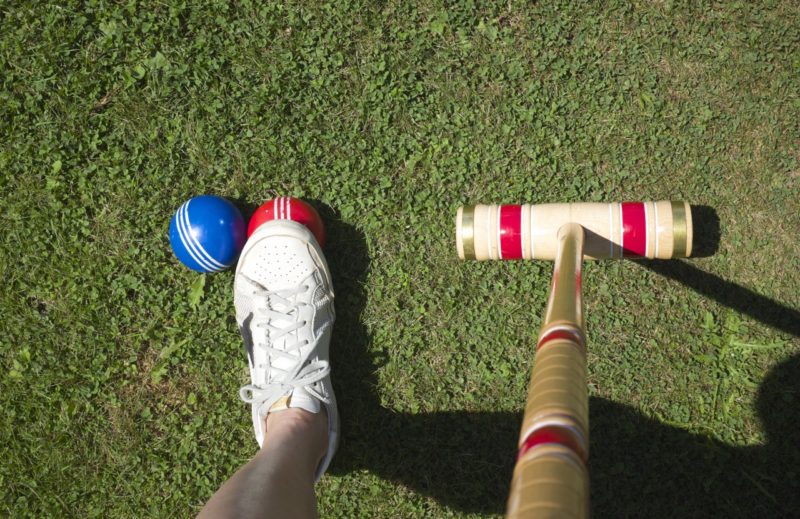 1. When your ball lands under the wicket, that’s called getting bridged. If you’re bridged, you lose a turn. However, if someone else knocks you out of the way before your turn comes up, you’re no longer bridged and you play as usual. (To test whether you’re bridged, run the mallet down the wicket; if you can do so without touching the ball, you’re not bridged.) 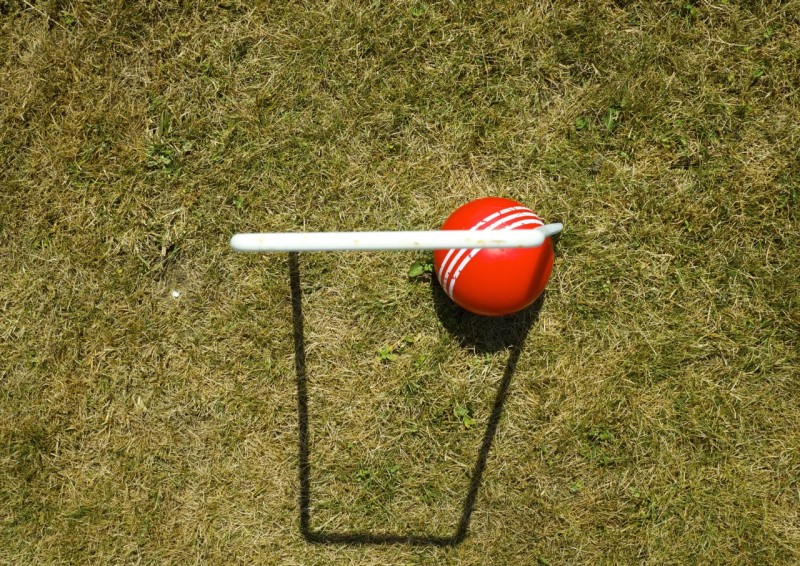 2. If you take your turn out of order, you miss your next turn.

4. The course consists of all adjacent playable ground. If your ball lands outside the course (eg., in long grass or in the garden or under the deck), place your ball back inside the course a mallet’s length away from where it exited, straight in from the edge. That’s a mallet’s length, as in the length of the entire handle. Keep this in mind if you’re poison and aiming for another poison ball near the edge of the course; if you miss, you’ll have to come back in very close to the other poison ball, giving your opponent an easy shot on you.

1. Side-arm shots (á la golf swing) don’t usually give the best aim. Use them only for that foot-on-the ball shot. In general, go for the centered-between-the-feet, knees-bent stance.

2. If there are several balls ranged around the course, one player can advance a long way in a single turn. Playing off of others to gain extra shots is the way to take over the course. Keep this in mind if you’re close to the end but not yet poison. You want to set yourself up for those last wickets, but if someone (whose name might or might not be John) is lurking a couple of wickets back, and there are other balls he can play off of along the way, he could become poison in one turn and take you out. Just saying…

3. When you’re poison, and you hit another ball, you don’t necessarily have to kill that one. You can use your two shots to go after a different ball—one that’s closer to the stake, or that you consider more of a threat, like, eg., John. Then you get two more shots to hit the stake, and only the ball you last hit is out.

Here we are in Maine, playing at cocktail hour: 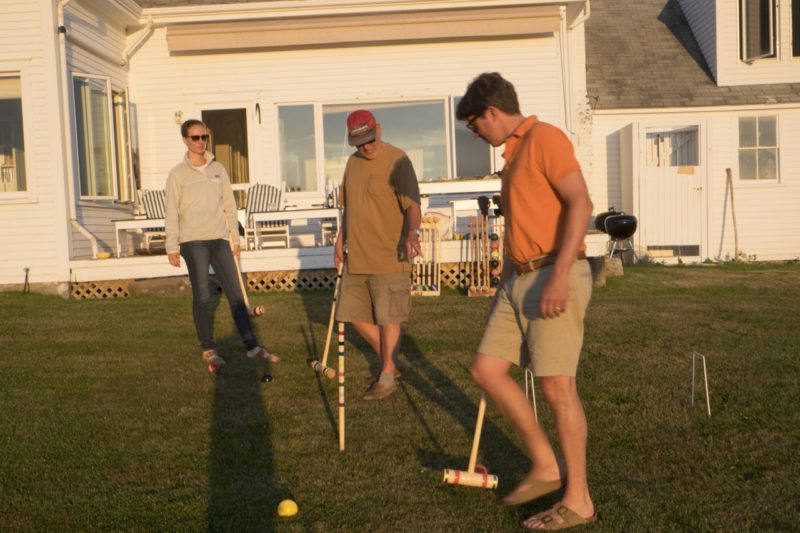