In Memory of Grappa 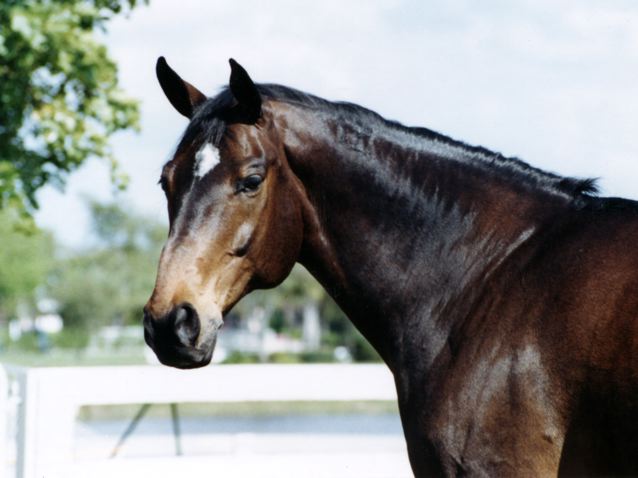 He was the greatest. No other horse has matched his record of seven national equitation championships. He set the standard of what an equitation horse could be. Over the years people have searched for the next Grappa, but there will never be a next Grappa. There was only one.

He had a beauty and class all his own. He was dappled bay with a crested neck and shining eye, nicknamed “The Moose,” for his handsome and strikingly moose-like profile. He had a powerful body, lightness of stride, and sense of confidence, presence, and wildness that let him soar over open water jumps with effortless grace or buck off his rider on a whim. When he stepped into the ring, he stole the show. There have been many wonderful equitation horses, but I’ve never seen another with Grappa’s brilliance. That light in his eye, that bright gallop, that smooth, stylish jump—he was full of life and ready to tackle any human-devised challenge.

He was also one of my oldest friends. Grappa was with me twenty-three years, until he died September 28th, 2020, at age thirty-four. In recent years living at my Connecticut farm, it was pure pleasure to look out the window and see him grazing with his longtime buddy, Otter; to lead him in from the field and brush him; to take a walk before sunset and visit him, scratching his withers while he nickered under his breath. His extraordinary life force stayed with him. He’d roll and heave himself up, then take off bucking across the pasture.

Grappa came into my life in 1997, just before the Maclay Finals that year. I was a kid with big dreams, who’d grown up foxhunting and riding naughty ponies, then found myself progressing through the show world to arrive at Missy Clark’s barn. In January of that year, we were walking our first course together, and she discovered I was young enough to still be eligible for the 12-14 equitation. “Yippee skippee!” she said. “We’re gonna win the finals.” But the horse I brought with me wouldn’t do. Soon she’d lined up my partnership with Grappa, thereby setting in motion some of the most formative experiences of my life. 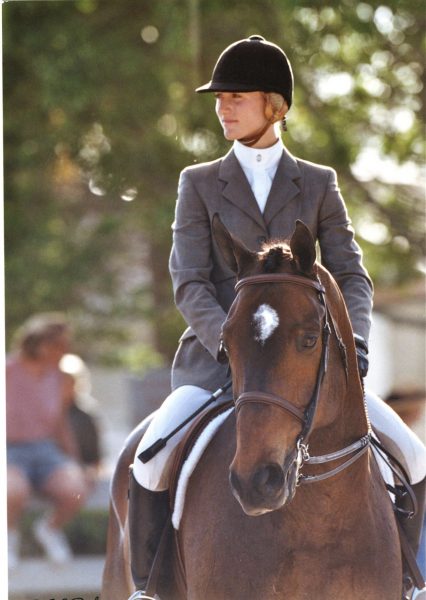 Together Grappa and I won the Washington Equitation Classic Finals, USET Talent Search Finals, AHSA Medal Finals, Calvin Klein Equitation Classic, Kathy Scholl Equitation Classic, New England Equitation Finals, Maclay Regionals, and in our final year showing together, every Medal, Maclay and USET class we entered. He also bucked me off twice. The first time, I was trying a new saddle (unoiled, never ridden in), and he started to buck and play at the end of a course. “Eight seconds!” Missy joked, both of us laughing. Then suddenly I realized I had nothing to hang onto. The second time was during a midnight schooling session in the Harrisburg arena, preparing for Medal Finals. We’d been in the four-rider horse swap at the USET finals the weekend before, meaning he’d done a lot of jumping, plus we’d been training all week at Harrisburg, so any normal horse would have been quiet by then. I jumped into an outside line for the second time and he felt so good, so relaxed—I just softened my hand ever so slightly, giving him a tiny bit of rein—and he launched me across the arena.

Grappa taught me horsemanship lessons that will serve me for a lifetime. From Grappa, I learned that the great ones are often quirky; that instead of trying to train those quirks out of them, you work with them, try to come to an understanding. You let the horse have some fun, make some mistakes, express himself. Save the scrutinizing of each moment for the show ring. The everyday stuff has room for individuality.

One of Grappa’s particular quirks was a signature stance we called “communicating with the mothership.” He’d stand with ears pricked, head high, eyes gleaming with riveted attention at something far away, usually unidentifiable to us mere mortals. We’d let him have his moment; it seemed important to him. And then eventually we’d ask him to come back to earth. In his elderly years, I was happy to see him this way—a sign he was thriving, still himself. But in his show days, it didn’t exactly bode well. Antics of some kind would likely follow. 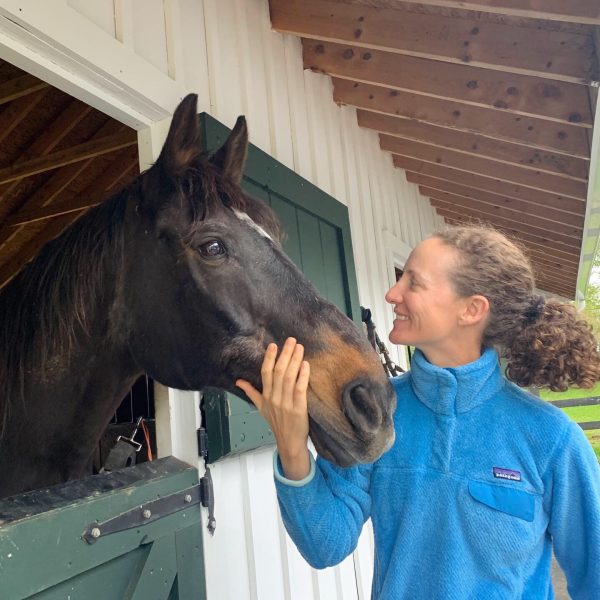 He had an unparalleled ability to keep you on your toes. In other words, he required total presence in the moment. There was no room for drifting attention; on his back, I was connected with him and attentive to him always. He’d spook at unpredictable times—just to express his wildness, it seemed, not because he was actually afraid. That horse had no fear. He never questioned a fence, be it skinny wall or grob or multi-level bank. He was the best water jumper I ever rode (and I was lucky enough to ride some great Grand Prix horses). It was all so easy for him; his job was like play.

He taught me the art of preparing a spirited horse to show. It took diligence to get him quiet enough, whether that meant saddling up early for a lesson, leaving time for a good warmup and a few laps at the hand-gallop before anyone else even walked through the gate; or those extra rides before showtime, cantering in the half-seat to keep his body comfortable, or just walking around the grounds, letting his mind stay busy. His soundness was always our priority. He had beautiful conformation and was naturally healthy and strong, but we were mindful of how we took the edge off his bottomless energy. We wanted him still to feel good, just more ready to focus.

He taught me smooth, bold riding; he required it. He wasn’t the giant-strided, slow-moving type you often see in equitation. You had to ride forward, set your pace, no waffling. And he needed finesse. When he got down to business, he was exquisitely light in your hand and attuned to every signal from your body. With a horse like that, you’d better be balanced and soft, with independent, following hands that communicate, connect, and never interfere. 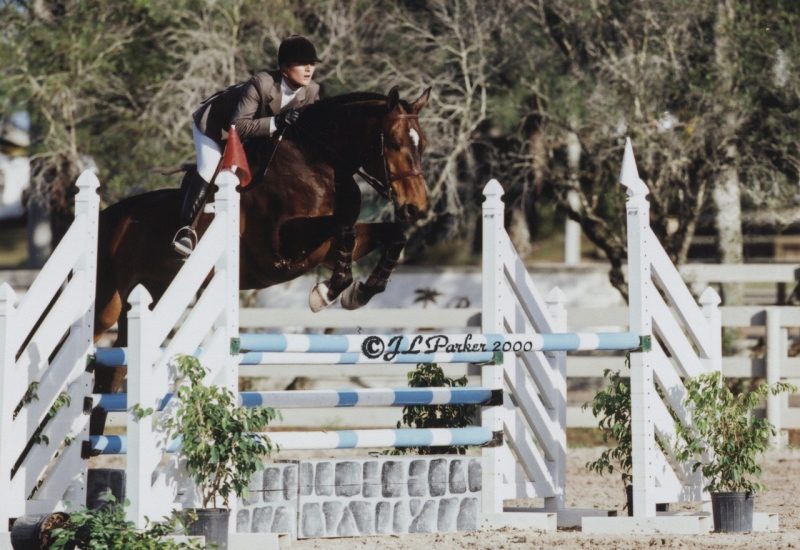 If you lacked that finesse, he’d tell you. He often surprised riders on horse swaps in the final tests of equitation championships. Once, a rider landed too heavily on his back, and he threw his head in the air, nose above his ears, and shook his head for three strides. With another rider, he cross-cantered around an entire turn, something I never saw him do before or since. Sometimes in group lessons, Missy would ask more experienced riders to demonstrate certain mistakes to the younger students. One day she wanted to make a point about the evils of ducking (in other words, throwing your torso down at the horse’s neck, rather than maintaining body control and letting the horse jump up to you). She told me the course and then asked me to duck over all three elements of the triple combination at the end. I did my best impression, and Grappa knocked down A, B, and C of the triple and took off at a gallop.

Over the course of twenty-three years, I learned to carry the responsibility and privilege of caring for such an extraordinary being. I’d have done anything to give him a good life, and thankfully, I was able to. After my junior years, we leased him to other riders under particular terms. He had to stay in our care and under Missy’s training. And he won the finals two more times. In retirement, he had two of the best horsemen I know looking after him: Brian Robinson, and later, Nancy Shaw.

Just before Grappa retired at age twenty, I showed him in the Amateur Owner hunters, for fun. One day I was hand-walking him at the Vermont show grounds and stopped to say hello to the horse show vet. “Wow, is that a breeding stallion?” he asked me. Grappa stood gazing into the sky, neck arched, eyes bright, covered in those golden-walnut dapples. “No,” I said. “He’s my 19-year-old gelding.” 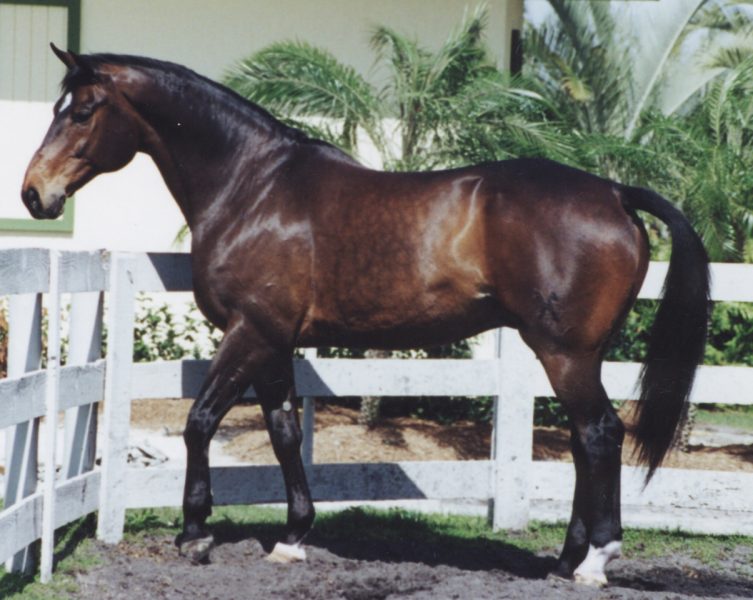 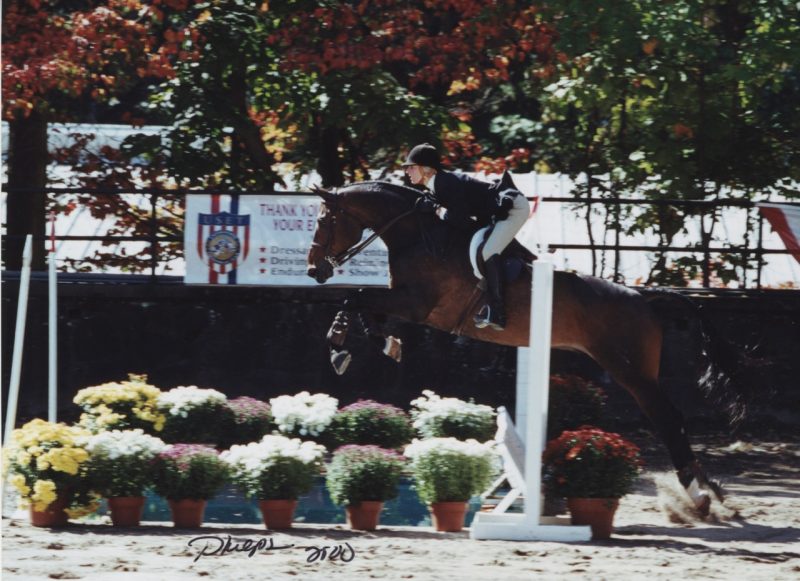 I never lost my sense of awe of him. Every time I swung a leg over Grappa’s back, I felt how incredibly lucky I was. Every day, I did my best to deserve him. In his retirement ceremony at the Washington International Horse Show, I rode him into the ring in the spotlight to Louis Armstrong’s “You’re The Top,” a song that could have been written just for Grappa.

There are so many things I miss about him. I miss our daily visits, our long friendship, how well we knew each other. I miss the little scarred indentation in his upper lip, and the way he’d lick my hands (for reasons inexplicable to me) with the bottom of his tongue. I miss the thing we did where he’d rub his forehead on me with all his strength—on my back, or my hands—while I laughed and tried not to get knocked over. I miss the blissful look he’d get when I scratched his withers, and how, when I stopped, he’d whirl around, nickering wildly, and push his other shoulder at me until I scratched him some more. And I miss walking into the show ring, feeling his body lift underneath me, his mouth light on the reins, picking up that lively, smooth canter and sighting in on the first fence.

What Grappa did for me in my riding career is forever part of me. And even more than the achievements, the chance to be his person, to learn from him, to love and care for him over many years, has helped to shape who I am. Whenever I’m with any horse, Grappa is in my heart. 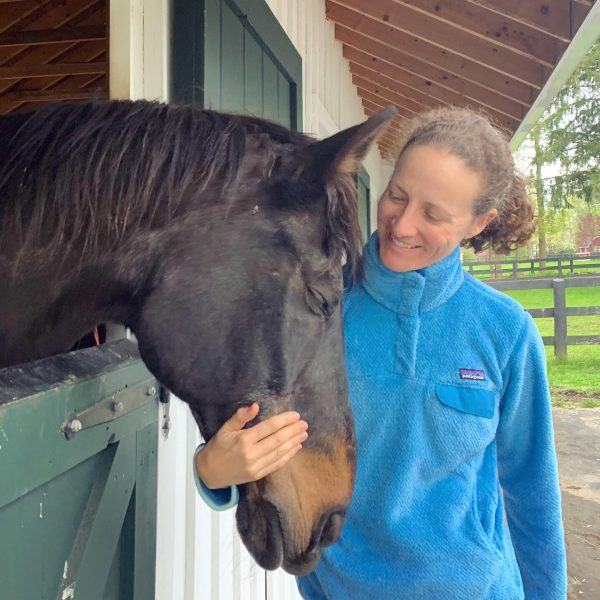 (This article first ran in The Plaid Horse December 2020 issue.)