Mandy and “Winnie” Win the Derby 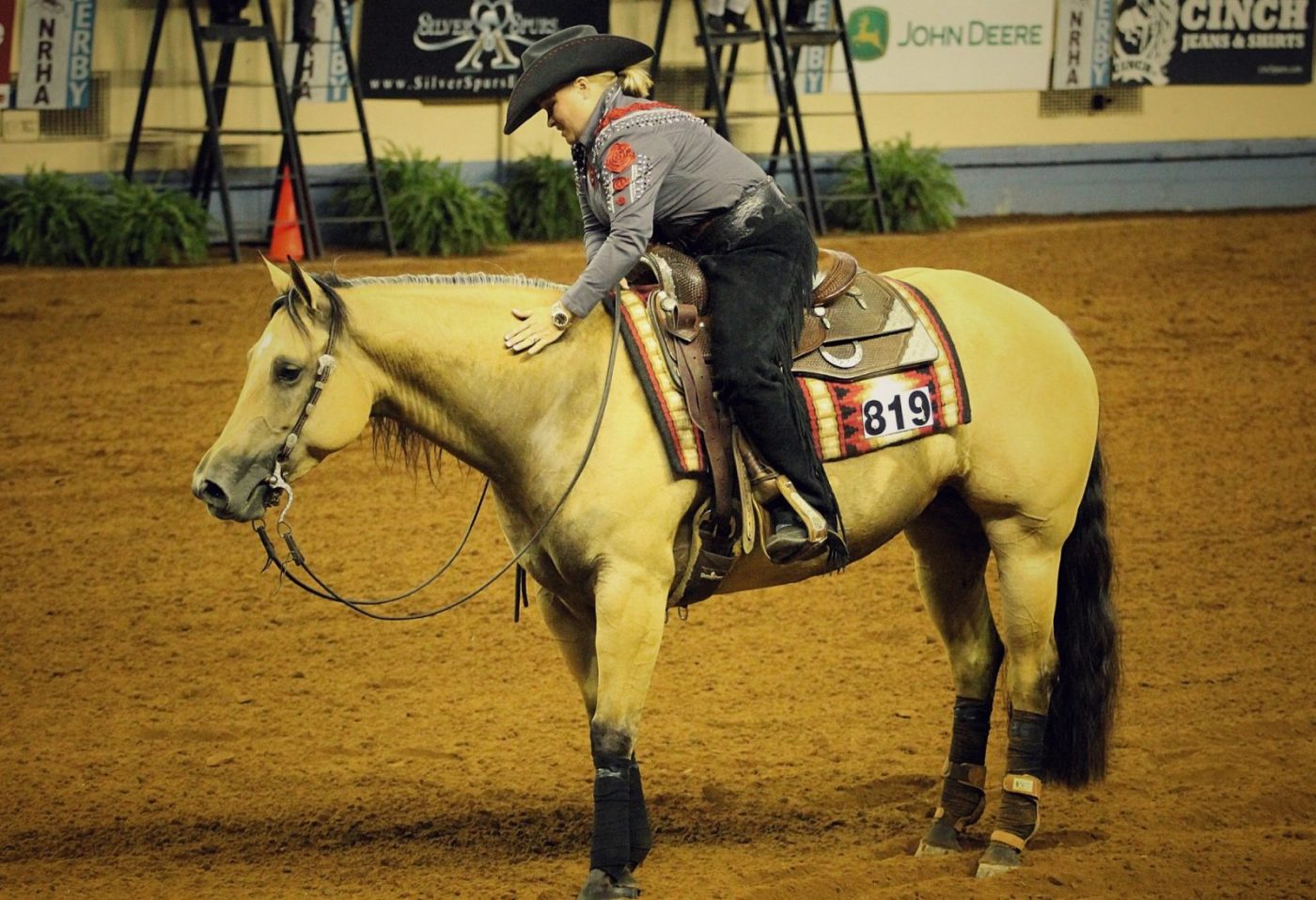 The National Reining Horse Association Derby is one of the highlights of the year, and our dear friend Mandy McCutcheon just won it—on a horse we bred! Hollywood Starburst, a.k.a. “Winnie,” is sired by the late, great Hollywood Dun It and out of our super-talented mare Chic Olena Starbuck. In addition to Mandy’s general awesomeness and the fun of being part of this moment, there are a whole bunch of reasons why the win is especially exciting:

1. Winnie’s dam is our main broodmare and has several other promising offspring. 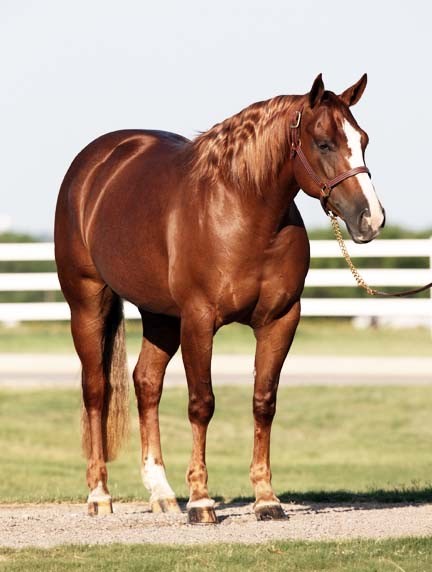 2. Winnie’s full sister, Belle Starr Dun It, is our next up-and-coming broodmare. (Belle is the first reining horse we ever bred and, as luck would have it, is about as gorgeous as a horse can be: creamy coat and black points, refined head, mane to her knees—just like her daddy.) 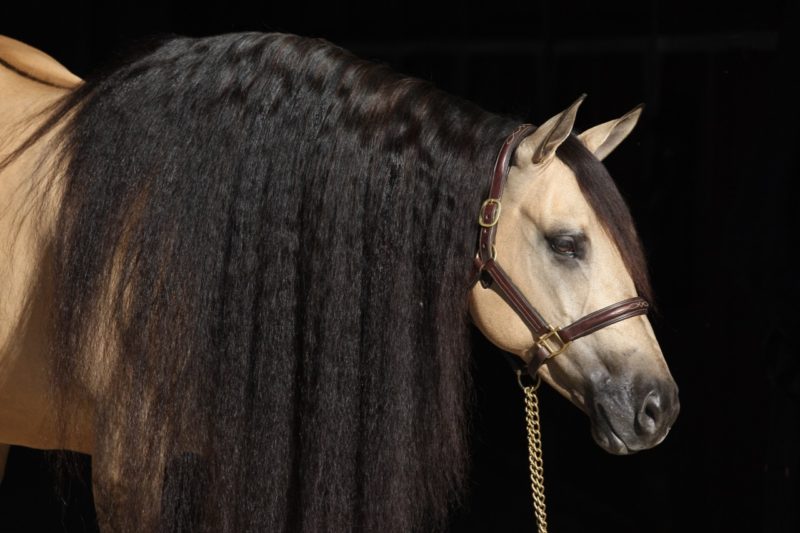 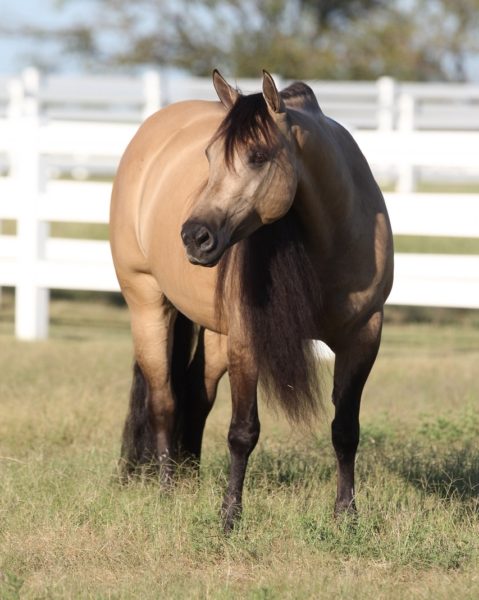 3. This win will be listed on the pedigree cards of the dam and full sister forevermore, meaning, i.e., that when we offer their offspring for sale, the close relation to a Derby Champion will be printed right there in bold capital letters.

4. Hollywood Dun It belonged to Mandy’s parents, Tim and Colleen McQuay. He was part of the family, and they helped him become one of the great foundation sires of the sport. His offspring have won over six million dollars, and his daughters are the all-time best-producing broodmares in the industry. He died in 2005. Read more about him here. 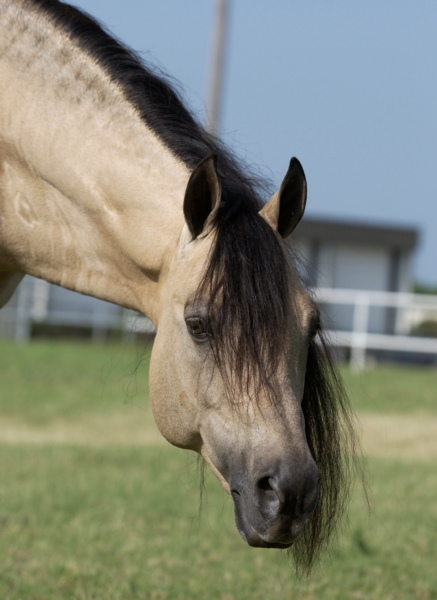 5. “Dun It” was the sire of my first reining horse, Dundee. I fell in love with his smooth lope, soft feel, and fabulous dun-horse looks. The fun I had with Dundee is really what got this whole breeding operation started. Of course, when I bought my first broodmare, Dun It was the sire I wanted to breed to. 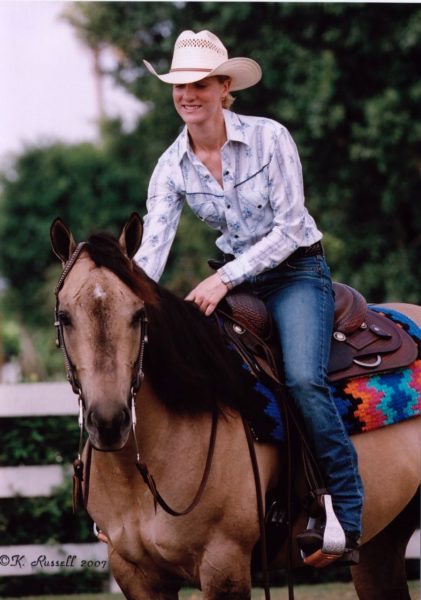 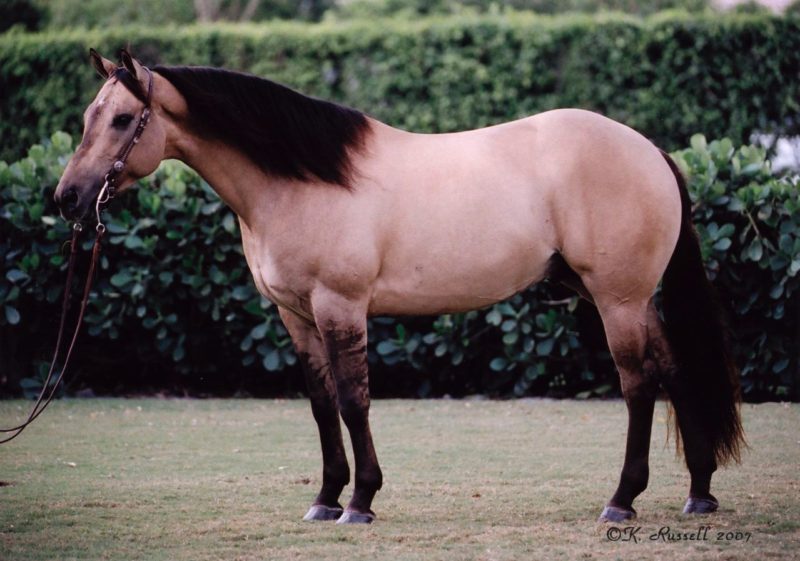 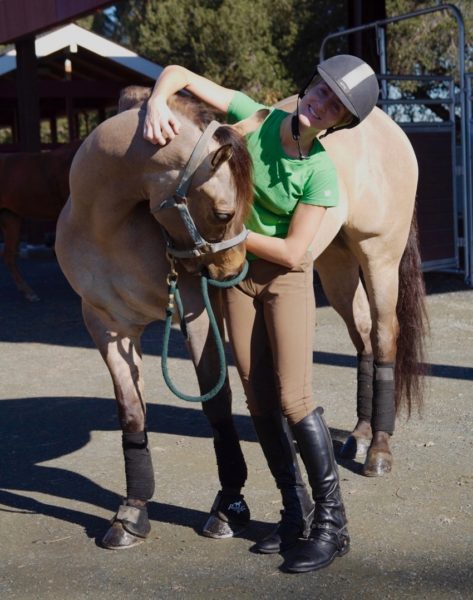 With Dundee at Stanford

6. We bought that first broodmare, Chic Olena Starbuck (a.k.a. “Latte”), from Mandy’s brother-in-law, Jim (so, brother of Tom McCutcheon, Mandy’s husband / our trainer). She was three years old and still green, but the word was she could do some mile-long slides. I first saw her tied to the arena fence. She’s sorrel with a blaze and wavy, flaxen mane, and I could see by her posture she was intent on not letting her nose touch the fence. A beautiful, sensitive, athletic mare: I was immediately obsessed with her. 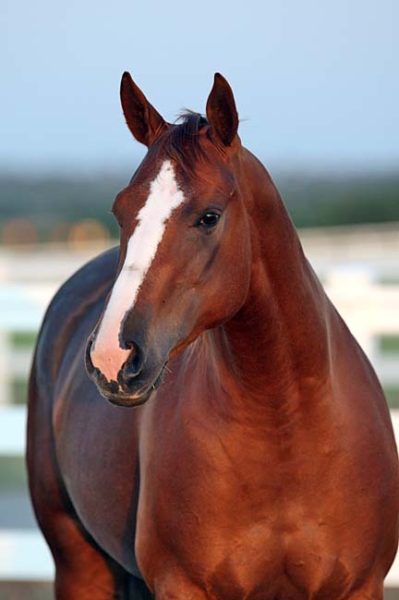 7. When Tom started training Latte, he sent me a photo one day of her ultra-long slide tracks (and, apparently, he showed them off to everyone in the arena). Tom is not usually a showy guy; this had to be something. And Latte did become known for her spectacular sliding stops, eventually winning over $75,000 in prize money. Winnie takes after her mama. 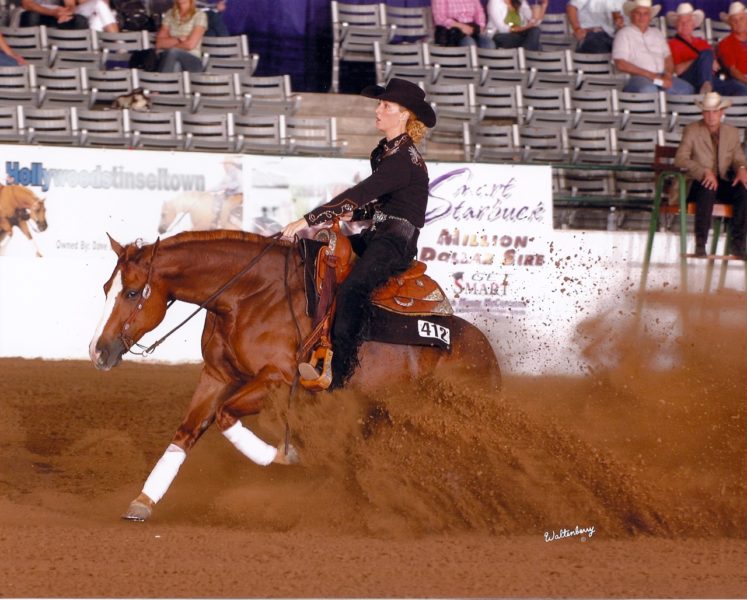 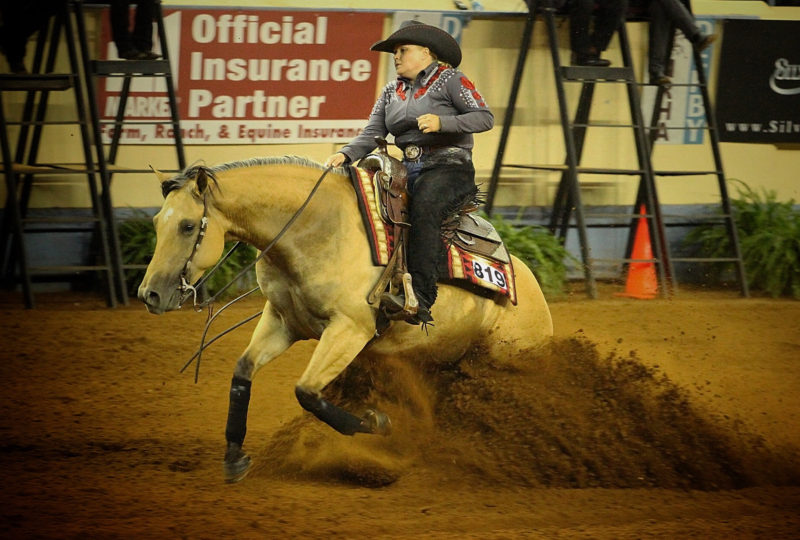 8. It seems the ever-wise Tim McQuay was right; when people kept asking to buy Belle, Tim said, “There’s not many that look like her and can do what she can do. She’s worth more to keep, and sell her offspring.” (Anyway, I didn’t need convincing to hold onto her!)

With Belle Starr Dun It in 2012 (photo: Primo Morales)

9. Naturally, Belle, in her gorgeousness, is a poster girl on our Turnabout Farm website.

10. Belle’s oldest foal is a three-year old colt, set to show in the futurities this year. Here he is with Tom:

11. Winnie has her first foals on the ground this year (via embryo transfer), and one of them is by our stallion, Gunners Special Nite. 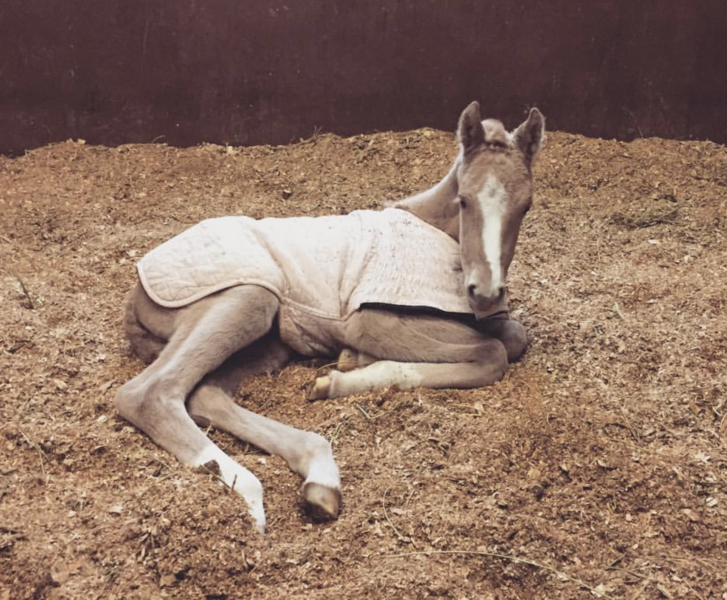 2017 filly by Gunners Special Nite out of Hollywood Starburst

12. Mandy is the only woman to have won $1 Million in reining—and in fact, she’s won over $2 Million. Let’s hear it for the girls! 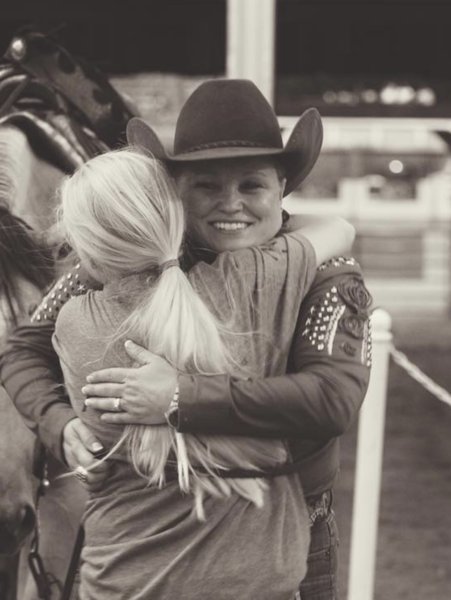 Mandy with her daughter, Carlee, after the winning run (photo: McKinnon Larcombe)

13. The win was decisive, one of those rare performances wherein everything falls into place—smooth, precise, dramatic. There’s been overwhelming goodwill and happiness, enhanced by the family-story aspect regarding Hollywood Dun It. And of course there were quite a few friends on hand to pose with Mandy for the win picture. 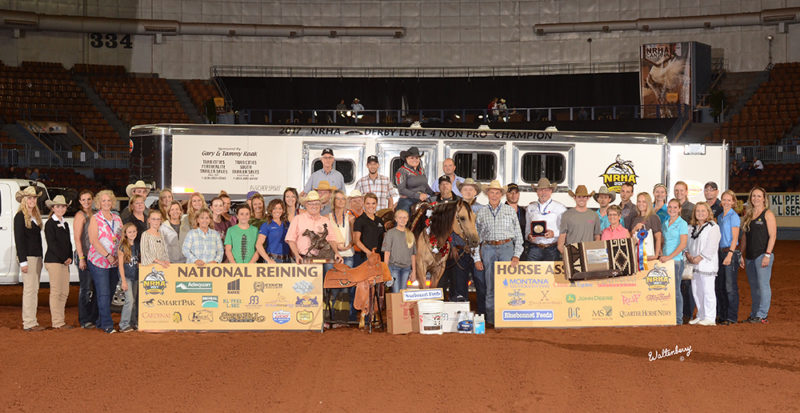 14. The video is just so fun to watch, capped off by Mandy’s beaming smile at the end. Check out those crazy-awesome slides:

15. With her talent, looks, and old-school bloodlines, Winnie captured a lot of people’s hearts. And most of her fans remember her fabulous mama. It’s an incredibly cool feeling that my beloved Latte has produced such a daughter. 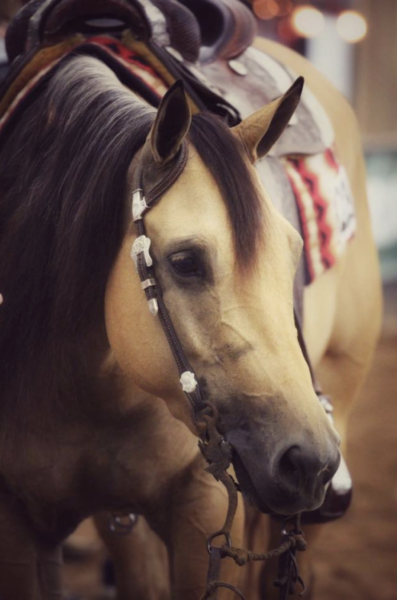