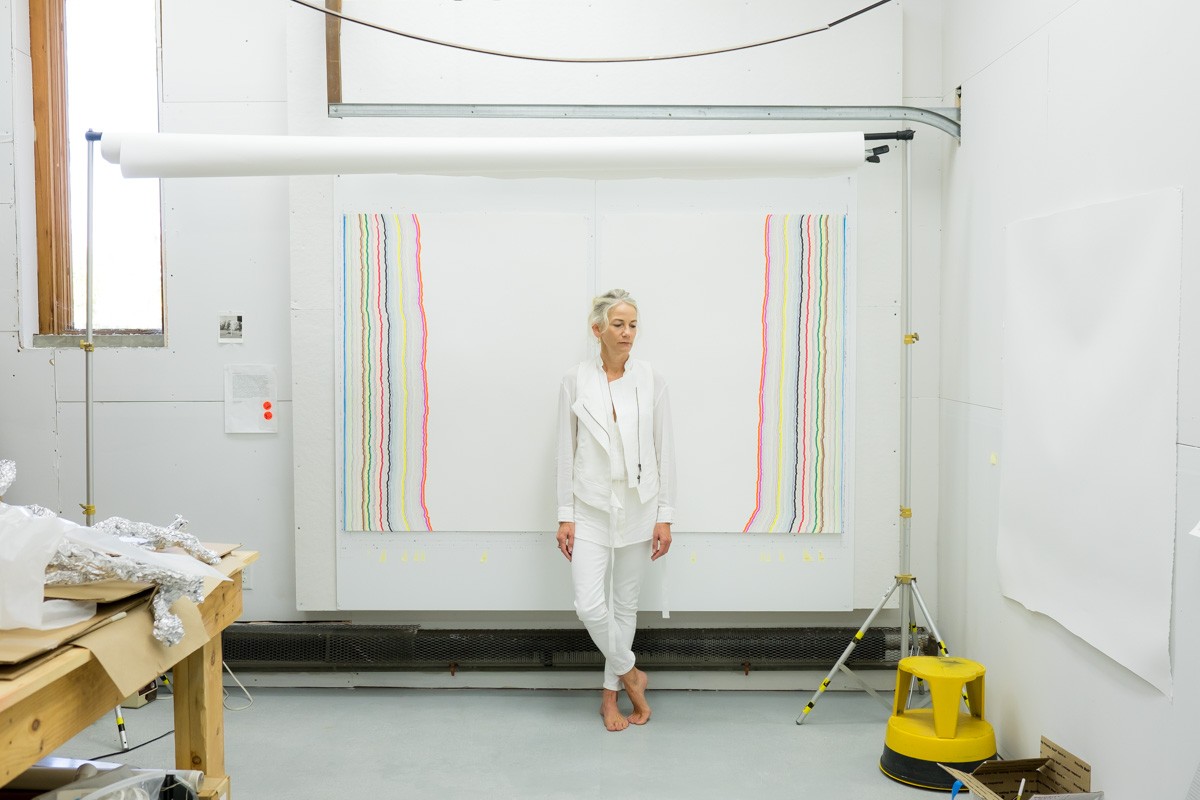 A Glimpse of Her Portfolio
And an Interview with the Artist

“In making art I am reflecting on what it means to be alive in this world, for myself and for others. If I’m honest, I hope that gets people thinking. That’s the transformative power of art as I see it.” -Rachel Perry

The contemporary American artist Rachel Perry works in a diverse array of media including sculpture, performance, drawing and photography—all in her own brilliantly inventive style. She uses the commonplace materials of consumer culture to create works of surprising beauty, intellectual impact, and humor: a vivid floral pattern composed of price stickers; a tapestry of twist ties; a lavish garment of aluminum foil; a mosaic of fruit stickers; a sculpture of bread tags; performance projects on Facebook and Twitter; an ongoing installation of miniaturized Johnson & Johnson product boxes at the J&J headquarters.

Her photographic self-portrait series Lost in My Life shows Perry camouflaged amidst her own work. In an iconic early image from this series, Perry has recreated her mother’s wedding dress in the same price-tag floral pattern that covers the walls and floor; she stands facing away, placing the final sticker, which says, “Try me.” 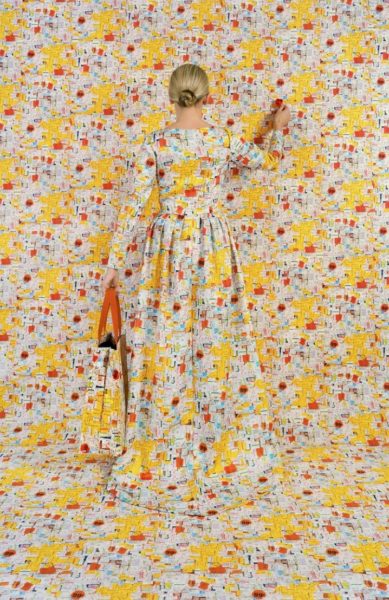 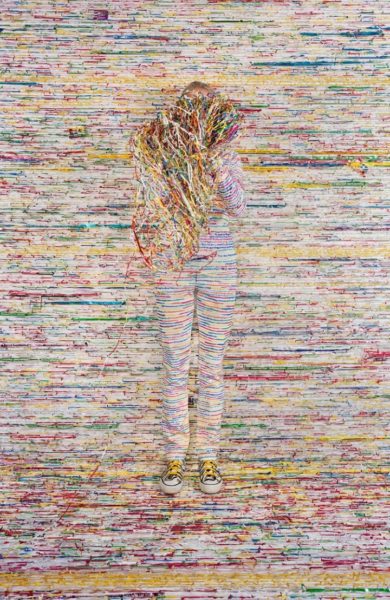 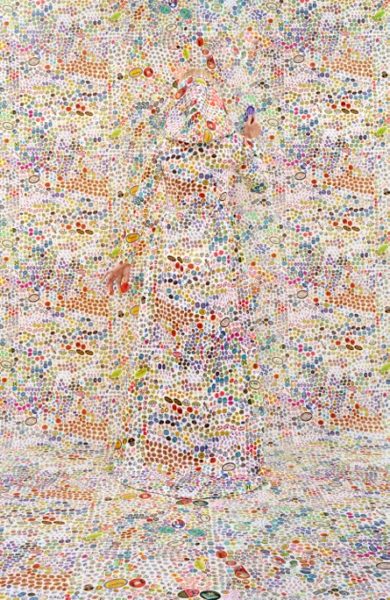 In 2011, Vogue magazine commissioned her to create a collection of Lost in My Life images using designer goods by Balenciaga, Givenchy, Kirkwood, Alexander Wang, and Prada. 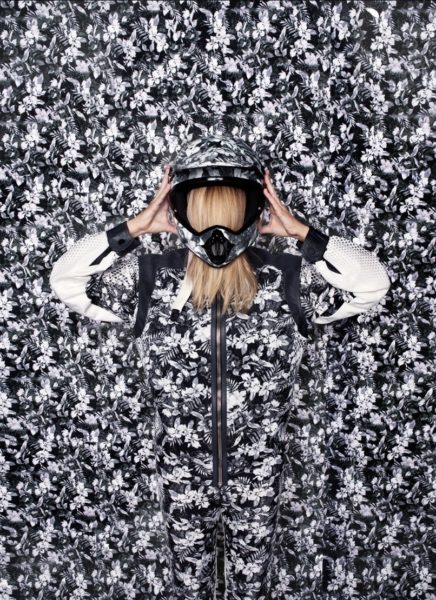 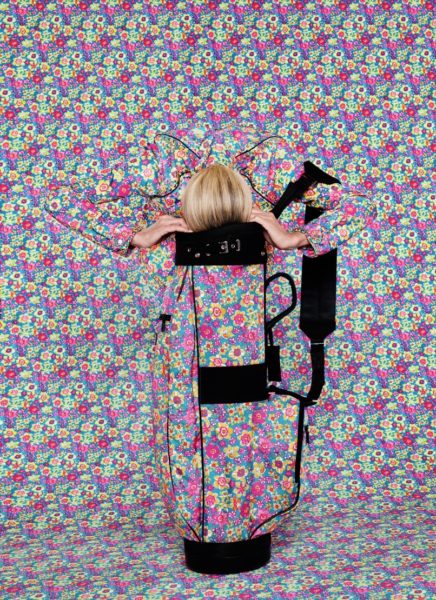 The New York Times Magazine has twice commissioned her work, most recently for their issue on the “Me Too” movement. She wears a black dress in this image—and amazingly, it was made before the 2018 Golden Globes awards, where the black dress became a statement of the movement. Perry wrote in her studio newsletter, “I was glad to be aligned this way in a fortunate bit of chance.” Though perhaps it’s more than chance: prescience arises from being fully, astutely tuned in. 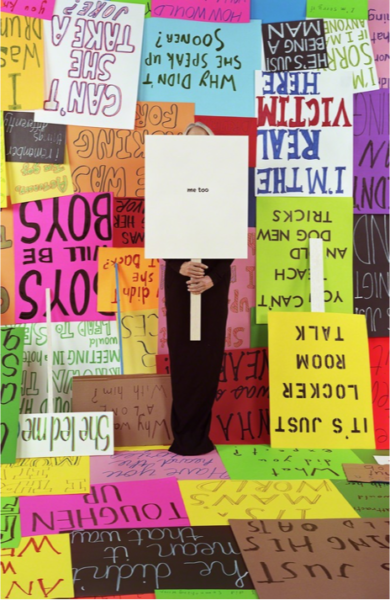 Perry’s work reflects a deep sense of perceptiveness and creativity in everyday life. She sees opportunities for art in seemingly mundane objects and experiences. This is a particular way of being present; through the power of her mind, the world becomes rich with artistic resources. She often saves, as raw materials, the things most of us reflexively discard.

For a 2009 video project, “Karaoke Wrong Number,” which appears at the Institute of Contemporary Art, Boston, Perry collected wrong-number voice messages left on her answering machine since 2005. She memorized and lip-synched to them—men’s and women’s voices—her face transformed by the tone and emotion of each speaker.

For her “Spam” sculptures, she lifted lines from spam email messages and used a single roll of aluminum foil to sculpt each one in script. 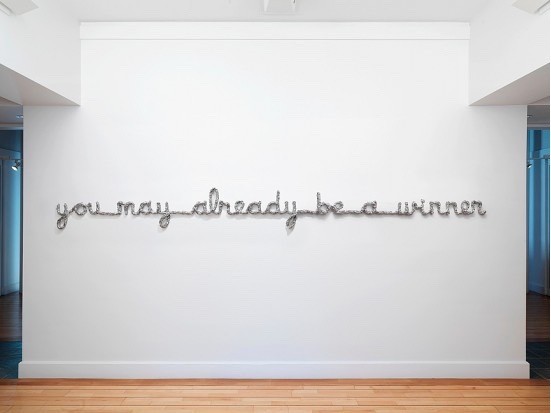 In her 2009 Facebook performance project, “Rachel is,” Perry attempted to faithfully answer the question in the status bar at that time—“What are you doing right now?”—every sixty seconds for an entire day. Social media was relatively new. “I had been thinking about and observing how we craft a persona online,” she told Art 21 magazine. “My performance was a way to make a quick and intense self-portrait.” The performance went viral and she received friend requests and comments from around the world. “The community became vital to my progress,” she said. “It was an endurance project, a marathon, and those comments sustained me.” 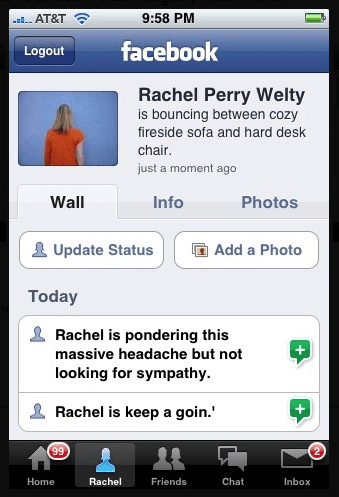 Her more recent Chiral Lines series began with the idea to make a drawing using every pen, marker, crayon and pencil in her house. She limited each implement to a single line, drawn first with her left hand and then with her right. The works, which have the organic quality of geodes, have also been compared to seismographs or EKGs. 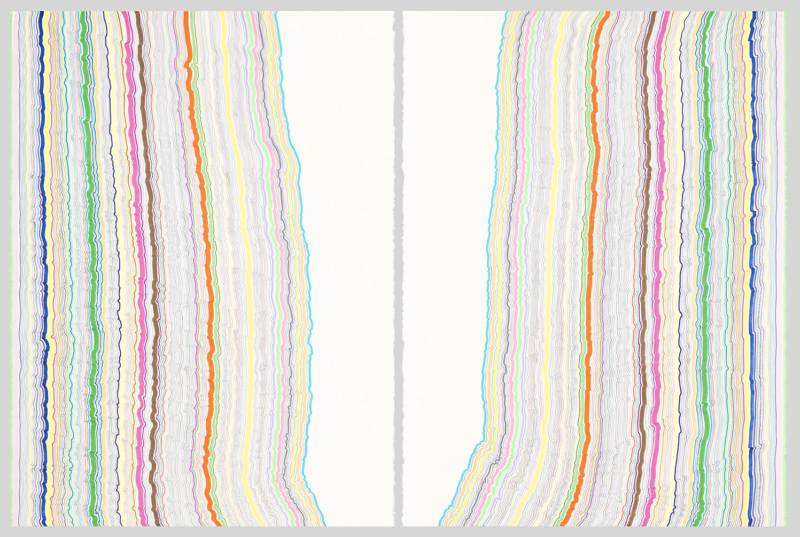 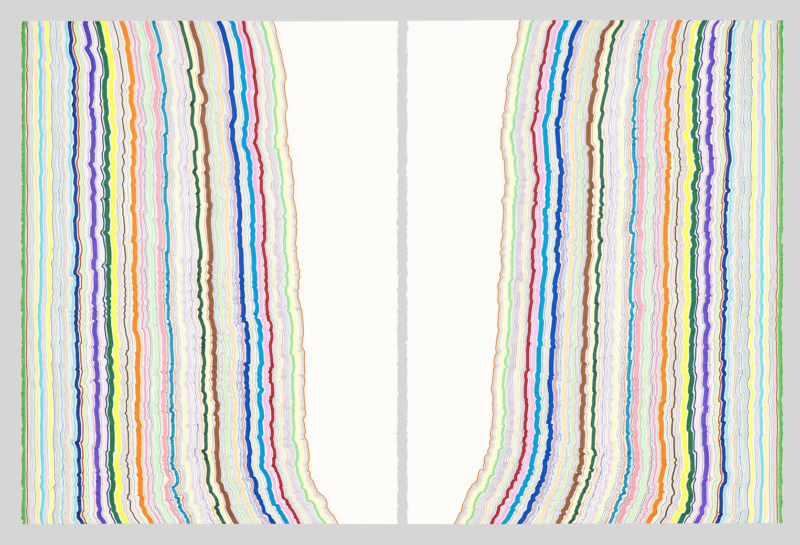 Perry has received numerous fellowships and awards and is the only artist to win the Massachusetts Cultural Council Award for Excellence in three different disciplines (Photography,  Drawing and Sculpture). Her work is in the Museum of Fine Arts, Boston; the Addison Gallery of American Art, Andover; the Isabella Stewart Gardner Museum Archives; the deCordova Museum and Sculpture Park; and the Baltimore Museum, among other collections. She has had solo exhibitions in the US and internationally. Her current solo exhibition in New York, Soundtrack to My Life, explores the background music Perry overhears in her daily life, with song lyrics assembled out of individual letters cut from magazines and junk mail. The show is at Yancey Richardson gallery until March 24th. 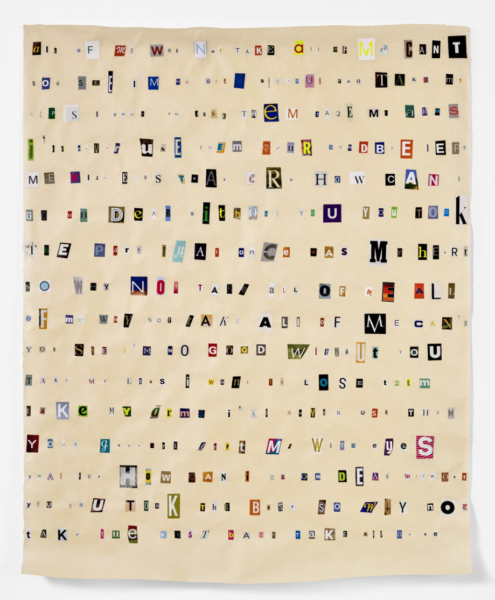 Soundtrack to My Life: All of Me by Billie Holiday (Bank), 2017. Magazine clippings and polyvinyl adhesive on kozo paper 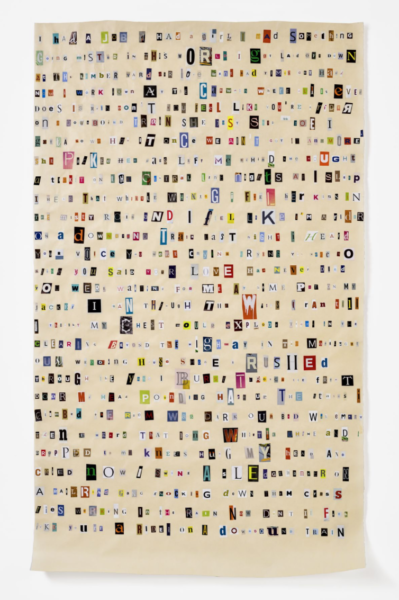 “My focus is on that opportunity that exists everywhere, all the time, if we are alive to the possibility.” – Rachel Perry

I interviewed Perry by email:

SW: When did you begin thinking deeply about consumer culture, and what motivated you to make art from its mundane materials?

RP: My practices are unified by an interest in the overlooked, the everyday, and the small moments that form the ballast of our lives. Themes of consumerism, information overload, language, systems, the fleeting nature of experience, the passage of time, humor, and ultimately life and death emerge in the work.

It’s hard to categorize my work, because I work in so many different media: drawing, installation, performance, video, and so-called “social” media. Lately I’ve also been using photography. For about a decade I’ve been making work that is largely conceptual and minimal, inspired by my own everyday life. Limiting myself in means and methods and imposing rules on the projects are strategies borrowed from the Conceptual and Minimal art movements. But I am not against making something beautiful. Beauty can draw someone in. Those who want more are invited to stay, to think, and look a little closer.

SW: What aspects of your early life contributed to your becoming an artist, and was there a particular moment when you knew art would be your career?

RP: I was born in Tokyo when my father, a college professor, was on a two-year Fulbright Scholarship. I lived there off and on in childhood. We also lived in Kyoto one summer in a temple. It was cheap housing and my parents were adventuresome. I think some of my keen interest in the beauty of the everyday comes from absorbing how life is lived in Japan.

I’m now living in Brooklyn, New York, but also have a permanent base in Gloucester, Massachusetts, where I have spent a portion of every summer of my life. Historically, Cape Ann has drawn artists and poets such as Edward Hopper and Charles Olsen who found beauty and inspiration in the rocks, water and the light. I always return because of the combination of the natural beauty and the fact that family still gather there.

When I was in high school I made two small abstract drawings on paper with colored felt-tip pens. They were a formal exercise: all lines in red, yellow, and blue, which incidentally remind me of the Chiral Lines drawings series I’m currently making. My art teacher told me I had talent and encouraged me to put them in an exhibition. I did, and they were subsequently stolen off the wall. I was both flattered and disappointed. I didn’t know then that I would pursue art seriously, though I do think that since my earliest memory I knew I was something, maybe something you’d call an artist. The encouragement I received in high school certainly pushed that forward.

My mother, after working for Edwin Land for 30 years as a scientific researcher, became an artist. After I saw her change in career, and the work she was making and the conversation around that work, I realized this was something I needed to do for myself. In 1997 I began attending the School of the Museum of Fine Arts, Boston, part-time, earning a degree in 2001.

The first mature work I ever displayed publicly was a large drawing with collage on paper. It took all term to make; I was attending the summer program at the Museum School. Each day I would spend a little time adding to the drawing, which was a handwritten text of my interior monologue layered over and over so as to become something else. I was accepted to the Diploma program at the Museum School based on that drawing. Ultimately it won First Prize in the Student Drawing Show that fall. This time, nobody stole it!

SW: Which artists (in any medium) have most inspired you?

SW: In Karaoke Wrong Number, how would you imagine these strangers responding if they discovered themselves in the work? (Or have they?) One of the things that strikes me is the compassion in your performance.

RP: I’m glad you mention compassion because it was extremely important to me not to satirize these strangers. I worked hard, first transcribing the messages, then typing up scripts, and finally memorizing each breath and hesitation—linguistic tics we all have—and I had to overcome my own in order to adopt those of my subjects. I wanted their humanity to come through.

At one point, I received a voice mail—if you can believe that—from someone for whom a message was intended. He had seen the video on exhibit at the Institute of Contemporary Art in Boston with his girlfriend, and recognized himself in the work. Fortunately he thought it was funny, and he tracked me down to let me know.

SW: Looking back on all the work you’ve created so far, which pieces do you feel closest to, and why? In other words, which works do you feel have most captured your spirit as a person and artist, whether intellectually, emotionally or visually?

RP: Once the work is made, I don’t spend a whole lot of time re-thinking or looking at it. I am generally on to the next idea. So I guess I’d have to say the one I feel closest to is the one I’m going to make tomorrow. Art can be seen as a mirror that registers and reflects life, or as a tool that transforms it. I think both are really true. In making art I am reflecting on what it means to be alive in this world, for myself and for others. If I’m honest, I hope that gets people thinking. That’s the transformative power of art as I see it.

SW: Since your life and creative work are intertwined, what’s the experience of your day like, as you interact with all these ordinary things that could become art?

RP: I perform daily on twitter as @racyperry, since 2008. I’m making a very long and slow self-portrait, a view into the daily life of a working artist, where I tweet just once each day, in exactly 140 characters. It’s my memoir, in an accretion of days.

I am always working on about a dozen or more things at one time. Some will never get beyond my brain to my hands. I’m still fascinated with the small moments in life. It seems to me that most of our lives are spent in an accumulation of these moments, with the rare moments of profound joy or acute sorrow. My focus is on that opportunity that exists everywhere, all the time, if we are alive to the possibility.

SW: Outside of your work, what do you enjoy doing—either as a break or as a way to cultivate your creative process?

RP: I have a regular yoga practice and I meditate daily. I run, I walk, I write. I read. love to spend time with my family—I have parents who are vital and engaged in their 80s, and many siblings and a wonderful son whose company I deeply appreciate and enjoy. My partner, Christopher Wilkins, who is a musician and conductor of two orchestras, likes to cook as much as I do and that’s one way we spend our time together. We talk a lot about our work. I’m always thinking and working. Whether I’m making breakfast or a drawing, it’s all art to me. 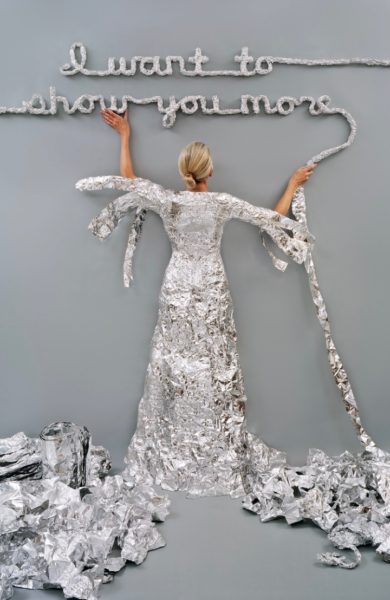