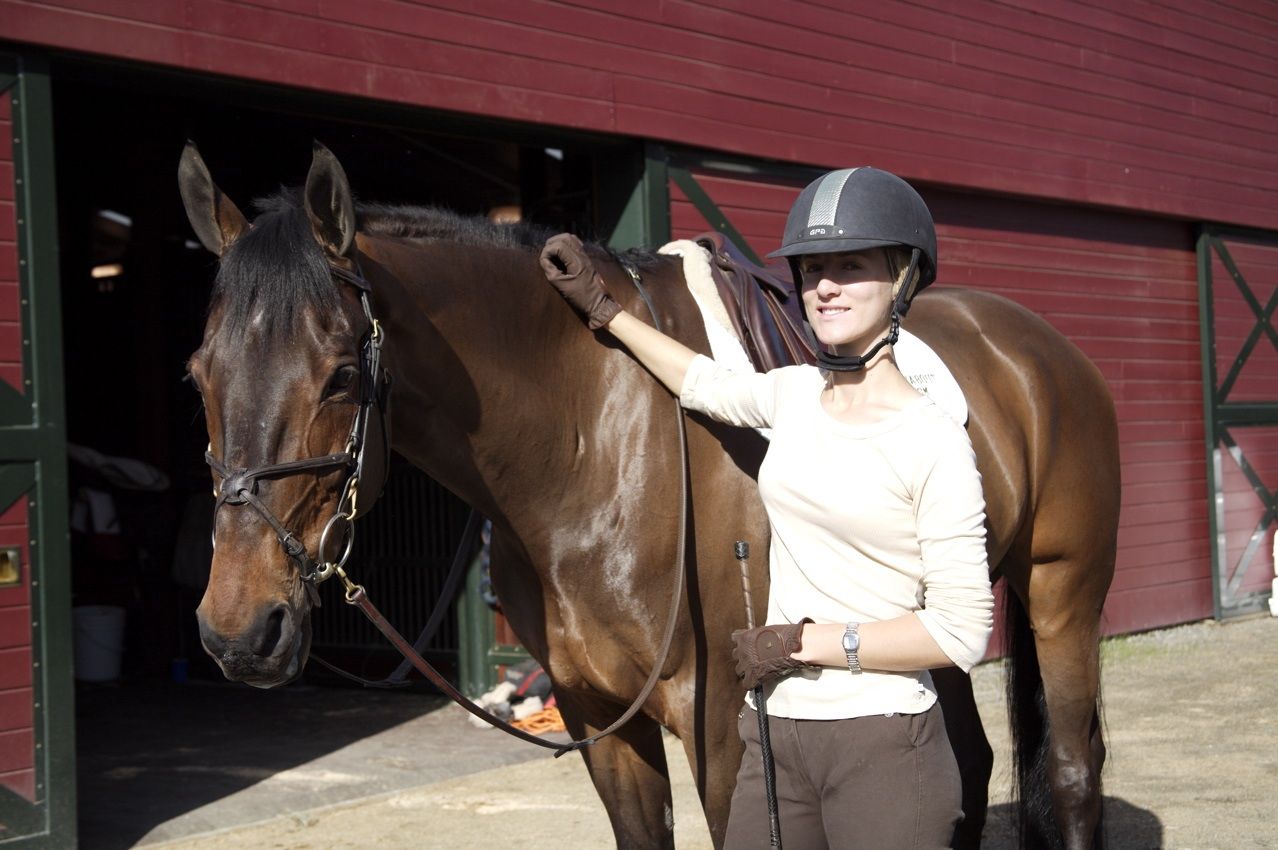 Hurricane came to Stanford with me for a couple of years. He lived in the renovated barn on campus. Stanford’s nicknamed “The Farm” because the whole place used to be a racehorse breeding farm. The historic red barn still stands, but the land around it has been mostly taken over by campus roads and golf course. Typical of those arid, high-rent Silicon Valley towns, the stable grounds are tight quarters: small sand paddocks for turnout, sand arenas for riding, narrow strips of grass and dusty stable yards, bright flowers in planters, palm trees, nowhere to trail ride.

There was one field off to the side—disputed territory. The horse people wanted to keep it, but some other department wanted it, too. When I finished working Hurricane in the arena, I’d tap the side of his neck and he’d turn his head to me so I could loosen his noseband. Then I’d ride him out to that field, which had long, wild grass in spring. I could see his expression change when he caught sight of it: pure happiness. I’d let him wander and graze. I loved being on his back and watching his contended eye. He tore at the grass and hardly came up for air.

When we first moved into the barn, post-renovation, the new arenas’ footing was too deep. Rather than ride and risk him injuring a tendon, I long-lined Hurricane on the dirt road around the barns. He was impeccably trained. He trotted in graceful, round posture while I power-walked behind him. In the small dressage ring, where the footing was better, he’d even do lateral movements on the lines—haunches in, half-pass—beautiful to watch; with only the light cues of reins against his body and bit in his mouth, he had to want to do those things. I could see him concentrating.

Weeks later I jumped him through a gymnastic exercise. It was a bounce (two small jumps with just enough room between for the hooves to touch down and take off again), then two strides to a triple-bar (a wide jump that requires power to clear), then one stride to a tall vertical (where the horse needs to rock back for a high, careful arc). Hurricane had done this kind of thing many times; he was a gymnastic-jumping pro. Gwyn, the trainer helping me, kept raising the jumps. She asked if I wanted to do more. I said, “I’d like him to power forward a little more for those two strides to the triple bar.” I circled back, and it felt as if he’d heard me. He landed from the bounce and, before I could leg him, sprang forward and burst into the air. “You mean kind of like that?” Gwyn said. “I didn’t even ask him,” I told her, both of us looking at Hurricane in amazement. Not mind-reading; he’d just figured it out on his own.

By summer, the grass in our grazing field withered and died. It seemed to happen overnight. One day I rode him out there as usual, and the grass was yellow and dry. He looked around, seemingly in disbelief. I let him walk where he chose, but he couldn’t find grass he wanted to eat. Back at the barn, I fed him extra carrots. I knew I couldn’t keep him there much longer. He lived for grass, and it wasn’t fair to make him stay in this grassless place. I sent him to Gwyn’s barn across town, and in the end I decided to move back east. Tough to leave Palo Alto, but New England is better horse country, and that was one of the things that pulled me home.

Here we are recently on a formal-photo occasion. Hurricane was twenty-three: 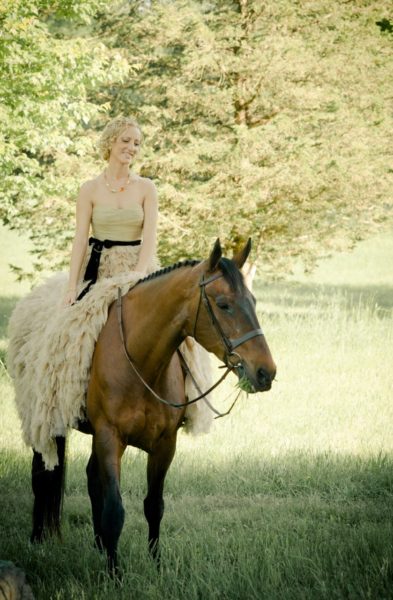