The Kids, Home At Last! 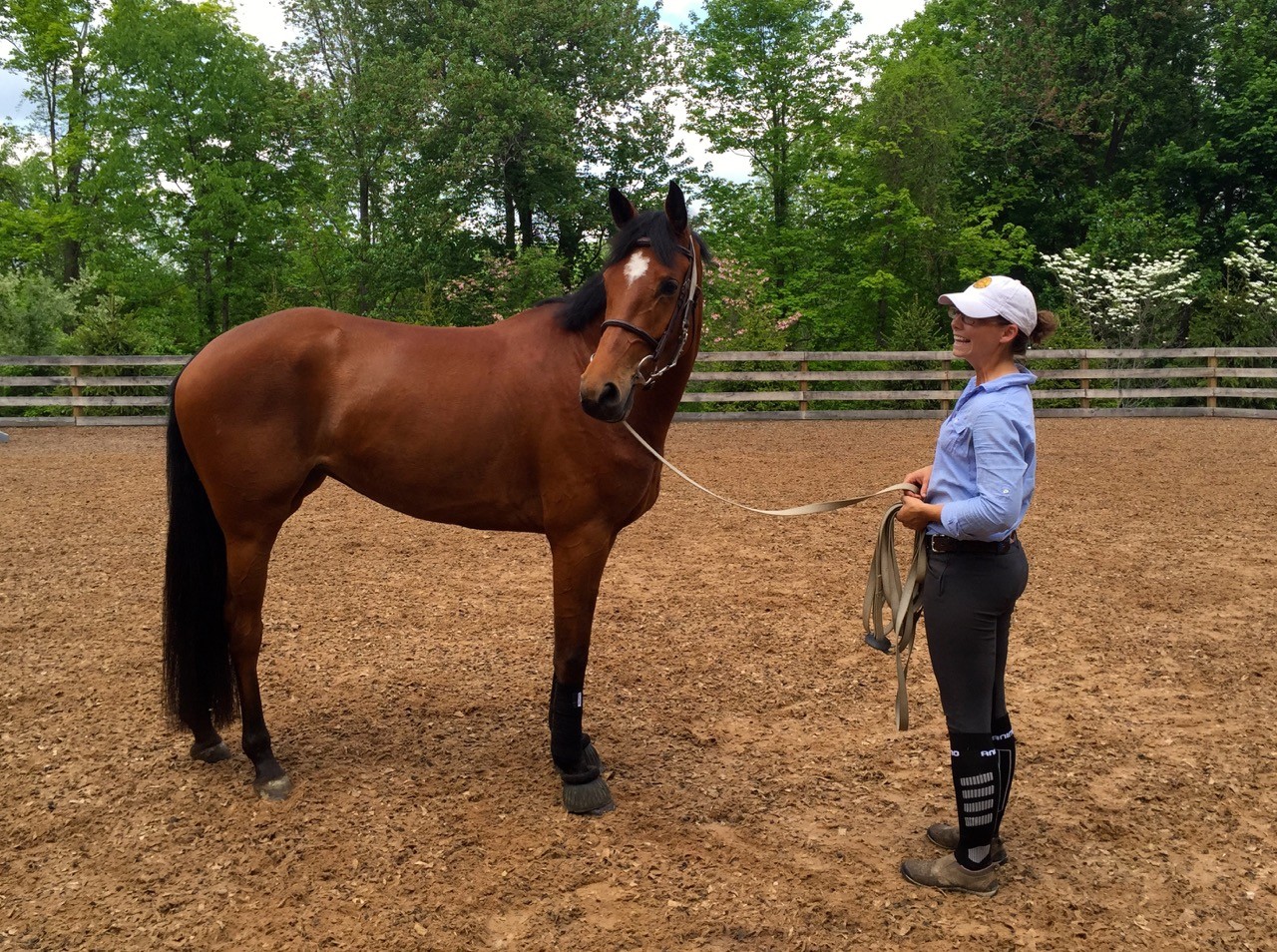 My mares’ kids, that is… Three mares, nine years, thirteen foals. All in Europe, the jumper-breeding capital of the world. And now, for the first time—finally!—we’ve brought some of them home: two fillies and a colt, four and five years old.

How to convey the big-dealness, for me, of this moment? These are the children of two mares who gave me some of the brightest days of my career. Lapeti and Labelle, both small and fiery and known for their speed and competitive grit. Mares with whom I had a thing—that horse-rider bond, that unspoken agreement, about trusting each other and knowing each other and believing in what you’re capable of together.

Lapeti and I won all six Sundays of the Florida Winter Equestrian Festival in the year 2000—all five $10,000 Junior Jumper Classics, plus the individual Young Riders gold medal. A year later, Labelle gave me my first Open Jumper Grand Prix win—in her first-ever Grand Prix start. Both mares are so small they’re almost ponies, with the heart to try anything I asked. Both hot-blooded and sensitive—fire-breathing types who’d drag me to the jump at top speed if I let them. 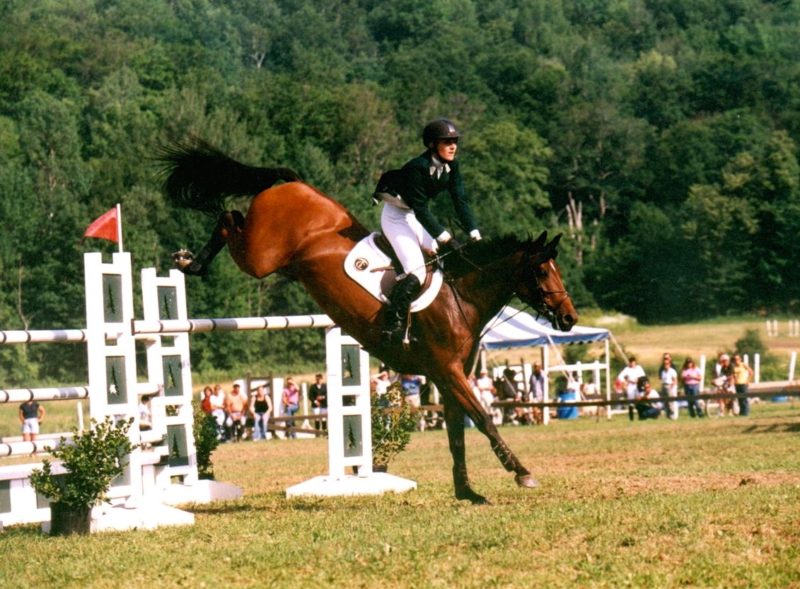 It took a few years before we succeeded in breeding them, so these are their oldest offspring. I’ve met them only once before, briefly, in Hamburg, Germany. The older two were at a busy training barn, just learning to jump. The younger mare was standing in a field with her herd of friends. I’ve seen no video of her in action, and only a single grainy, distant iPhone clip of each of the others. Why the dearth of videos? Believe me, I’ve pestered the people in charge. They’re not the best communicators, but they take good care of the horses. Hard to find someone you can trust to do that, especially from such a distance. 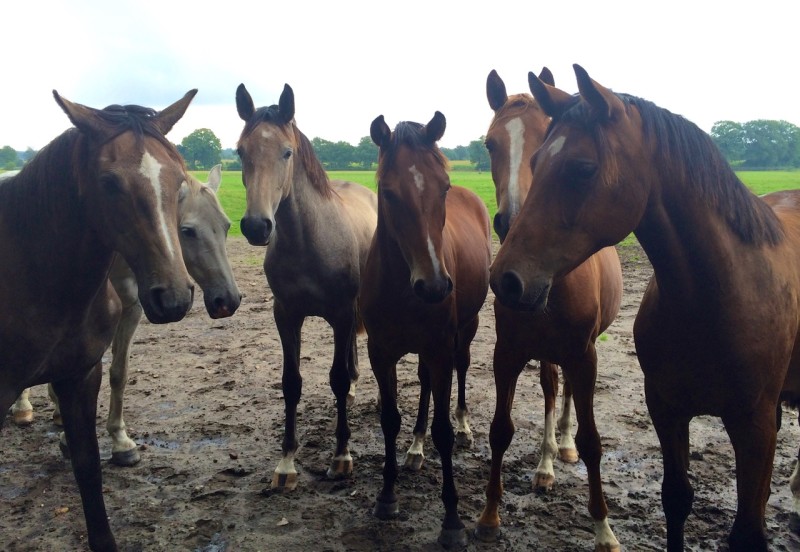 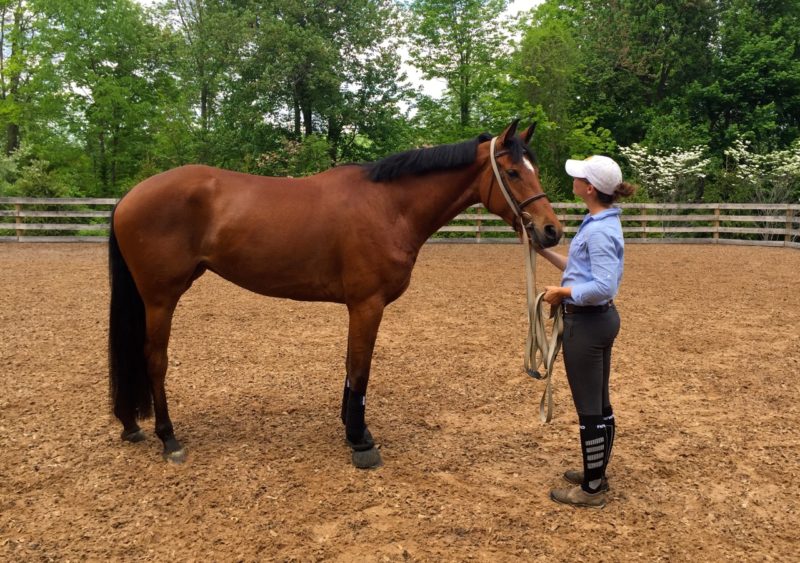 And so it feels like I’m meeting these young horses for the first time. I don’t know their personalities or what they can do. (And they can’t all be stars; any breeder knows that from the outset.) But after nine years of working on this, and dreaming, and waiting, it just feels so good to have the first ones home. Especially poignant is how strongly the oldest two resemble their mothers. Labelle’s son has his mother’s intent face, big forelock, and sensitive nature. Lapeti’s daughter has her mother’s brawny haunches and springy gait.

Eddie, the gelding, came straight to our farm; the mares, Aspen and Eloise, are in quarantine with Miller & Associates ten minutes from our farm. Katie, our new rider, says she likes small horses that go around the course like dirt bikes. Well, that seems to be what we’ve got. (Though Eloise, age four, is bigger than the others and not finished growing.) Yesterday we gave both fillies a light exercise on the longe line; both looked wild stepping out of the barn and then surprised us by behaving beautifully. 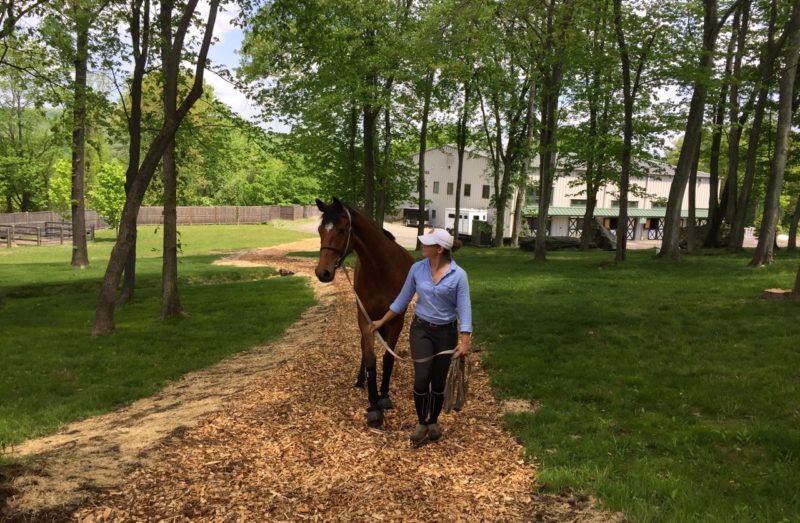 On the way to the ring 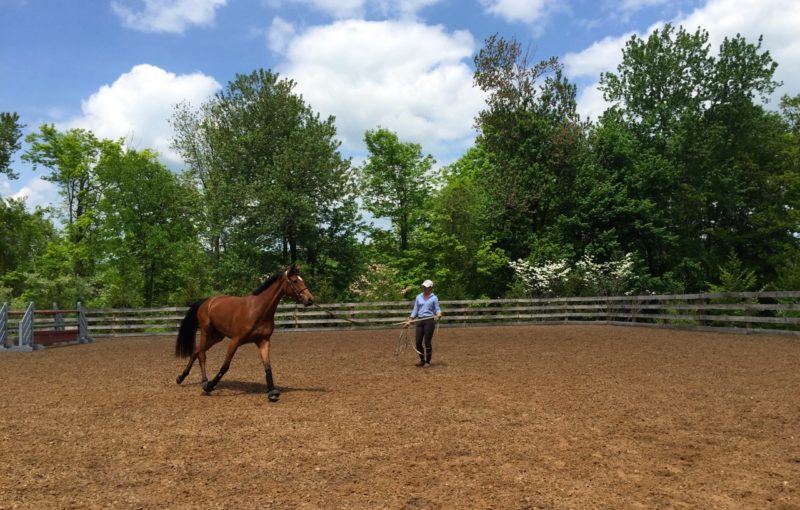 Eloise on the longe line 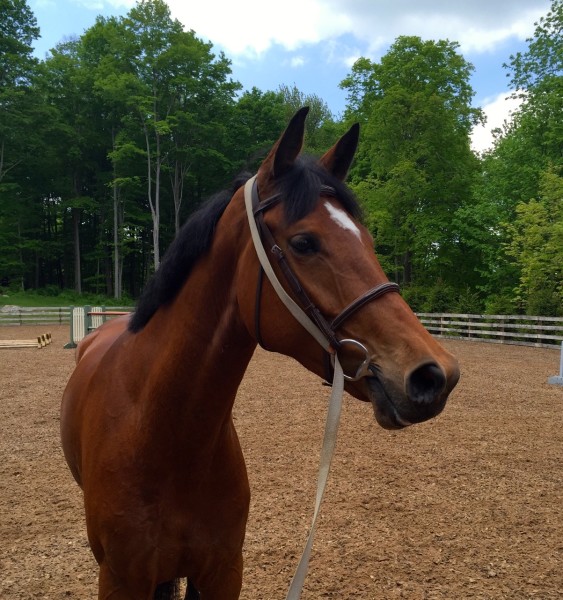 After a quick get-the-kinks-out longe, Katie rode Eddie in our indoor ring, then followed one of our older horses on a trail ride. 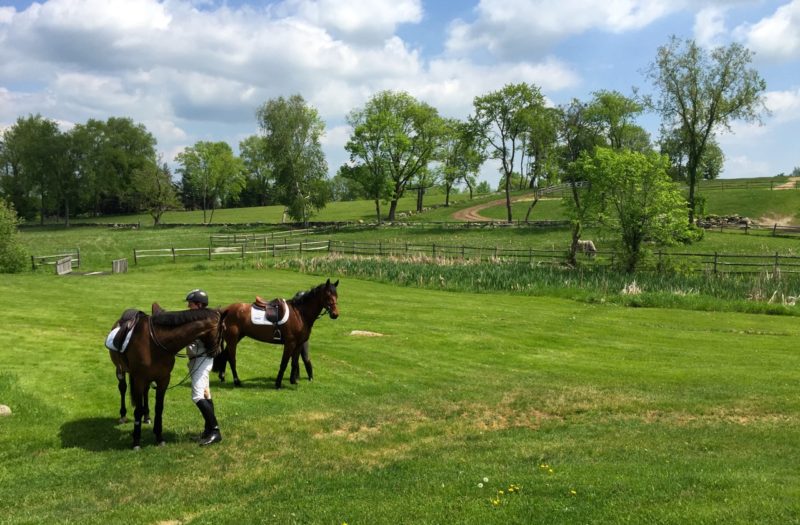 Just back from their ride 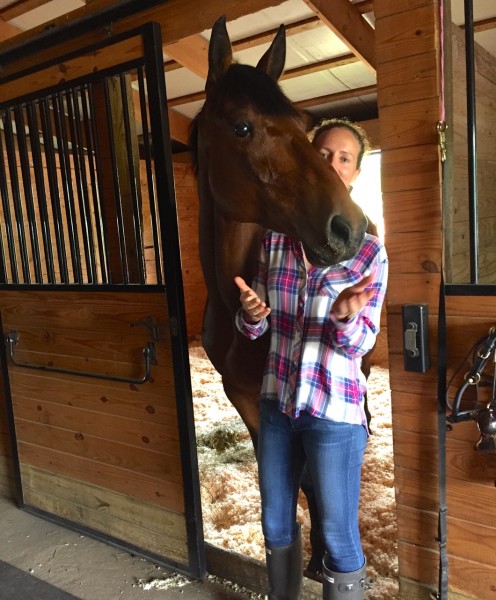 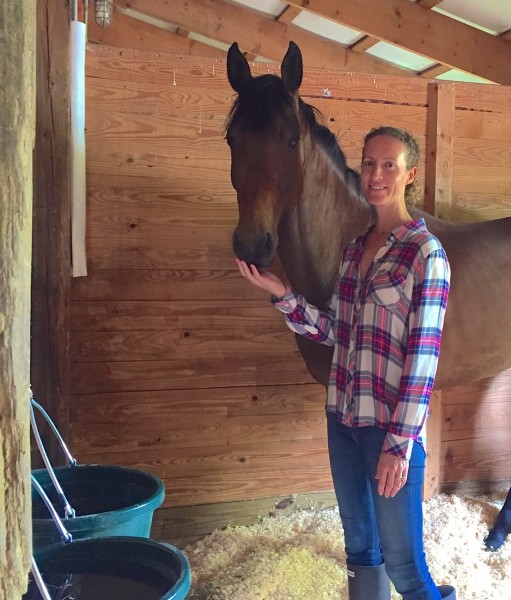 Been waiting a long time for this moment

Eddie’s sire is Emilion, whose most legendary offspring just happens to be Glasgow, resident of stall number three, right here between Firefly and Grappa. Glasgow was Norman Dello Joio’s superstar. That Florida winter when Lapeti and I stormed the Junior Jumpers, Norman and Glasgow won four of the six Open Jumper Grands Prix. I never guessed I’d see Glasgow wearing a blanket with “Willeman” embroidered across the side. He’s retired at our farm now.

Glasgow is a phenomenon, and not always easy in retirement. He’s like a pampered celebrity who expects service at all times and doesn’t know what to do with free time. Luckily we inherited the former neighbors’ little black pony; with her nearby, he’s willing to chill in the pasture all day. Funny thing is I bred to Emilion because of Glasgow before I had any connection to that great horse. Eddie looks nothing like Glasgow—mom’s genes must be strong—but if our boy has even a fraction of Glasgow’s talent, we’ll be golden. 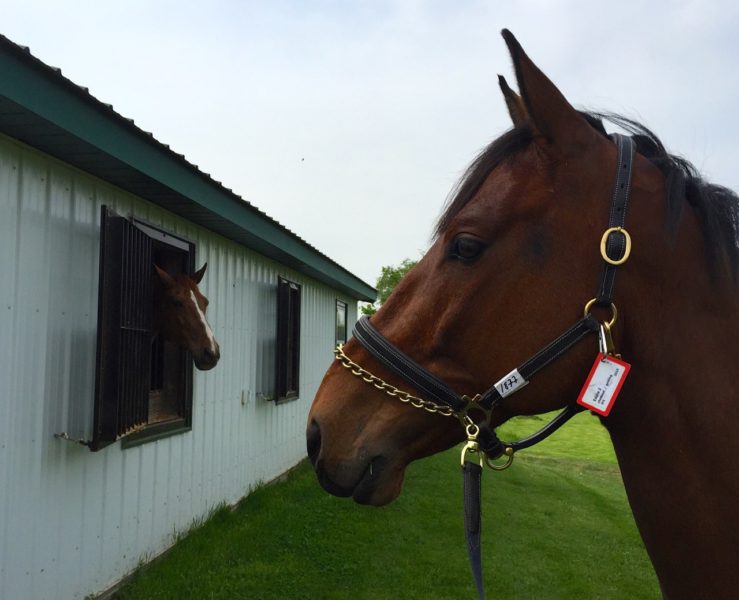 Eddie still frisky for his first hand-graze on our lawn; Glasgow looking out his window

More about these young horses soon. In the meantime, we ended the weekend at the beautiful Old Salem Farm horse show, just down the road from our farm, watching the Grand Prix from the upper-level VIP pavilion. What a view! 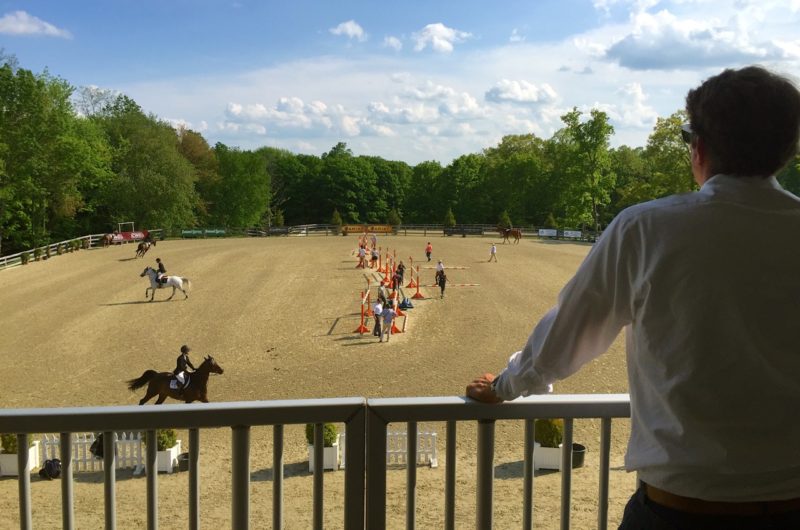 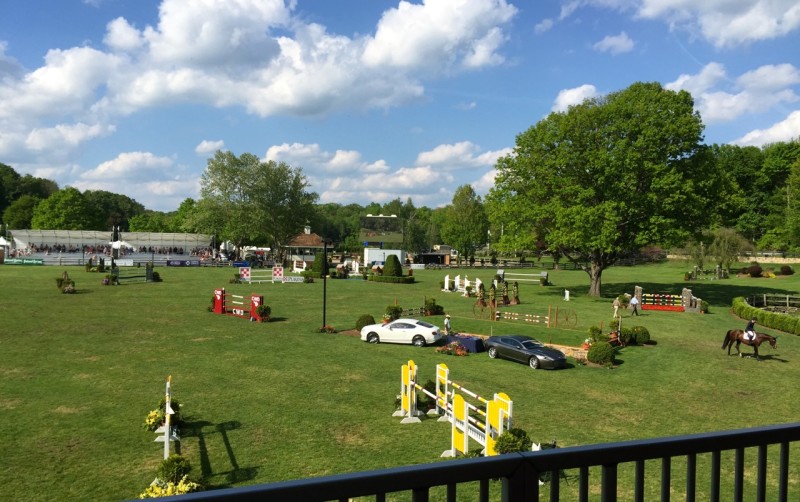 And the Grand Prix field 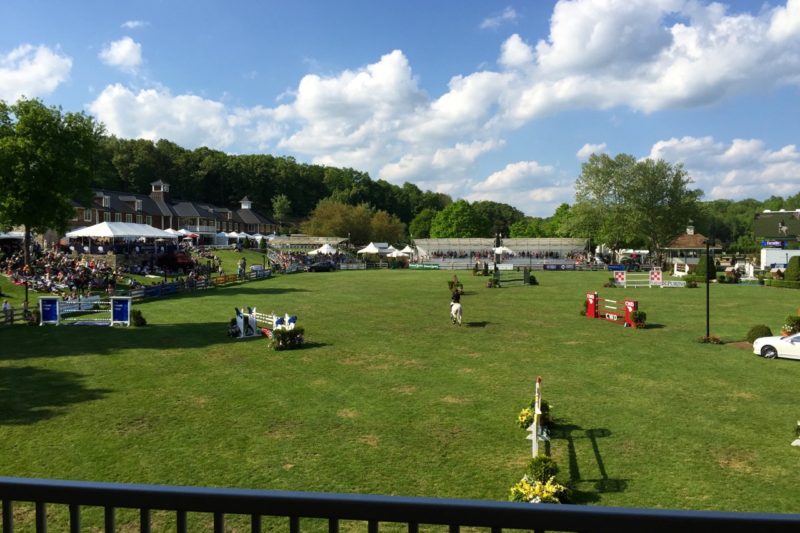