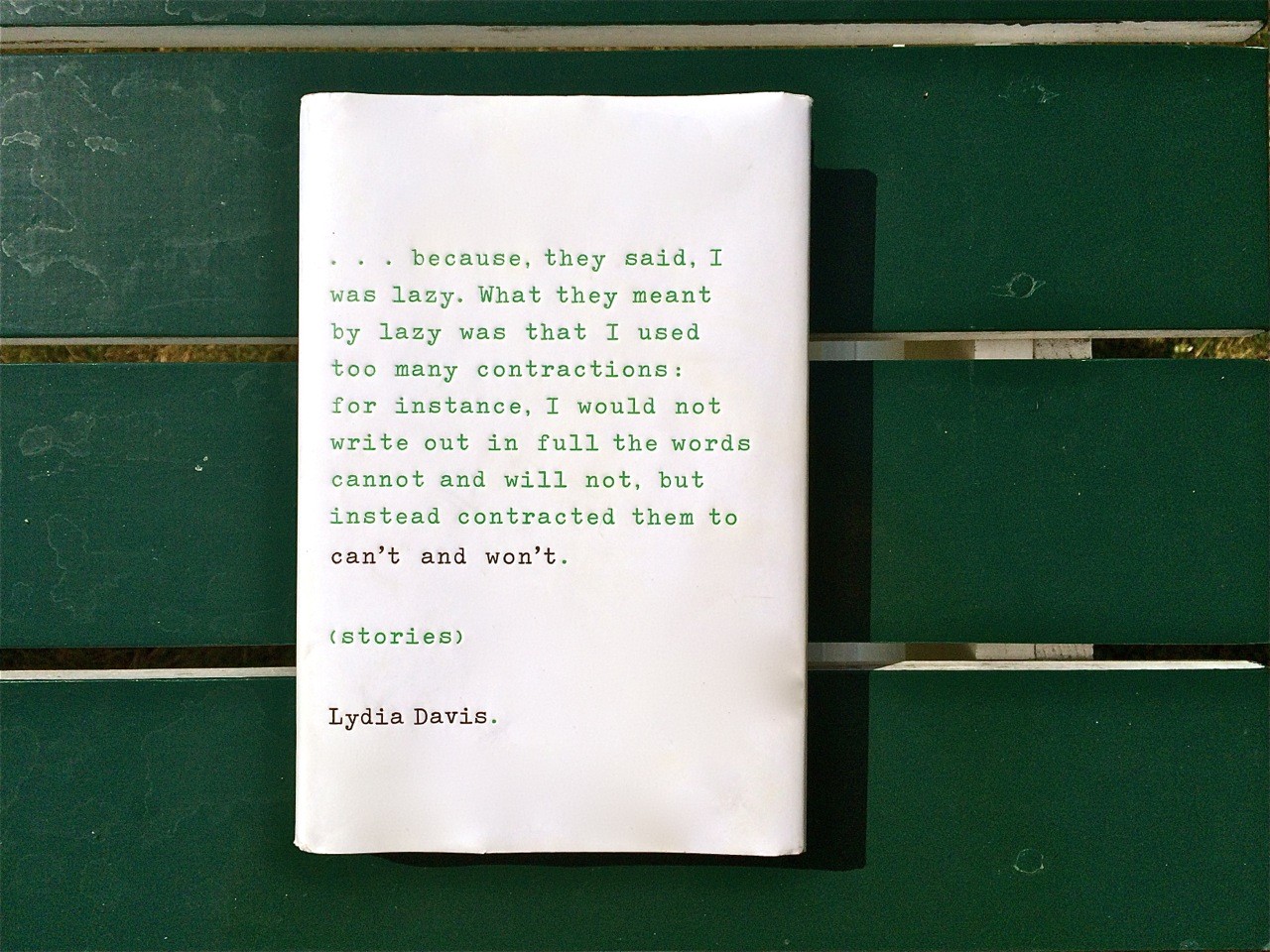 Just back from Normandy, land of happy cows, I’ve been thinking about this Lydia Davis story I like, wherein the narrator watches a trio of cows that live next door. That’s it. A series of cow images and observations of cow behavior. Plotless, as most of Davis’s stories are.

She is a Man-Booker-International-Prize-winning short-story writer and celebrated translator of Proust and Flaubert. Her stories and translations have in common this minute attention to the qualities and nuances of things: the object in front of her; the experience of one small, uncomfortable moment; the subtle difference between one word and its synonym.

“The Cows” is a really beautiful study in close observation, something all literary writers do. Genre fiction can crash through its plot-driven formula with no attention to prose quality; most readers don’t care about that. But if you do care, then Davis’s work is a treat. This story reflects a meditative power of mind—the ability to be present, completely tuned in to the current moment. Writerly observation in its purest form:

They amble into view from the far side of the barn with their rhythmic, graceful walk, and it is an occasion, like the start of a parade.

They come from behind the barn as though something is going to happen, and then nothing happens.

Two of them are beginning a lively game of butt-your-head when a car goes by and they stop to look.

Because there are three, two can worry about the third, for instance the one lying down. They worry about her even though she often lies down, even though they all often lie down. Now the two worried ones stand at angles to the other, with their noses down against her, until at last she gets up.

I love the subtle humor and melancholy, the images (“the three cows are standing end to end, each touching the other, like paper cutouts”), the musings on cow psychology. Naturally, the psychology stuff is about humans, too. Later in the story’s sixteen pages (long for Davis!), we’re suddenly onto more serious matters—life and death, powerlessness—but Davis does this with the lightest hand:

They do sometimes protest—when they have no water or can’t get into the barn. One of them, the darkest, will moo in a perfectly regular blast twenty or more times in succession. The sound echoes off the hills like a fire alarm coming from a fire-house. At these times, she sounds authoritative. But she has no authority.

There is care in the narrator’s attention. Now that I know these cows so well, I feel relief that the third wasn’t slaughtered. Make the reader care about what happens to the characters—that’s what fiction writers want to achieve. Davis does it by bringing the reader very close to the cows (sneaky and brilliant use of the second person here):

Forms of play: head-butting; mounting, either at the back or at the front; trotting away by yourself; trotting together; going off bucking and prancing by yourself; resting your head and chest on the ground until they notice and trot towards you; circling one another; taking the position for head-butting and then not doing it.

Another craft lesson: she does what my NYU instructor David Lipsky calls setups and callbacks, where you plant an idea and then come back to it, creating continuity in the story’s world and giving the reader a little reward for paying attention. The “play” passage contains two callbacks: the worrying when somebody lies down, and the butt-your-head game.

I find her work slyly, delightfully funny, as in her story “I’m Pretty Comfortable But I Could Be a Little More Comfortable.” It’s another series of experiential glimpses:

The people in front of us are taking a long time choosing their ice cream.
The cuff of my sweater is damp.
I didn’t get two seats to myself on the train.
I ordered an oat bran raisin muffin lightly toasted, but it wasn’t lightly toasted.
My sheets get all twisted in the dryer.

Complaints we’ve all heard or made silently to ourselves, or felt but never articulated, even in thought—so to see them on the page, experienced (and admitted!) by someone else, is a small pleasure. The kind of thing I read for—bringing those private but shared experiences into the light—undignified or ridiculous but funny in that yeah-that-sounds-kinda-familiar way.

My husband is not especially entertained by this “I’m Pretty Comfortable” story. I tried it out on my writer-friends, at the beach during our Gloucester retreat: much more of a hit. I developed a theory. Maybe the difference between literary and non-literary writing has something to do with a writerly neurosis—the mind that registers these minute complaints, obsesses over details, enjoys finding, or seeing that someone else has found, exactly the right word. This is the kind of mind that Davis has, and it’s this kind of mind that delights in her work. (From my husband’s non-writer perspective, a heavily plotted historical novel looks a lot more appealing.)

Of course, it’s not necessarily a plot-or-prose tradeoff. Sometimes you get both, as in Donna Tartt’s 2014-Pulitzer-Prize-winning novel, The Goldfinch: plot-driven suspense that puts the best-sellingest genre fiction to shame (Will the stolen masterpiece be discovered and ruin his life forever?), plus prose so beautifully crafted that it seduces nerdy writer-types like me for all of its 771 pages. Or Michael Chabon’s Wonder Boys: masterful, exuberant writing, and the dead dog in the trunk of the car keeps you ripping through to the end.

Can’t and Won’t is better digested in small doses. The effect of the stories, taken together, can be powerful and dark. Adam Thrilwell’s review in the New York Review Of Books ends with these two deeply sad passages from what he calls her “most disturbing story,” “The Seals,” in which the narrator, on a train ride to some holiday gathering, ruminates on the deaths of her father and sister.

I know you’re supposed to be happy on this day. How odd that is. When you’re very young, you’re usually happy, at least you’re ready to be. You get older and see things more clearly and there’s less to be happy about. Also you start losing people—your family.

That fall, after the summer when they both died, she and my father, there was a point when I wanted to say to them, All right, you have died. I know that, we have all absorbed this and we’ve explored the feelings we had at first, in reaction to it, surprising feelings, some of them, and the feelings we’re having now that a few months have gone by—but now it’s time for you to come back. You’ve been away long enough.

There are lighter pieces, too. In “Letter to a Frozen Peas Manufacturer,” the narrator explains that the unappealing peas depicted on the package do not represent the delicious peas inside; describes what specifically is wrong with the package art; and concludes, “You are falsely representing your peas as less attractive than they actually are. We enjoy your peas and do not want your business to suffer. Please reconsider your art.” The creator of said packaging clearly does not have a Davis-esque mind.

In “A Story of Stolen Salamis” (which Thirlwell calls “a little totem of linguistic precision), the wronged party insists on correct diction:

My son’s Italian landlord in Brooklyn kept a shed out back in which he cured and smoked salamis. One night, in the midst of a wave of petty vandalism and theft, the shed was broken into and the salamis were taken. My son talked to his landlord about it the next day, commiserating over the vanquished sausages. The landlord was resigned and philosophical, but corrected him: “They were not sausages. They were salamis.”

“Local Obits” takes a sly approach to linguistic awareness. It’s another list, a series of specimens of provincial newspaper copy—summing up ordinary lives in a style that’s noticeably non-writerly:

Alfred enjoyed his best friends, which were his two cats.
With regrets, Mary Ellen leaves behind her son James.
“Tootles” enjoyed puzzles of all kinds, painting items her husband built, and keeping in touch with family and friends via the computer.
He was a member of the Ruffed Grouse Society.
She will be remembered for her book collection, especially those written by her favorite author, Nora Roberts.
She sang in the church choir and served briefly as church treasurer.
Anyone who knew her, knew her love for Tigger.

I find these funny and incredibly depressing—entire lives behind these inadequate sentences. So many people known for their love of woodworking or cats. So many avid hunters and sports fans. Nobody given real distinguishing details except one man, a “master plumber” and “member of the Federation of Polish Sportsmen,” who, it turns out, also “loved his thirty-five race horses.” Well, then.

There exists a meta-awareness over this story—a wink from the writer, it feels like—Can you believe this stuff? I read with my writing-workshop eye (Well, I suppose I always do): Find a more particular detail; Is “with regrets” really the phrase you want here?; She loved puzzles—is that all you can think to say? The heart of this story is mostly in what’s omitted, these lives that sound so unremarkable and yet mattered so deeply to a handful of people.

How to capture real life, or make a life feel real, in writing—that ubiquitous craft-class topic. Show the character’s vulnerabilities and desires. No sparkling heroes or one-note villains. Make them complicated, with human flaws. (Thank you, J.K. Rowling, for Severus Snape!) Make them distinguishable from all the other flawed humans on Earth.

Here’s one of the passages I love most of all in this book, from the story “Writing”:

This is not the book’s final story. Of course Davis herself won’t quit writing. And neither will the rest of us whose minds, for better or worse, work in a similar manner.