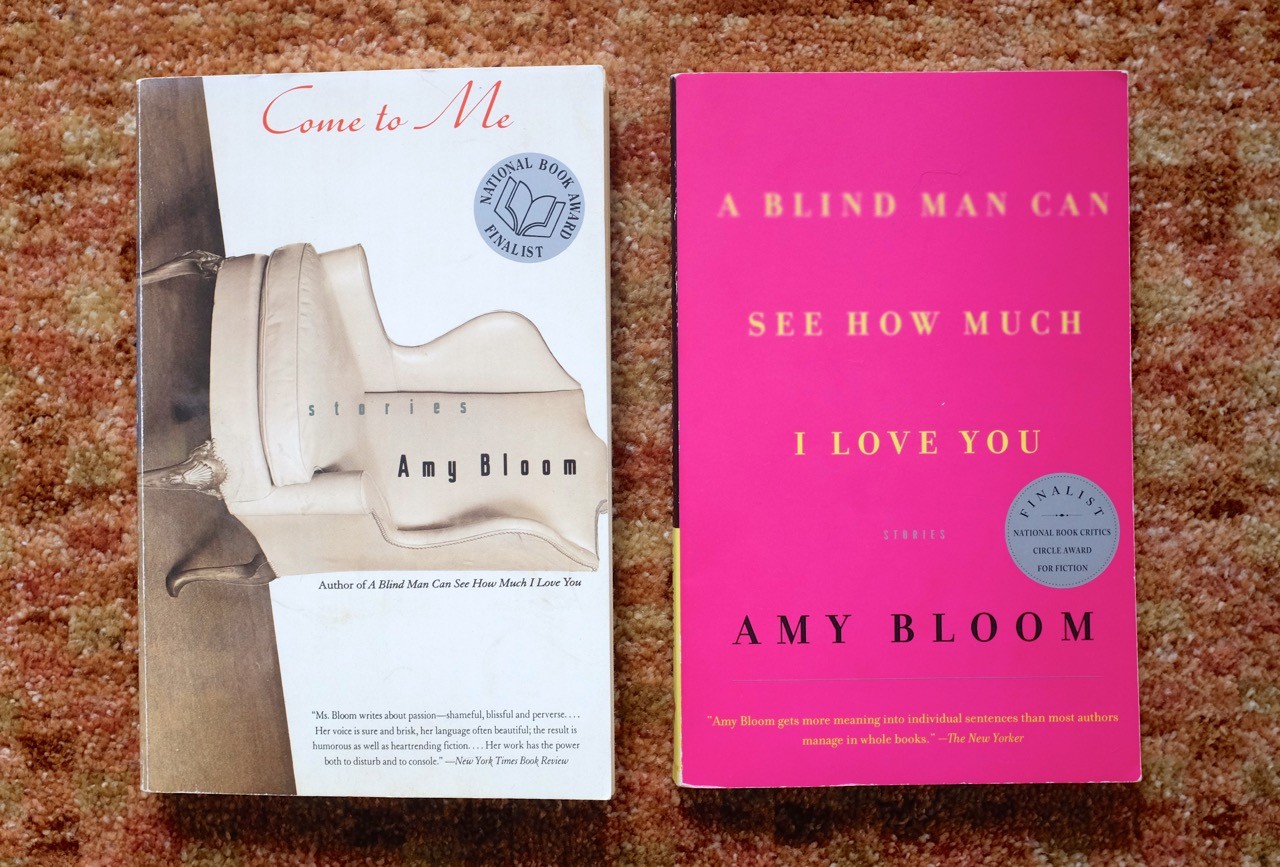 A Facebook friend of mine recently posted this about her marriage, which she entered into later in life than most: “Who would have known that my first date 8 years ago today, with a man I met through Yahoo personals, would lead me to a life of love I never expected to experience? To many, many more anniversaries!”

In their photos, they both look astonished with happiness, as if they can’t quite believe their good fortune. She has always been elegant and neatly stylish; now she looks youthful. Pictures can lie, but I don’t think these ones do. And I like to think of my old friend finding her life transformed, in this most profound way: to love someone truly, and to have the gift of many years together.

In stories, this is not often how it goes, mainly because wedded bliss is not very interesting. Unless you’re a Chicken-Soup-for-the-Soul kind of reader, love stories need tension-inducing problems: the lovers are not allowed to be together because they come from warring families, or they’re married to other people, or they’re gay in the midst of homophobic ranch country; the lovers are separated when one of them is captured by pirates or convicted wrongfully of a crime; the love is unequal or unrequited or doesn’t last; or one of the lovers dies.

Amy bloom is a psychotherapist and fiction writer. She writes about affairs, psychotic breaks, parental cruelty, terminal illness, and misfit couples. Her characters find love in the most unexpected ways, often with the last person they’d have meant to choose. This is not always for the best, in terms of the characters’ lives, but it makes for good fiction.

Come to Me was published first; then, seven years later, A Blind Man Can See How Much I Love You. That collection opens with its title story, in which a mother helps her daughter—soon to be son—prepare for the brutal surgery of sex reassignment. The mother, in her navy pantsuit and pearls, determined to care for her child, finds herself falling for a man she met at the Rite-Aid near the hospital, an endocrinologist whom she thought at first was gay.

The next story, “Rowing to Eden,” also plays with expectations about gender and sexuality. An early passage:

Ellie believes that all straight men should be like her father: stoic, handy, and unimaginative. They should be dryly kind, completely without whimsy or faintly fabulous qualities. As far as Ellie’s concerned, gay men can be full-blown birds of paradise, with or without homemaking skills. They can just lounge around in their marabou mules, saying witty, brittle things that reveal their hearts of gold. Ellie likes them that way, that’s what they’re for, to toss scarves over the world’s lightbulbs, and straight men are for putting up sheetrock.

This from the point of view of a gay woman who later falls into a mournful intimacy with the husband of her best friend, who’s undergoing chemotherapy for breast cancer. (And the husband is not exactly a putting-up-sheetrock type of guy.)

Here’s the beginning of “The Gates Are Closing”—bold, provocative and surprisingly tender:

I slid my hands up the legs of Jack’s shorts to stroke the top of his thigh, and he lost his grip on the paint roller. A hundred tiny drops flew through the air at me. Thoroughly speckled, squinting to keep the paint out of my eyes, I stroked higher under his boxers, right up the neat, furry juncture of his crotch.

“Jesus,” he said. “It’s not like I have any balance anyway.” Which is true. He has Parkinson’s, and no sensible group of people would have him painting their synagogue if it weren’t for the fact that he’s been painting houses for twenty-five years and is the synagogue president’s husband. I volunteered to help because I’m in love with Jack and because I like to paint. I lay down on the dropcloth and unbuttoned my shirt.

“Want to fool around?”

“Always,” he said. There has never been a sweeter, kinder man. “But not right now. I’m pretty tired already.”

I took off my shirt and bra and painted for Jack. I strolled up and down with the extra-long paint roller. When the cracks in the ceiling lost their brown, ropy menace, I took the regular roller and did the walls. I poured Jack tea from my thermos and I touched my nipples with the windowsill brush.

He sat up against the bima, sipping sweet milky tea and smiling. His face so often shows only a tender, masked expressiveness, I covet the tiny rips and leaks of affect in the corner of his mouth, in the middle of his forehead. His hands shook. He shakes. Mostly at rest. Mostly when he is making an effort to relax. And sometimes after we’ve made love, which he does in a wonderfully unremarkable, athletic way, his whole right side trembles and his arm flutters wildly, as if we’ve set it free.

There it is, the allure of intense love complicated by adultery and death. The lovers’ time together must be kept secret, and is soon to end.

Bloom has compassion for her characters. She does not make them grotesque; rather, she takes characters who might be dismissed as such and makes them human, painfully like ourselves. Her compassion gives the stories warmth, even in the face of anguish.

In “When the Year Grows Old,” from Come to Me, a despised father, who mostly plods around judging and upsetting people, gets this passage: “When Kay was born, she could barely stop crying long enough to eat, and Martin would walk her all night, up and down the apartment stairs, while Laura put her head beneath two pillows and cried until dawn… The only picture he had ever carried was of Kay, four months old.” A brief incursion into his world that makes him feel, all of a sudden, relatable; he has cared for his daughter.

In “Light Breaks Where No Sun Shines,” (the basis for Bloom’s novel Love Invents Us, less successful, to me, than her stories), the middle-aged Mr. Klein pulls himself back from the brink of a sexual encounter with the underaged, awkward, overweight Susie, a tormented outcast among her peers and a source of shame to her parents. In Mr. Klein’s desire, we feel most strongly not lechery but adoration—and this is why he chooses to hurt Susie by ending their friendship, the lesser evil.

Come To Me is not as strong a book as the later collection. “Hyacinths” is a weak point, in the predictability of its disasters. Especially so if you’ve read a lot of Alice Munro, whose writing must have inspired this story. The austerity of rural Canadian life, the father’s profound, uneducated coldness, the fast-forward to adulthood, when the narrator stops mid-road-trip with his family and rescues one of his daughters from drowning in the pool. These things feel like echoes of Munro’s “Miles City, Montana,” a better story.

The narrator from “Hyacinths” appears in other stories that are more compelling: “Silver Water,” in particular, which portrays a daughter’s psychiatric illness—the awful loss of herself, the family’s desperation, the moments of humor. The scenes with new family therapists are irreverent, funny and brilliant. (“‘What do you think of Rose’s behavior, Violet?’ They did this sometimes. In their manual it must say, If you think the parents are too weird, try talking to the sister.”)

The opening story, “Love Is Not a Pie,” is also wonderful: the cozy, damp, shaded world of the children’s lake-cottage summer; the grownups’ secret, unconventional love, which, unlike the torment of a typical affair, feels peaceful and true. The Lionel and Julia stories in A Blind Man bring back the most memorable and catastrophic romantic liaison from the earlier book (its third story, “Sleepwalking,” a must-read).

Bloom’s dry psychological humor appears in full force in the later collection. In “The Gates Are Closing,” the narrator speaks on the phone with her mother:

“That Jack. Such a nice man. Is he feeling better?”

“He’s fine. He’s not really going to get better.”

“I know. You told me. Then I guess his wife will nurse him when he can’t manage?”

“I’m sure it is. But when he can’t get about, I’m saying when he’s no longer independent, you’ll go and visit him. And Naomi. You know what I mean, darling. You’ll be a comfort to both of them then.”

I sometimes think that my mother’s true purpose in life, the thing that gives her days meaning and her heart ease, is her ability to torture me in a manner as ancient and genteel as lace making.

This story, with its humor and sexiness and grief, radiates the kind of love that has the power to transform us. The energy of the narrator’s love is magnetic. It is this energy most of all that animates Bloom’s work—stories of struggle and loss, and throughout that, not always truimphant, but present, the perseverance of the heart. 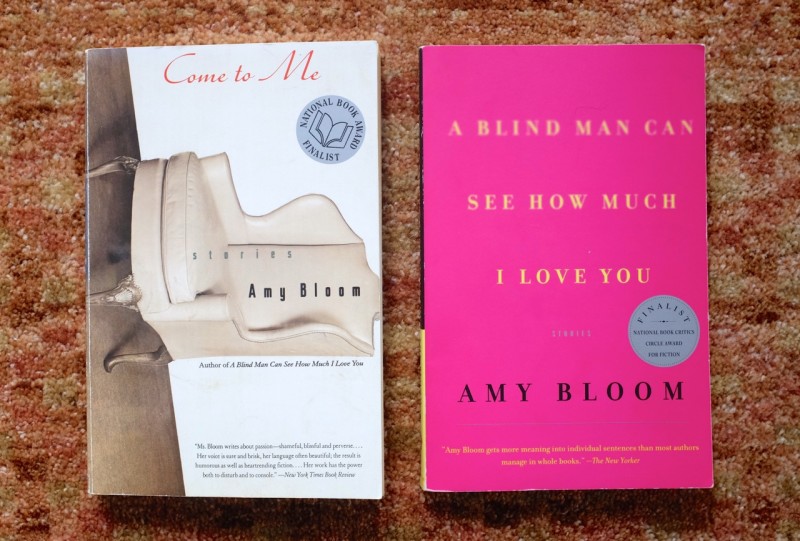