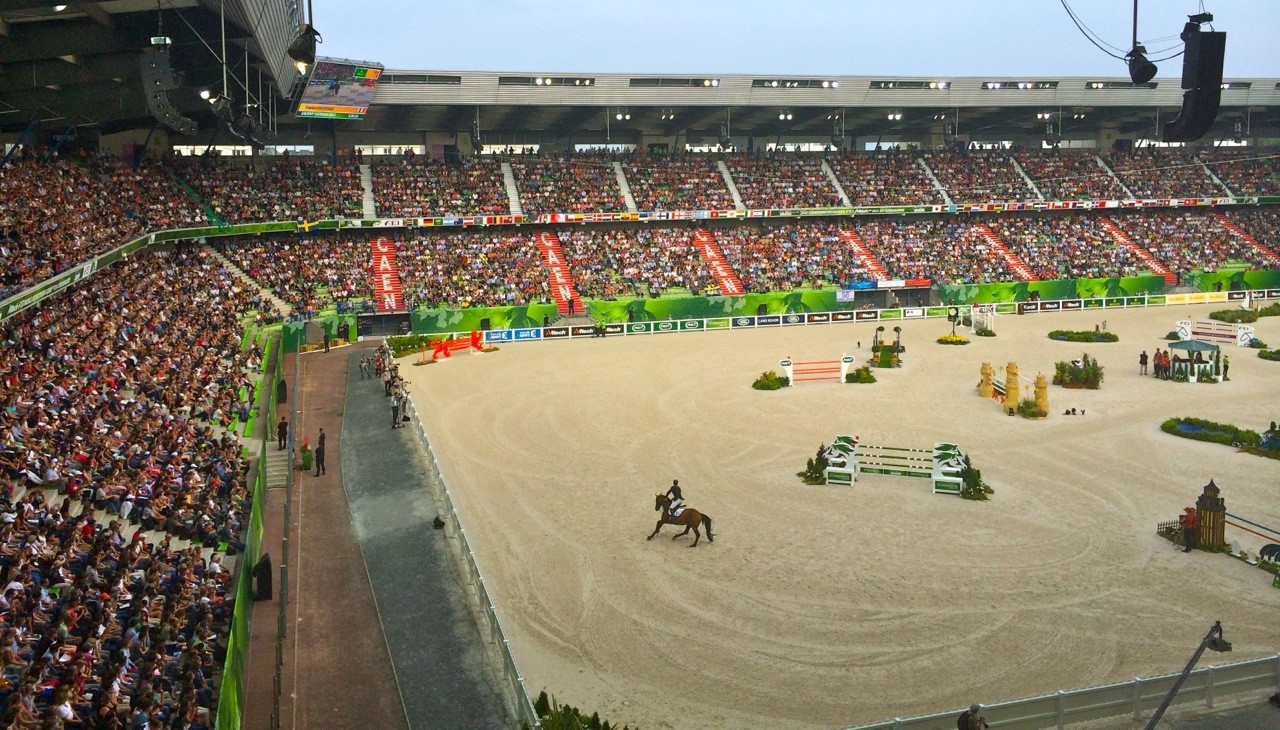 What a thrilling two weeks! The US swept the individual medals in reining for the first time. My friend Mandy McCutcheon took bronze with a totally fabulous run—aggressive and polished, for a big score of 227. Another milestone for the sport; that glass ceiling now has some serious Mandy-induced cracks. She represents our country with horsemanship and class, and besides all that, it was just really great to see my friend on the podium. 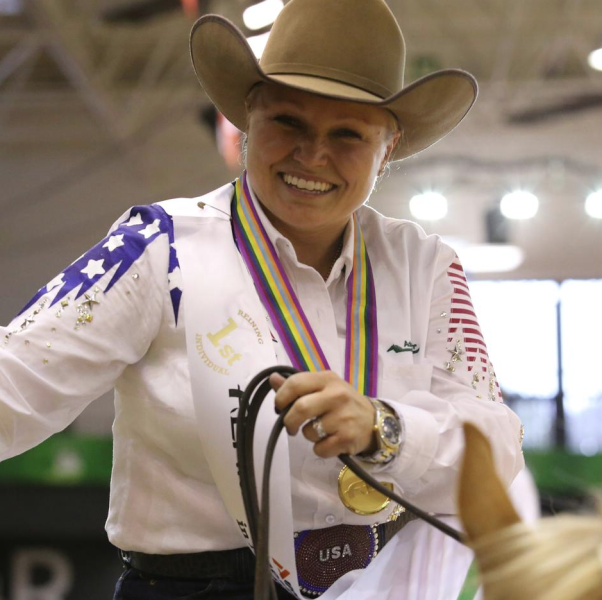 Then five days of show jumping in Caen’s packed stadium. Team USA won bronze, behind The Netherlands and France. Our own Beezie Madden made the final four, where the top four riders all ride each others’ horses. She had a tough draw (I’ll explain) and ended up with bronze, but it was a crowd-pleasing win for Holland’s Jeroen Dubbeldam, who rode smooth, stylish, and fault-free rounds on all four horses. France’s Patrice Delaveau won silver with just one time fault. Beezie’s horse, Cortes C, jumped clear for all four riders and was named Best Horse at the Games. 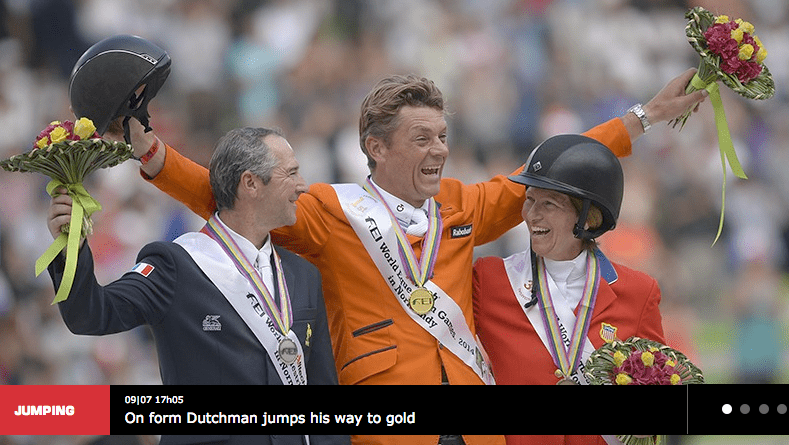 Jeroen rode brilliantly: graceful and accurate, in classic style, helping the horses jump their best. I’m always a sucker for finesse on horseback—that effortless, in-harmony-with-the-horse thing. Show jumping is objectively scored, not judged, but still I love to see such gorgeous riding win the day. One of the many reasons I’m a major fan of Beezie. (And Germany’s Marcus Ehning, who’s so balanced and soft he barely moves in the air over a five-foot fence. His last round here on his fabulous stallion Cornado was breathtaking.)

Marcus Ehning and Cornado in the warmup: 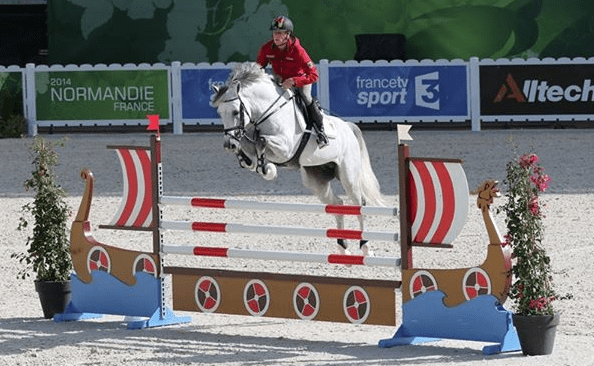 So, on Beezie’s tough draw. All four riders jump a shortened course on all four horses. The horses keep the same order, and the riders rotate. But here’s an important thing: the order in which riders inherit horses from each other stays constant, i.e., when Beezie got onto a new horse, Sweden’s Rolf-Goran Bengtsson was always the one who’d last ridden it. This is a big deal, because whoever rides a horse before you is essentially setting it up for you, for better or for worse. It takes time and repetition to overcome a “bad” setup—difficult to impossible in this context.

The order didn’t work in Beezie’s favor. Clearly any rider who makes the World Equestrian Games final four is riding at a very high level. But on this day, Rolf was the least polished. He overrode the triple combination—made the horses quick, too much forward and not enough up—and had rails down with his own horse and two others. (He jumped clear on Beezie’s Cortes C.) Beezie was unable to back them off quite enough to leave all the fences up. She edged out Rolf for bronze, but Jeroen and Patrice duked it out for the win. Neither had any jumping faults; that one time fault decided it. 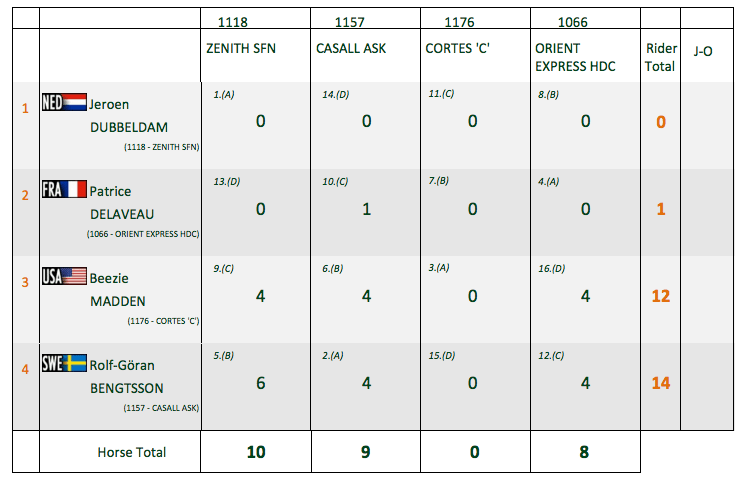 In the team competition, Beezie was the USA’s anchor rider, jumping last in our rotation. Here she is, cool under pressure, jumping a beautiful clear to secure the team bronze. Cortes has a very unconventional front-legs technique: he crosses them in the air.

Twenty thousand fans watched the show jumping. An educated crowd, too: collective “ooohs” and murmurs when a horse rubs a rail but leaves it up; then everyone going “shhhhhh” because the round isn’t finished yet. Fans paint their faces and wave flags. They know all the riders and cheer when the stars canter in, regardless of nationality. Though of course the Caen stadium went wild for the French team.

All week I scoured the start lists for bloodlines I like. (The lists show rider/horse/country, and the horse’s, gender, birth date and breeding.) The wildly popular stallion Cornet Obolensky had several offspring jumping, including two standouts for the German team: Daniel Deusser’s Cornet D’Amour and Marcus Ehning’s Cornado. I’d have loved to see them in the final four, but unlucky rails in the team competition kept them just out of contention.

Marcus Ehning and Cornado at the 2014 World Cup Finals:

And the winners of that 2014 World Cup Finals, Daniel Deusser and Cornet d’Amour: 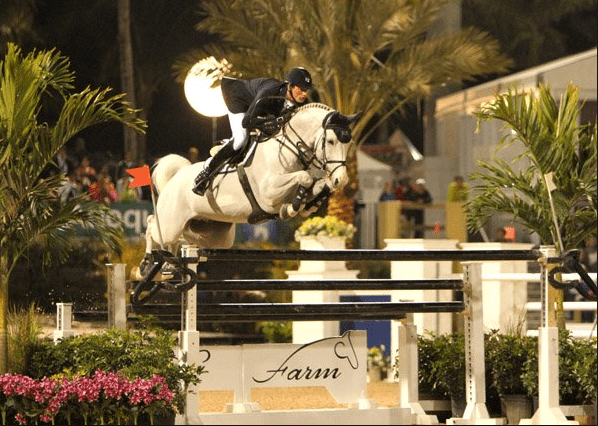 Another notable sire of Games horses was Ehning’s 2000 Olympic horse, For Pleasure, sire of Pénélope Leprevost’s mare Flora De Mariopsa, who jumped to team silver for France, and Lucy Davis’s sensational horse Barron, who earned team bronze for the USA and is arguably one of the best show jumpers in the world. For Pleasure won Olympic team gold twice for Germany (1996, Atlanta, with Lars Neiburg; and 2000, Sydney, with Ehning) and earned over 1.8 Million Euros of prize money in his career. 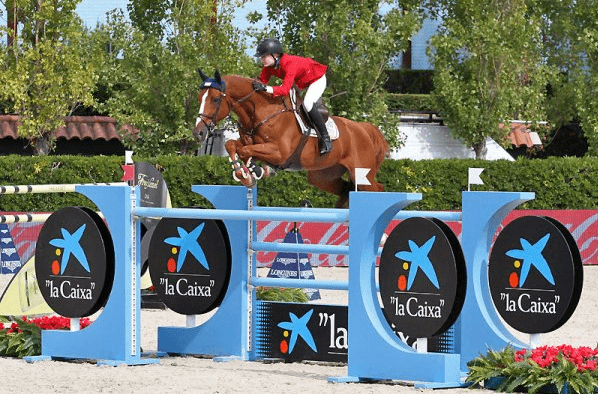 Fun fact: I bred to For Pleasure in 2011, and for a year or so thereafter, many people’s reaction was something like, “Ugh, he’s not producing anything, too bad you did that.” Well, ha! I try to breed for the qualities I’d want in horses for me to ride, like For Pleasure’s smoothness and scope (ability to jump big fences). My mare, Labelle, is small, feisty, and careful. I haven’t studied the minutiae of European jumper bloodlines as much as some people who spend their lifetimes on it—but I know what I like in a horse, and this cross seemed worth a try. The resulting filly and colt are two now. We’ll start to see next year what we’ve got.

Here’s our For Pleasure two-year-old with his half brothers by Cornet Obolensky and Sandro Boy (also formerly shown by Marcus Ehning, and sire of his speed-demon mare Sabrina): 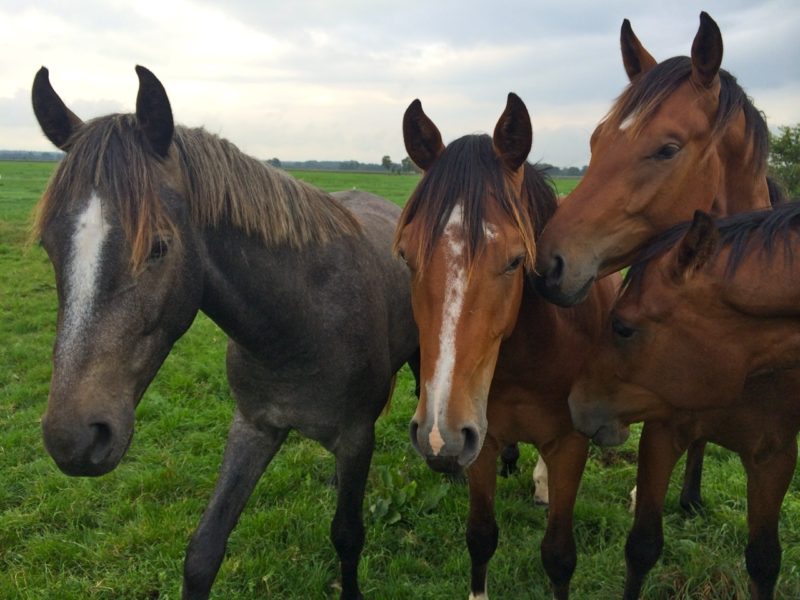 Nabab de Reve, sire of the 2010 World Equestrian Games champion Vigo D’Arsouilles, had several offspring competing, including Gerco Schroder’s Olympic silver medalist, London, who earlier this year caused a stir by selling at auction for $11.8 Million. The new Dutch owners kept the horse in Gerco’s lineup; Gerco described keeping the ride on this horse as the greatest gift he’d ever received. Nabab is also the sire of Barron’s dam. And the lineage continues with Vigo D’Arsouilles, whose own offspring jumped at the Games. (His son Ego Van Orti was absolutely flying for Edwina Tops-Alexander.) Our Nabab filly was born this year. We have another Nabab embryo due next spring. 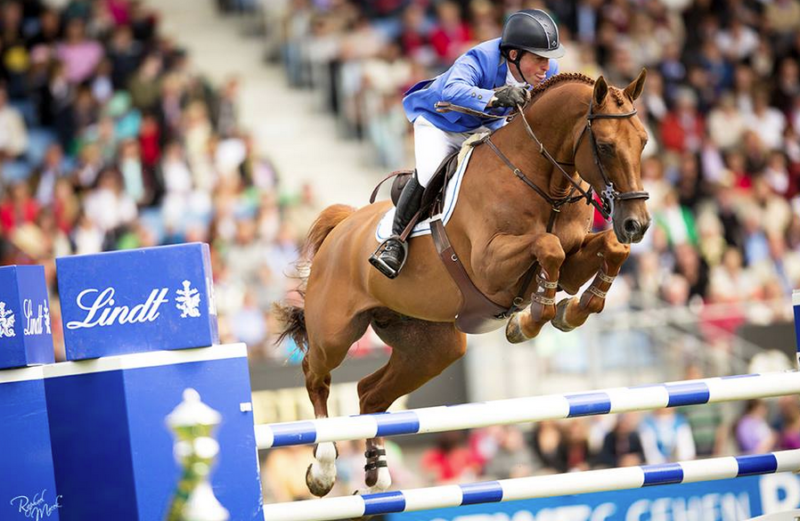 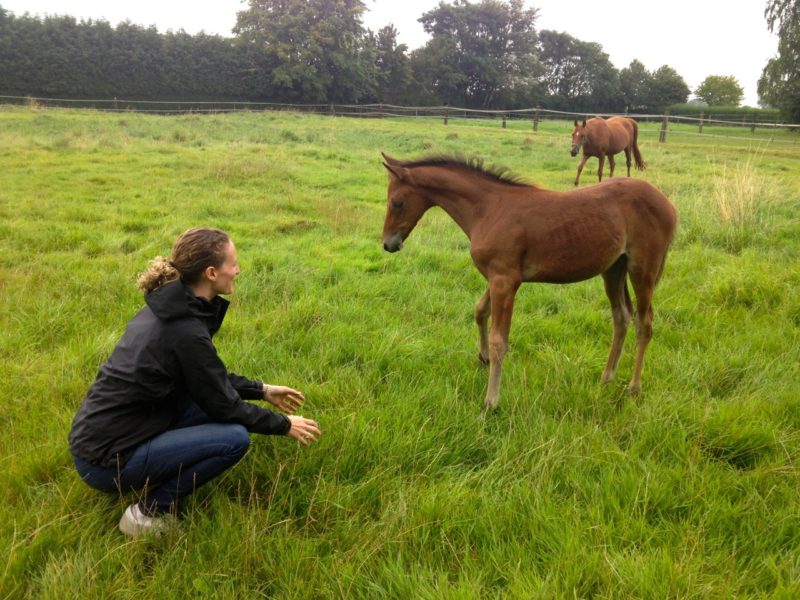 And check out this charming interview with Gerco about his horse, from the Global Champions Tour.

The 2006 World Games champion, Cumano, also had offspring in the lineup, as did his famous Holsteiner sire, Cassini. (Most notably the sensational mare Vienna Olympic, who jumped for Qatar. She is royalty on paper: by Cassini and out of a Contender x Cor de la Bryer mother).

And last but not least, the sons and daughters of Kannan, including Steve Guerdat’s Olympic champion Nino Des Buissonets, and Ireland’s rangy grey mare Molly Malone, ridden by 19-year-old Bertram Allen to win the first-day speed round and finish the Games in seventh place with a total of just two rails. 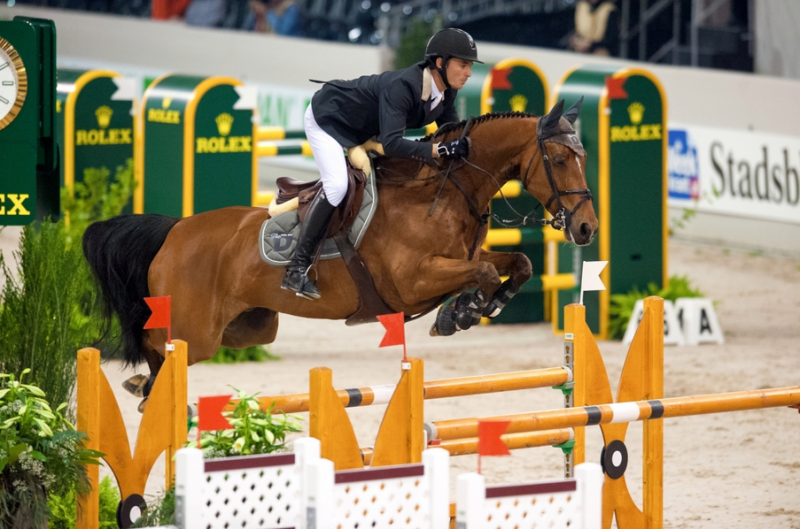 Our mare Fein Cera was Best Horse at the 2002 World Equestrian Games in Jerez. Here’s her six-year-old son, a stallion by Ustinov (from the great Libero bloodline), in training with German Olympian Janne Friederike Meyer in Hamburg. 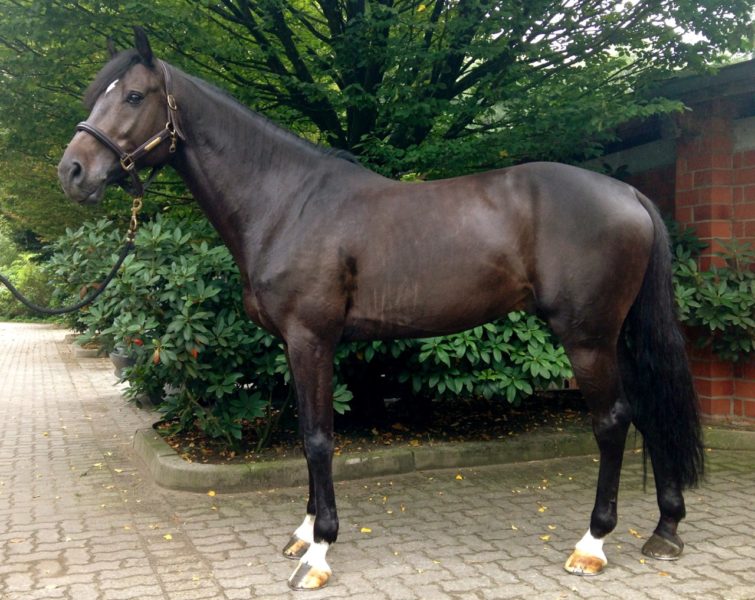 He’s jumping beautifully; can’t wait to watch Janne compete him in the 7-year-old classes next year!

And a final look at the 2014 stadium, as the medalists start their victory gallop: 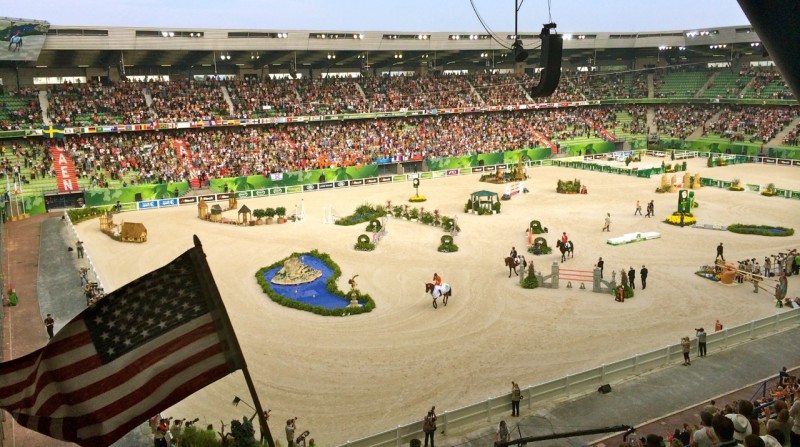